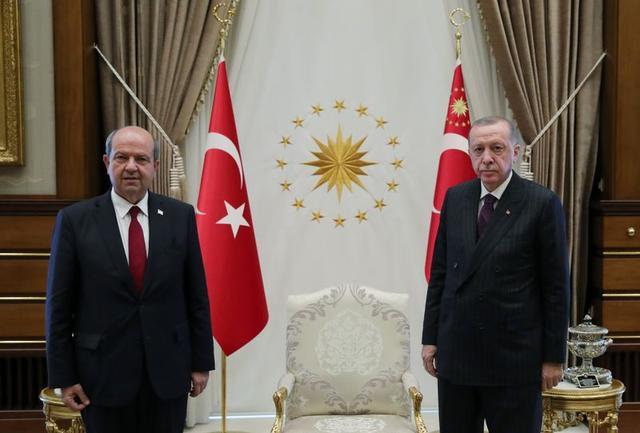 Turkish-held northern Cyprus, a breakaway state recognized only by Ankara, votes Sunday for a new leader in a run-off election held amid heightened tensions in the eastern Mediterranean.

The presidential vote pits the incumbent and favorite, Mustafa Akinci, 72 – who supports reunification with the majority Greek-speaking EU member the Republic of Cyprus in the south – against the right-wing Turkish nationalist Ersin Tatar.

Tatar, 60, who advocates a two-state solution, now holds the title of "prime minister" in the self-proclaimed Turkish Republic of Northern Cyprus (TRNC). He has controversially received the open backing of Turkey's President Recep Tayyip Erdogan.

Akinci's relationship with Ankara, on the other hand, has come under strain, especially after he described the prospect of the north's annexation by Turkey as "horrible" in February.

Turkey has now engaged in a bitter dispute over oil and gas reserves in the eastern Mediterranean, partly because its claim over the marine resource around TRNC's territory isn't recognized by Greece and Cyprus.

Sunday's second-round ballot was triggered after Tatar won 32 percent of the vote on October 11 ahead of Akinci, who garnered almost 30 percent in a field of 11 candidates.

But Akinci is in a stronger position in the second round, having won the backing of Tufan Erhurman, a fellow Social Democrat, who came third last time around.

"The results of the first round tell us this: half of the Turkish Cypriot community defend a federation despite all kinds of pressure," Umut Bozkurt, vice dean and assistant professor at Eastern Mediterranean University, told AFP.

"This election was dominated more by Turkey-northern Cyprus relations than the Cyprus issue."

The first round's results also show that a significant part of the electorate seek to be free of "pressure" from Ankara and to live in a united Cyprus, she added. 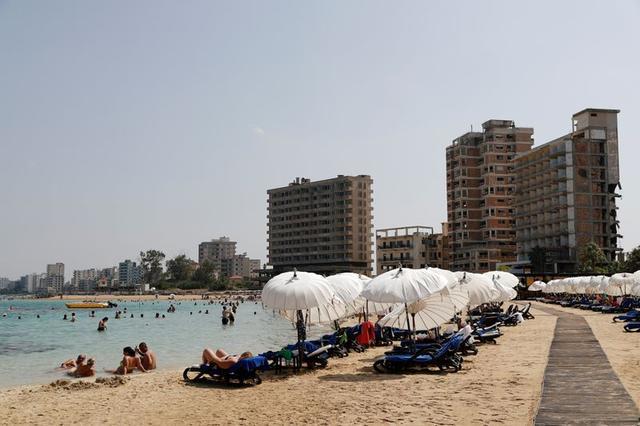 File photo: Varosha, an area fenced off by the Turkish military since the 1974 division of Cyprus, is seen from a beach in Famagusta, Cyprus, August 5, 2019. /Reuters

Don't want to be puppets

In the days leading up to the vote, Turkish Cypriot Twitter users used the hashtag #BarisCunku, meaning "Peace because" in Turkish.

One user calling himself Ahmet Karaca wrote on Thursday, "#PeaceBecause, we don't want to be puppets in our own country, we want to be the actor, the director."

When Akinci took office in 2015, he was hailed as the leader best placed to revive peace talks with the Republic of Cyprus.

But hopes were dashed in July 2017 after UN-mediated negotiations collapsed in Switzerland, notably over the question of the withdrawal of tens of thousands of Turkish soldiers stationed in the TRNC.

The polls come amid an economic crisis, deepened by the COVID-19 pandemic, which has largely shuttered the tourism sector and led to the closure of Ercan airport in the north and crossing points to the south.

The vote also comes after Turkey on Monday resumed gas exploration in the eastern Mediterranean, stoking tensions with Greece and the Republic of Cyprus in the south.

The European Union has deplored Turkey's deployment of exploration vessels and warned Ankara against further "provocations" while multiple countries have staged military drills in the region in recent months.

Earlier in October, Turkish troops angered the Republic of Cyrus and many Turkish Cypriots by reopening public access to the fenced-off disputed seaside town of Varosha for the first time since Turkish forces invaded the north.

That move drew EU and UN criticism and sparked demonstrations in the Republic of Cyprus, which exercises its authority over the island's southern two-thirds, separated from the north by a UN-patrolled buffer zone.

Turkey has repeatedly said it seeks to defend Turkish and Turkish Cypriots' rights in the eastern Mediterranean against a cabal of nations including Greece and Cyprus.