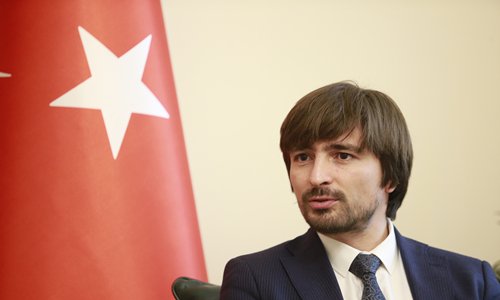 His country has opened its door to 3.5 million Syrians fleeing civil war to settle and seek a more peaceful life.

"Turkey's choice for hosting the refugees did not come from an economic perspective," Dr Mehmet Gulluoglu, president of Turkey's Disaster and Emergency Management Agency, told the Global Times.

"It's not something related to the economic level of Turkey. It's about moral and humanitarian values."

In August, the US announced the doubling of steel and aluminum tariffs already in place against Turkey, CNBC reported.

Washington also froze the assets of two Turkish officials in protest against the detention of US Pastor Andrew Brunson on alleged spying charges.

Concerns have reportedly grown that the sanctions may lead to an exodus of Syrian refugees from Turkey, as the country's economic situation worsens.

As of 2018, Turkey has spent $30 billion on its refugees, according to a Turkish parliament report.

The sanctions on Turkey won't reverse the country's decision to host Syrian refugees, Dr Gulluoglu said, but Turkey would not mind a little help.

The refugee crisis is "not only Turkey's problem," he said. "This is really a global problem."

Dr Gulluoglu, former director-general of the Turkish Red Crescent, the largest humanitarian organization in Turkey, called on other countries in the world to do their best to "decrease the root causes."

The 20-kilometer zone on the Syria-­Turkey border will be free from military attacks, according to the agreement.

While it's not a cease-fire, Dr Gulluoglu said it was a positive sign that would help "decrease the suffering of civilians and in the long term, the Syrian crisis."

Idlib's 3 million beleaguered civilians were unwilling to move to other places, he said.

"For people in Idlib, they come from different parts of Syria and they really want Idlib to be their last stop. For the future of Idlib and Syria, the discussions are really important," he said.

Turkey has set up 24 refugee camps in 10 cities and efforts to alleviate the suffering of Syrian civilians go beyond Turkey, he noted.

Inside Syria, they are trying to assist millions of people.

In addition to satisfying basic living requirements, Turkey is also helping with healthcare and education services.

In Turkey, more than 1 million school children are living as citizens and more than 600,000 are able to go to school.

At primary school level, more than 90 percent of Syrian ­children go to school.

Education is important as it prevents the children from becoming a "lost generation," Dr Gulluoglu said.

He also noted that there are some Syrian kids who saw only the war.

"For some of the kids, they don't know any fruit because they didn't see any fruit in their lives," he said. "In this modern era, if tens of millions of people in a country are living in this condition, it is shameful for mankind."

Turkey receives financial support from the European Union and the EU has increased its budget for helping refugees.

"But I cannot say that's enough because we are talking about 3.5 million Syrians. It is bigger than some European countries in terms of the population itself," he said.

Dr Gulluoglu just completed a visit to Beijing, during which he met Zheng Guoguang, vice minister of China's Ministry of Emergency Management, and shared experience in disaster relief.

Dr Gulluoglu praised the establishment of a new ministry for emergency management this year in the ministry shake-up.

"In Turkey, we had the same experience that different ministries and different departments give one organization under my organization," he said.

Disasters don't have borders and therefore it's of great significance to receive cooperation from China in disaster relief, Dr Gulluoglu stressed.

One disaster can affect several countries, he said. Turkey is prone to similar disasters as China: earthquakes, floods and landslides.

They shared experience and technology ideas, he said.

"I also invited the delegation from the Ministry of Emergency Management to Turkey to share how we manage the disasters, how we are ready for earthquakes and other types of disasters."