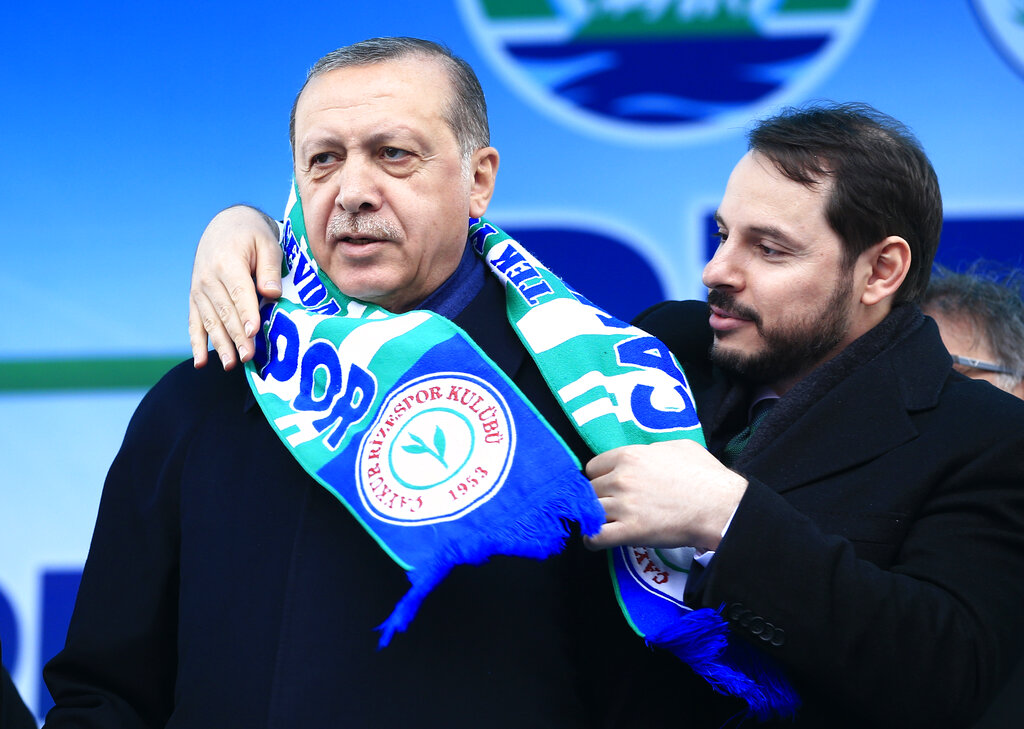 In this April 3, 2017 file photo, Berat Albayrak, right, Turkey's Energy Minister and son-in-law of Turkey's President Recep Tayyip Erdogan, left, places a soccer club scarf on his shoulders during a rally for the upcoming referendum, in his hometown city of Rize, in the Black Sea region, Turkey. (Photo: AP)

Berak Albayrak said on Instagram that he was stepping down from his post for health reasons and would spend more time with his family.

Albayrak, 42, was appointed minister of finance and treasury in July 2018, having previously been energy minister for nearly three years.

His resignation follows the dismissal over the weekend of central bank chief Murat Uysal and his replacement by former Finance Minister Naci Agbal.

“I decided not to continue my duty as a minister after five years in office due to health problems,” Albayrak said. “I will spend time with my mother, father, wife and children, whom I have neglected for many years out of necessity and who have never spared me their support.”

The resignation was confirmed by officials at the Finance Ministry, broadcaster HaberTurk reported, although it was unclear if it would be accepted by Erdogan.

In April, Interior Minister Suleyman Soylu resigned on Twitter, only to withdraw the announcement within hours after Erdogan refused to accept it.

Albayrak, who has four children with Erdogan’s daughter Esra, has presided over a rough period in the Turkish economy. The country was recovering from a currency crisis in 2018 when the coronavirus pandemic hit and Albayrak’s stewardship came under much criticism.

Before entering politics, Albayrak worked for Calik Holding, rising to CEO in 2007.

He became a lawmaker for Erdogan’s Justice and Development Party, or AKP, in 2015 and was shortly after appointed energy minister. According to some analysts, he was being groomed by Erdogan to be the president’s eventual successor.

Timothy Ash, an emerging markets analyst at BlueBay Asset Management, questioned whether Albayrak’s health was the real reason for him quitting and suggested a “purge of Albayrak and his team.”

Ash added that Albayrak’s close relationship with Jared Kushner, US President Donald Trump’s adviser and son-in-law, was no longer important to Erdogan following Trump’s defeat in the US election.