The death toll from severe floods and mudslides along Turkey's Black Sea coast has climbed to at least 57, the country's emergency and disaster agency said Saturday, as authorities disputed reports that dozens more people were missing. 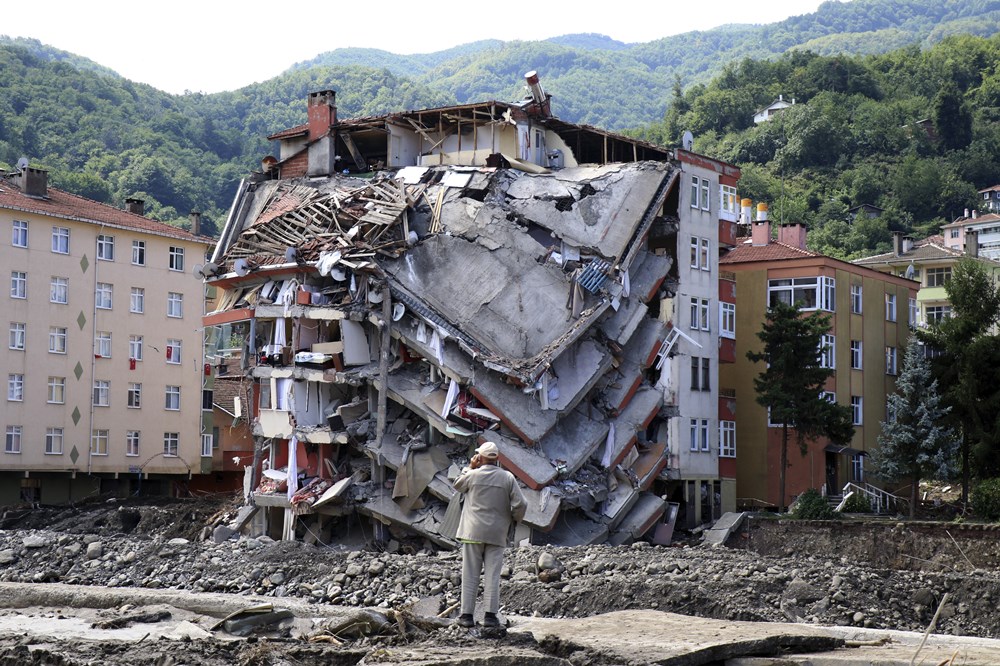 Torrential rains that pounded the Black Sea provinces of Bartin, Kastamonu and Sinop on Wednesday caused flooding that demolished homes, severed at least five bridges, swept away cars and rendered numerous roads unpassable. Turkish disaster agency AFAD said 48 people were killed in Kastamonu, eight in Sinop and one in Bartin.

Eight people remained hospitalized, according to the agency.

Speaking late Saturday in Kastamonu, Interior Minister Suleyman Soylu said 15 of the dead had not been identified yet. He slammed opposition parties, social media users and media for claims that hundreds could be missing. He said a total of 77 cases of missing persons remained in Kastamonu and Sinop but emphasized that doesn't necessarily mean they were dead. He added the previous number of missing persons was 143, including duplicate names and some reached alive.

The Kastamonu provincial governor’s office also said reports that there were 250 to 300 unidentified bodies were untrue. It did not specifically address how many people could be missing in the flooding.

Some residents in Kastamonu shared names and photos of missing people on social media since the floods began. The deputy chairman of Turkey's main opposition party, Engin Altay, said he was informed there were more than 300 people reported missing, adding the official numbers appeared to be lower. “The state needs to be transparent,” he said from Kastamonu hours before the interior minister spoke.

In Sinop, floodwaters almost completely wiped out the village of Babacay, leaving toppled homes, damaged bridges and rubble in their wake. A five-story apartment building constructed on a riverbed was destroyed, along with numerous homes.

Rescue teams and sniffer dogs kept up their painstaking task of trying to locate the missing. AFAD said 5,820 personnel, 20 rescue dogs, 20 helicopters and two search planes were at the disaster spots.

About 2,250 people were evacuated across the region amid the floods, scores of them lifted from rooftops by helicopters. Many are being temporarily housed in student dormitories.

Climate scientists unequivocally say that climate change is leading to more extreme weather events as the world warms because of the burning of coal, oil and natural gas.

Experts in Turkey, however, said human interference with rivers and improper construction also contributed to the massive flood damage.

Geologists say construction narrowed the river bed and the surrounding alluvial flood plain of the Ezine stream in Kastamonu’s Bozkurt district, where the damage was most severe, from 400 meters (1,312 feet) wide to 15 meters (49 feet). Residential buildings were also built along the waterfront.

During severe rains, the constricted stream can only overflow. Videos posted by residents showed water rushing downstream in Bozkurt as buildings and roads flooded. One geologist, Ramazan Demirtas, explained the river bed narrowing on Twitter and said humans were to blame for this week's disaster.

Across the Black Sea, days of heavy rain also produced flooding in broad areas of southern Russia. Authorities in the Krasnodar region said Saturday that more than 1,400 houses flooded following storms that swept the area this week. About 108,000 residents of 11 settlements were left without power.

The regional Russian emergency headquarters said over 1,530 people have been evacuated. The Black Sea resort city of Anapa was among the worst affected. Officials have warned that heavy rain was expected for another two days.

The floods struck on the heels of wildfires in southern Turkey that devastated forests in the seaside provinces of Mugla and Antalya, which are popular with tourists. At least 16 people died in those wildfires — including eight emergency workers as their firefighting plane crashed Saturday — and thousands of residents and tourists were forced to flee.