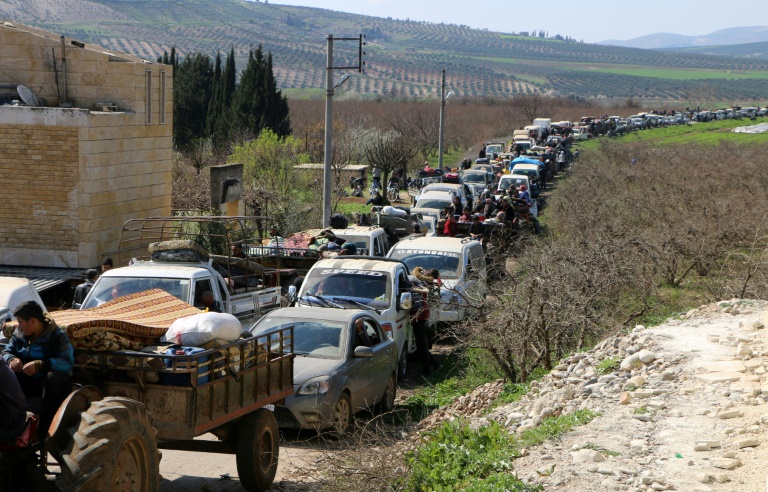 Syrian civilians ride their cars through Ain Dara in Syria's northern Afrin region as they flee Afrin city on March 12, 2018 amid battles between Turkish-backed forces and Kurdish fighters (Photo: AFP)

Turkey said Tuesday its army and allied rebels had surrounded the Kurdish city of Afrin in northern Syria, raising the prospect of another devastating siege in the country's long conflict.

With Syria's war set to enter its eighth year this week, fighting continues on several fronts, including around Afrin and in Eastern Ghouta near Damascus, where dozens of civilians including people with medical conditions were evacuated on Tuesday.

While attention in recent weeks has focused on a ferocious regime assault on rebel-held Ghouta, in Syria's north Turkish forces and allied Syrian rebels have been advancing in their offensive against the Kurdish enclave of Afrin.

In a statement Tuesday, the Turkish military said it had completely encircled Afrin city, home to some 350,000 people and defended by a well-armed Syrian Kurdish militia, the People's Protection Units (YPG).

Birusk Hasakeh, a YPG spokesman inside Afrin, denied the city had been totally besieged but said the last route leading out of it was being shelled heavily.

"If they do encircle the city, we will be ready for a long fight. We will resist," he told AFP.

The Syrian Observatory for Human Rights said Turkish forces had moved to within firing range of that last access route, which leads to a pair of regime-held towns -- essentially encircling Afrin and 90 villages to its west.

Sealing off Afrin city would be a key step in Turkey's "Olive Branch" operation, launched on January 20 and aimed at ousting the YPG, a vital partner for a US-backed coalition against the Islamic State group, but seen by Ankara as "terrorists".

It remains unclear what Turkey's next move will be, but it may lay siege to Afrin while allowing civilians to leave to avoid a high-casualty offensive.

The Britain-based Observatory said Ankara was seeking to push civilians into either rebel-held or Syrian regime territory to allow for a "speedy military operation".

"We will allow civilians... to leave so they will not be hurt in case (Kurdish) fighters hold out in the villages, neighbourhoods, or buildings inside Afrin," he told AFP.

Since February 18, Russian-backed regime forces have recaptured more than 60 percent of the enclave, whittling down rebel territory to three isolated pockets.

The UN Security Council passed a resolution last month calling for a 30-day truce to allow for aid deliveries and medical evacuations from the enclave -- but the ceasefire demand went unheeded.

The area has been under government siege since 2013, making food scarce and hospitals too strapped to properly treat sick and wounded people.

The UN has said more than 1,000 people in Ghouta were in desperate need of being taken out of the area for medical care.

On Tuesday, dozens of civilians, including people with medical conditions, were evacuated through a "humanitarian corridor" established by the regime and its ally Russia.

The Syrian Arab Red Crescent, which was involved in the evacuations, published images of its volunteers carrying an elderly woman into an ambulance and pushing an elderly man in a wheelchair.

The Observatory said 150 civilians had exited a pocket of Ghouta that comprises its largest town Douma and is held by rebel faction Jaish al-Islam.

Jaish al-Islam had earlier announced some "critical medical cases" would be evacuated.

More than 1,180 civilians have been reported killed since the Ghouta assault was launched, but international efforts have failed to stop the violence.

On Tuesday, the UN Deputy High Commissioner for Human Rights Kate Gilmore voiced concern for some 125,000 children trapped in Ghouta.

"Is it not tantamount to a monstrous indifference to the suffering of children that Security Council resolutions for ceasefires are flouted?" Gilmore asked.

The United States presented a new draft resolution to the Security Council on a ceasefire to halt what France has called a "bloodbath" in Ghouta.

Over 350,000 people have died since Syria's conflict broke out in 2011. With Russia's help, Assad has retaken most of the territory he had lost in the early years of the uprising.

Syrian troops have used siege tactics in several areas, sealing off rebel-held territory and pressing a military operation before securing an evacuation deal.

The government has reportedly been pursing separate negotiations over Ghouta's three rebel-held pockets, focused on local truces or potential evacuations for rebels and civilians

Forces loyal to President Bashar al-Assad have meanwhile been pressing an assault to retake Eastern Ghouta, the last major rebel stronghold near Damascus.