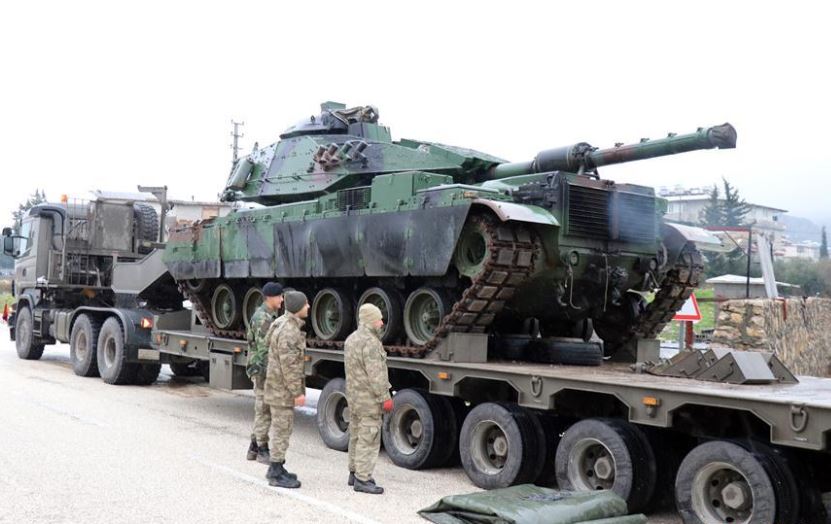 ISTANBUL, Jan. 5 (Xinhua) -- Despite the military buildup along the Turkey-Syria border, a Turkish cross-border operation against the Kurdish militia in Syria is unlikely, given the US protection of the Kurds and Russia's apparent opposition, analysts said.

ALL AGAINST TURKISH MOVE

Turkey is not likely to launch an immediate operation targeting the Kurdish militia, known as the People's Protection Units (YPG), or the militant group Islamic State (IS), under the current circumstances, Cahit Armagan Dilek, director of the Ankara-based 21st Century Turkey Institute, told Xinhua.

In recent weeks, Ankara has reinforced its troops with howitzers and tanks along the Syrian border dominated by the US-backed Kurdish forces.

The reinforcements had increased in particular after US President Donald Trump announced in late December that US troops would leave Syria and that Ankara had agreed to take over the task of eradicating the IS remnants.

However, Washington reaffirmed earlier this week its support for the Kurdish militia, which Ankara sees as a terror group associated with a Kurds-led insurgency on its own territory. But the Kurdish fighters have closely cooperated with the US troops in the fight against IS.

"We want to protect the Kurds," Trump said on Wednesday while underlining his determination to withdraw troops from war-torn Syria.

Trump's latest remarks showed Washington is looking for ways to prevent a Turkish cross-border offensive against the YPG, said Dilek, a former officer in the Turkish military.

Thanks to the US military support, the YPG managed to set up three self-declared autonomous cantons in Syria, with the one in Afrin overrun by Turkish troops and their allied Syrian rebels in March 2018.

US Secretary of State Mike Pompeo stated on Thursday that "ensuring that the Turks don't slaughter the Kurds" continues to be part of the American mission in Syria.

Turkey's move to deploy massive troops at the border may be aimed at intimidating the opposite side and forcing it to give up without fighting, Yasar Yakis, a former Turkish foreign minister, told Xinhua.

Not only the United States, but also other major actors in Syria, namely Russia, Iran and the Syrian government, are against a Turkish military intervention, said Dilek.

As far as the reinforcements are concerned, Ankara has shifted focus from Manbij to Syria's northeast after Moscow-backed Syrian army stood ready to take over Manbij from the YPG last week, he noted.

Moscow said the US-controlled territories should be given back to Damascus following the withdrawal.

Yakis advised Turkey to avoid a confrontation with the Syrian army or Russia on the Syrian land and confine its hostility to the YPG in northeastern Syria and the IS.

A conflict with Damascus means a denial of Ankara's commitment to the Syrian territorial integrity and sovereignty, while a confrontation with Russia would "shake the foundation of Turkey's successful cooperation with Russia in several areas," he cautioned.

Local media reported early last week that 15,000 Ankara-backed militants, members of the so-called Free Syrian Army, were deployed near Manbij along with Turkish troops to prepare for driving the YPG out of the area.

Following the US decision to pull out troops, the Kurdish militia has been in talks with Damascus and Moscow reportedly over returning the territory under its control to Damascus to avoid a Turkish offensive.

The YPG has two cantons to the east of the Euphrates River along the Turkish border and an autonomous administration in Manbij.

Dilek maintained, based on early press reports, that the United States may be seeking to create a buffer zone in northeastern Syria to separate the Turkish troops and the YPG.

Manbij is another area where Washington is planning to deploy troops from some Arab nations, according to the reports.

Dilek feels that Ankara's threat of launching an operation against the YPG is more politically motivated as Turkey is scheduled to hold local elections in late March, and that Ankara would shelve the planned operation due to Washington's prioritization of the battle against the IS.

The United States has more than a dozen military bases and several thousand troops in Kurdish-held areas in Syria.

Trump said on Wednesday that the US troops would exit "over a period of time," denying earlier reports that the withdrawal would be completed within four months.

Yakis believed that Washington would encourage Ankara to focus on fighting the IS and keep away from the YPG.

"One may presume that the United States will regard the elimination of the IS as a higher priority than fighting the YPG, especially in light of Trump's statement that they will continue to protect the Kurds," he said.

Trump's national security advisor John Bolton is scheduled to hold talks in Ankara on Tuesday over coordination in Syria amid the US pullout.

"The best scenario would be to find a negotiated solution to the problem without resorting to a military operation," Yakis said, noting the YPG, battle-tested in fighting against the IS, is armed to the teeth by Washington.

Turkey could easily win international support if it comes up with a clear-cut strategy about how it is planning to eliminate the YPG threat, he argued.

"Is it by killing all the YPG members, or by disarming them, or expelling them from Syria?" he asked.

On a possible Turkish operation against the IS, both analysts referred to the fact that the militants are at least 300 km away from the border and Turkish troops need to pass through the YPG-held territory.

"Such an operation would not be sustainable economically or militarily for Turkey," Dilek said, arguing that Ankara's attempt to fight the IS in Syria would face opposition as well from Moscow, Tehran and Damascus.

Yakis cautioned that a military operation in such distant areas "will stretch thin Turkey's supply lines and will make the Turkish army vulnerable in a hostile environment."