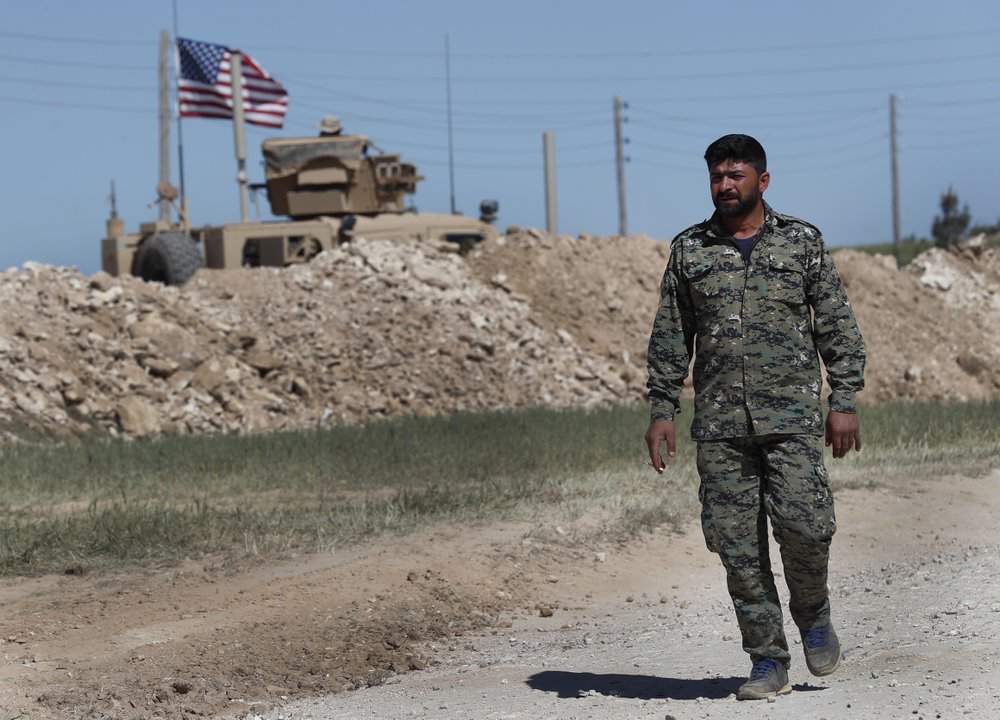 In this April 4, 2018 file photo, a US-backed Syrian Manbij Military Council soldier passes a US position near the tense front line with Turkish-backed fighters, in Manbij, north Syria. (Photo: AP)

Turkey’s combative president is threatening to launch a military operation in northeastern Syria that is designed to push back US-allied Syrian Kurdish forces — an invasion that carries major risks for a highly combustible region in war-devastated Syria.

An operation would mark the third Turkish incursion into Syria in the past four years — all seeking to limit the growing influence of Syrian Kurdish fighters, which Turkey views as terrorist along its border. Turkish and American military officials were meeting Monday and Tuesday in Ankara for last-ditch negotiations amid warnings from Turkish officials about a military buildup.

Here’s a look at what Turkey wants and what could happen if it invades northern Syria:

WHAT DOES TURKEY WANT?

Turkey wants to establish a safe zone 19 to 25 miles (30 to 40 kilometers) deep east of the Euphrates River in Syria, all the way to the Iraqi border. That effectively amounts to almost all the territory in northeastern Syria that is currently controlled by Syrian Kurdish fighters from the People’s Protection Units, or YPG.

The YPG forms the backbone of the Syrian Democratic Forces, or SDF, America’s only partners on the ground in Syria. This has deeply infuriated Turkey and been a major source of tensions between Washington and Ankara in the past few years. With US backing, the SDF has spearheaded the fight against the Islamic State group on the ground, announcing the territorial defeat of the extremist group in March.

Turkey considers the YPG an existential threat and as terrorists with close links to a decades-long insurgency within its own border led by the Kurdistan Workers’ Party, or PKK.

HOW WILL THIS BE DIFFERENT TO PREVIOUS TURKISH INVASIONS?

This time the purported Turkish operation would target areas east of the Euphrates River where hundreds of US troops are stationed, raising the possibility of an unintended confrontation between two NATO members playing out in the area.

Months-long talks between the US and Turkey over the creation of a so-called safe zone in northern Syria that addresses Ankara’s concerns have failed to reach an agreement, with Turkey’s foreign minister calling the US proposals unsatisfactory last month.

WHAT ARE TOP ISSUES IN THE TALKS?

After inconclusive talks last month with James Jeffrey, the US Special Envoy to Syria, Turkey’s defense minister told his American counterpart that the YPG must give up their arms and leave the proposed safe zone.

The sides have been unable to agree on the size of the zone, how it would be patrolled and who would control it. Turkey demands that its military run the proposed safe zone, while coordinating with the US.

“If we cannot meet at a common point with the US, we will have to set up the safe zone alone,” Turkish Defense Minister Hulusi Akar told US Defense Secretary Mark Esper, the Turkish ministry said.

Esper told reporters Tuesday the US would “prevent unilateral incursions that would upset, again, these mutual interests that the United States, Turkey and the SDF share with regard to northern Syria,” He said Washington wanted to work with Ankara to address Turkey’s “legitimate security concerns” on the PKK.

IS A TURKISH MILITARY OPERATION IMMINENT?

Turkish President Recep Tayyip Erdogan has been threatening an offensive into northeastern Syria since at least September, aiming to prevent a “terror corridor” along Turkey’s southern border and wanting to create safe zones. In December, he said the operation would happen “within a few days” but shelved the plan after a call with US President Donald Trump, who was then looking for a way out of Syria.

On Sunday, Erdogan upped the ante. “We’ve entered Afrin, Jarablus, al-Bab. Now we will enter the east of the Euphrates,” he said.

Erdogan was referring to two cross-border operations into northern Syria in 2016 and 2018 along with allied Syrian opposition fighters. Turkey ousted IS and YPG from these areas and established two Turkey-controlled zones in northern Syria.

“We can be patient up to a point and that patience has a limit,” Erdogan said, arguing Turkey would protect itself from YPG “harassment.” Last month, five people were lightly wounded in the Turkish border town of Ceylanpinar after a rocket thought to have been fired from YPG-held territory exploded.

While both Turkey and the Syrian Kurds say they have completed preparations for a military confrontation, there are no large-scale military movements suggesting an imminent kick off.

WHAT ARE THE MAJOR RISKS OF A TURKISH INVASION?

A Turkish operation east of the Euphrates, where American troops are stationed alongside the Kurdish fighters, heightens risks of a confrontation between two NATO members.

The Syrian Kurdish fighters have vowed to fight a Turkish incursion, increasing the risk of drawing retaliatory fire that could threaten US forces. There are hundreds of American military personnel in the area, including troops manning US observation posts in towns and cities along the border.

Considering the high level of risk, Turkey may opt for a limited operation to take control of the mostly-Arab border town of Tal Abyad, just east of Manbij. But even that risks igniting battles in which American personnel find themselves caught between two hostile parties.

HOW WOULD A TURKISH MILITARY OPERATION AFFECT SYRIANS?

A wide-scale Turkish operation is likely to cause new waves of displacement for those in northern Syria, sending thousands, if not tens of thousands, of people fleeing to safer ground — likely to SDF-controlled areas further south.

Ankara hopes that some of the 3.6 million Syrian refugees it is already hosting would go back if Turkey can secure these areas. The government says some 337,000 people have already returned to the two Turkey-controlled zones west of the Euphrates.

WHAT ABOUT THE FIGHT AGAINST THE ISLAMIC STATE GROUP?

An offensive against the Kurdish fighters will likely also undermine the war against the Islamic State, giving the group’s sleeper cells the chance to regroup and resurge. SDF forces have also suggested that in case of a Turkish assault, they would not be able to guarantee that thousands of IS prisoners now in SDF-run detention centers would remain under control.