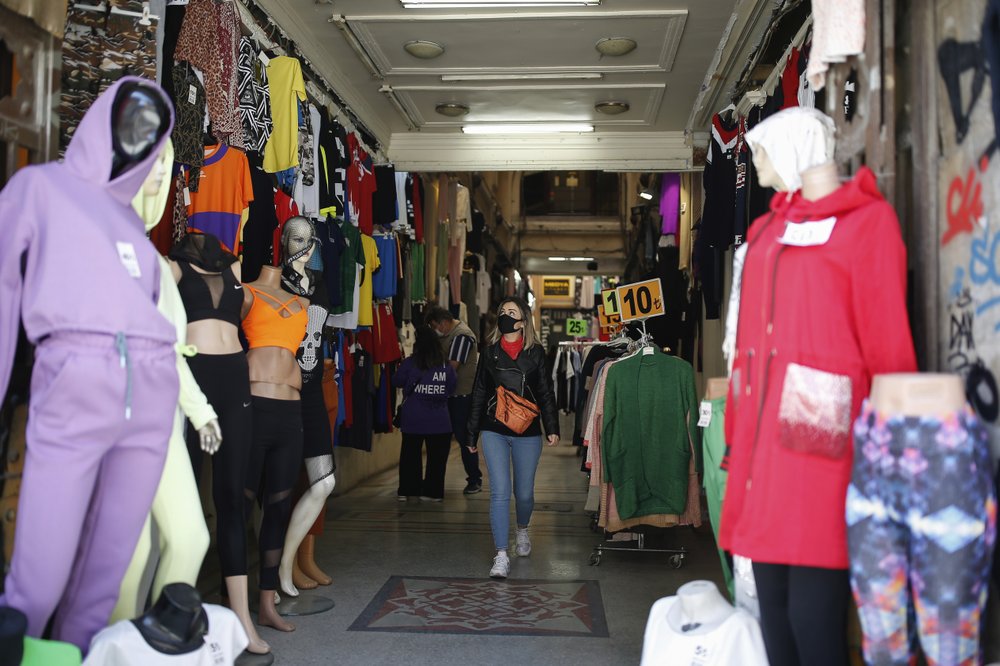 In this Friday, April 10, 2020, photo, a customer wearing a protective mask due to the coronavirus outbreak shops in Istiklal Street, the main shopping street in Istanbul. (Photo: AP)

Turkish Interior Minister Suleyman Soylu resigned late Sunday, taking responsibility for a poorly timed announcement of a weekend coronavirus curfew that prompted thousands of people to rush into the streets.

Soylu is one of the most senior figures in Turkish President Recep Tayyip Erdogan’s government.

In a statement posted on his Twitter account, Soylu said: “Responsibility for implementing the weekend curfew decision, which was aimed at preventing the epidemic, belongs entirely to me.”

The 48-hour lockdown of 31 cities was announced just two hours before it took effect on Friday night. Thousands of people ran out to stores to stock up on goods, many without wearing mandatory face masks.

Images of large, closely-bunched crowds sparked criticism of the government’s planning for the lockdowns.

Soylu, who was appointed interior minister in August 2016, said his “countless experiences should not have led to such scenes.”

Soylu, 50, joined Erdogan’s Justice and Development Party in 2012, having switched from the center-right Democrat Party. Since then, he has risen to be viewed by some as a potential successor to Erdogan and as a rival of the president’s son-in-law, Finance Minister Berat Albayrak.

THIS IS A BREAKING NEWS UPDATE. AP’s earlier story follows below.

ISTANBUL (AP) — Turkey introduced a lockdown over the weekend that took many by surprise since the country had previously adopted a more relaxed approach to fighting the coronavirus than its neighbors in Europe and the Mideast.

The sudden announcement of a 48-hour curfew in 31 cities, including Ankara and Istanbul, on Friday evening, led to crowds rushing to grocery stores to panic-buy provisions. Many ignored social distancing rules and were not wearing mandatory masks.

Prior to the declaration, a curfew had been imposed on those under 20 and over 65, crucially exempting most of the workforce as Turkey sought to keep its beleaguered economy on track. It’s still not clear what will happen Monday when the short-term lockdown is set to expire.

Turkey has charted its own course to navigate the pandemic, relying on a strategy of limiting access and mobility nationwide that until Friday stopped well short of a mandatory lockdown.

Citing economic concerns, President Recep Tayyip Erdogan has resisted calls for more drastic measures. But with the number of infections rising sharply — and likely still weeks away from their peak in the country — many believe he will not be able to hold off declaring a permanent lockdown much longer.

Confirmed infections in Turkey have jumped to over 52,000 with more than 1,100 deaths since the first case was announced on March 11, prompting the World Health Organization to warn last week that it was “alarmed that Turkey has seen a dramatic increase in virus spread over the last week.”

Erdogan has repeatedly called on Turks to observe their “own state of emergency” by staying at home voluntarily but has also said the country would consider tighter measures if those in place fail to curb the contagion.

“Our most important sensibility is the continuation of the supply of basic needs and ensuring the uninterrupted continuation of production to support exports,” Erdogan said last week. “Turkey is a country which in all conditions and circumstances must maintain production and ensure that the wheels (of production) carry on turning.”

Turkey was one of the first to take measures against the coronavirus by closing its border with hard-hit Iran and halting flights from China and Italy. It has since shut down all international arrivals, restricted domestic flights and set up road checkpoints outside cities to prevent unessential travel.

Authorities have closed schools, cafes, nightclubs, and barber shops, and canceled sports events and prayers at mosques. The government has banned anyone 65 or older — the most vulnerable to the disease — from leaving home and later extended the ban to people under 20 after many youths, falsely believing they were safe from the virus, continued to socialize.

At least 156 towns or villages have been placed under quarantine, with residents unable to leave their homes. Face masks are now compulsory in public places such as supermarkets, and the government is distributing them free of charge.

However, before the weekend’s full lockdown, many stores and businesses remained open in Istanbul, home to 15 million, and people were able to take public transportation and freely stroll the shores of the Bosporous.

Mayor Ekrem Imamoglu said about 64% of residents were still out and about amid the partial restrictions. With about 60% of the country’s coronavirus cases, Istanbul is the epicenter of Turkey’s outbreak, and Imamoglu has been pleading for a comprehensive stay-at-home order in the city, if not the whole country.

“We are insisting on a curfew to decrease this activity ... to completely shut down the engine,” the mayor told The Associated Press.

“The only method to cut this off (the loss of lives) is for people to totally sever contact,” said Imamoglu, a key opposition figure who could challenge Erdogan in the general election in 2023.

The new coronavirus causes mild or moderate symptoms for most people. For some, especially older adults and people with existing health problems, it can cause more severe illness or death.

Worldwide, at least 1.7 million people have been infected and 109,000 have died from the virus, according to Johns Hopkins University. Those reported numbers underestimate the true scope of the outbreak, due to limited testing, uneven counting of the dead and some government's desire to hide the scope of their outbreaks.

Coronavirus-related restrictions have varied by country. While most European nations have imposed strict constraints on movement, Turkey’s earlier approach was comparable to that of Sweden, where authorities have advised the public to practice social distancing but schools, bars, and restaurants are open and only gatherings of more than 50 people are banned. The outbreak in the Scandinavian nation has claimed 887 lives.

Can Selcuki, head of the Istanbul Economics Research think-tank, said the government strategy of gradually limiting mobility aims “to stop the economy from coming to a full stop for as long as possible.”

“But if the curve doesn’t flatten and the numbers keep rising, then (a total lockdown) is definitely in the books,” he said.

Erhan Baba, a 25-year-old accountant in Istanbul, said he has no choice but to go to work despite the risks of infection.

“I have to be outside. I have to use public transport. I have to go to the banks,” he said, pinching his mask to stop it from slipping. “I am forced to go out to do my job to earn my daily bread.”

Interior Minister Suleyman Soylu said more than 6,000 elderly have been fined and 149 more prosecuted nationwide for violating the age-related curfew, along with some 3,000 fines and 102 prosecutions for young people. On Sunday, the ministry said 18,770 people had been penalized for breaching the weekend curfew.