It was one of the busiest days in a pandemic hospital in Istanbul, with hundreds of people waiting at COVID-19 vaccination rooms and on the benches in the garden for their appointments. 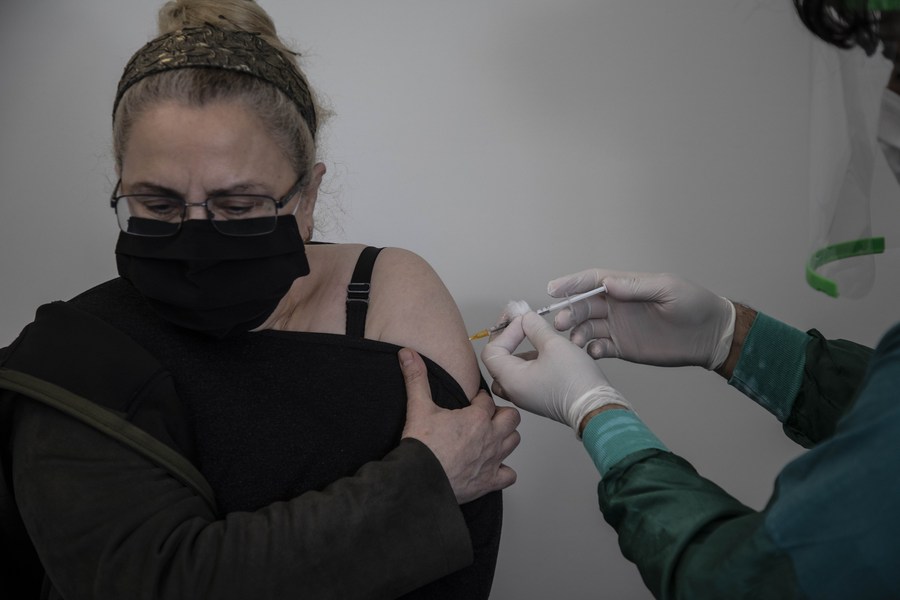 Feriha Oz Emergency Hospital, established last year and with a capacity of 1,008 beds on the Asian side of the city, has never seen such a crowd since the nationwide inoculation drive started in January, according to Mehtap Karaca Demiray, a nurse in charge of the vaccination operation.

"Today, we have more than 1,400 appointments," Demiray told Xinhua on Thursday. "We started at 8:30 in the morning, and we will finish at midnight."

Turkey began its drive with China's Sinovac vaccine on Jan. 14, with priority given to health care professionals and the elderly.

Until the beginning of April, the country solely used Sinovac's CoronaVac jabs. It later included the Pfizer-BioNTech vaccine in the program and will add Russia's Sputnik V in the coming days.

Twenty-five million vaccines have been administered in the country so far.

Turkish doctors agree that they now have enough data in the field to review the efficacy of CoronaVac more precisely.

"Based on our field observations, we can say that the Sinovac vaccine prevents deaths and intensive care hospitalization 100 percent," Nurettin Yiyit, chief physician of the hospital, told Xinhua, referring to the general situation in the country.

"The phase studies had already proved its efficacy, but our field notes are even better," he continued while inspecting the ongoing vaccinations.

Speaking about the situation in his two hospitals, he said around 4,000 health workers received their second doses in February. Since then, only 60 COVID-19 cases were reported among them, with no hospitalizations and fatalities.

Protection from the jabs became more apparent during the third peak of the pandemic, which began in March. The daily infection number exceeded the threshold of 60,000 across the country, and the government had to declare a full lockdown until May 17 to curb the rising cases.

Yiyit noted that Turkey entered the new wave of COVID-19 after vaccinating more than 85 percent of healthcare professionals and those aged 65 and over with the Sinovac vaccine.

The average age among the hospitalizations and fatalities across the country fell below 65, he added, highlighting the high number of infections among the unvaccinated group.

"This enhanced our fighting power and strengthened our hands, especially during the transition period of patients to intensive care," he said, noting that the younger group can nonetheless better fight the disease.

Guner Sonmez, a radiology doctor at Faculty of Medicine of the Istanbul-based Uskudar University, recently told local media that before the vaccinations, several healthcare workers were dying from the coronavirus each day.

"But after they were vaccinated, these deaths stopped," Sonmez was quoted as saying by the Milliyet daily.

The latest data revealed that the rate of healthcare workers among hospitalized COVID-19 patients decreased from 3.1 percent to 0.78 percent in the country, according to media reports.

Ankara-based Hacettepe University announced earlier that CoronaVac has an efficacy rate of 83.5 percent based on third phase trials in the country.

For Yiyit, more and more people in Turkey are demanding Sinovac's inactivated vaccine given their familiarity with these kinds of inactive jabs from their childhood.

"Our goal is to vaccinate all citizens over 18 years old this summer," Yiyit added. "If we can achieve this, we plan to be able to overcome the next peaks more comfortably."