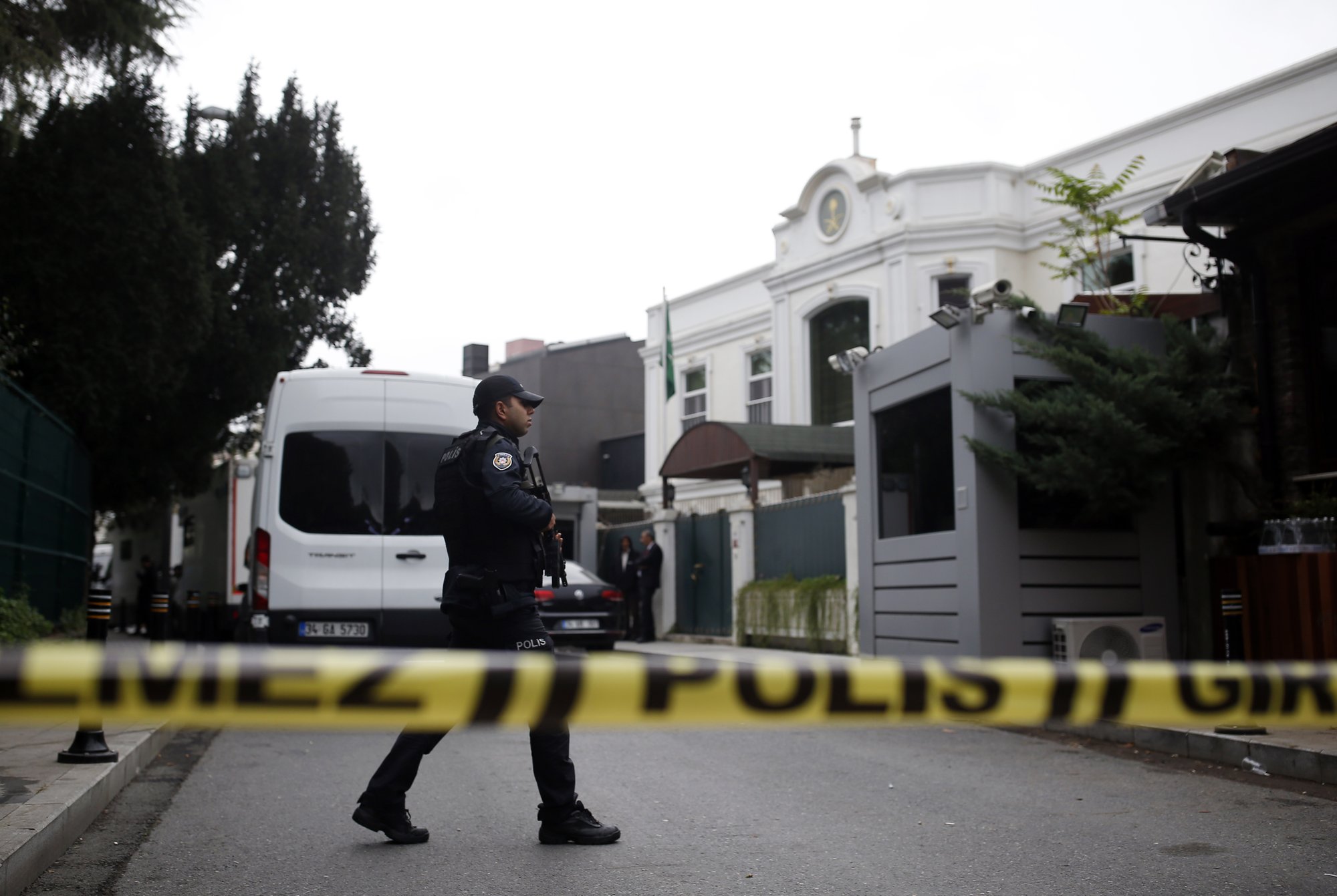 Turkish police outside the residence of the Saudi consul General Mohammed al-Otaibi to conduct a search after the disappearance and alleged slaying of writer Jamal Khashoggi, in Istanbul, Wednesday, Oct. 17, 2018. (Photo: AP/Emrah Gurel)

Turkish crime-scene investigators entered the residence of the Saudi consul general in Istanbul on Wednesday to search for evidence in the disappearance of Saudi writer Jamal Khashoggi, just as a pro-government newspaper published a gruesome recounting of his alleged slaying.

Saudi Arabia’s green national flag flapped overhead as forensics teams walked into the residence, only 2 kilometers (1.2 miles) from the consulate where Khashoggi vanished Oct. 2 while trying to pick up paperwork to get married. It was the second-such extraordinary search of land considered under international law to be Saudi sovereign soil after Turkish police searched the consulate through the early morning Tuesday.

The new search and newspaper report put further pressure on Saudi Arabia to explain what happened to Khashoggi after a visit by U.S. Secretary Mike Pompeo to both the kingdom and Turkey. Flying back home, Pompeo remained positive about an ongoing Saudi probe into Khashoggi’s disappearance, but stressed answers need to come soon.

“Sooner’s better than later for everyone,” Pompeo said.

The residence search came after a report by the newspaper Yeni Safak citing what it described as an audio recording of Khashoggi’s slaying. It described the 60-year-old Washington Post columnist as having his fingers cut off and being decapitated after entering the consulate.

The newspaper said Saudi Consul General Mohammed al-Otaibi could be heard on the tape, telling those allegedly torturing Khashoggi: “Do this outside; you’re going to get me in trouble.”

The newspaper said one of the Saudis replied: “Shut up if you want to live when you return to (Saudi) Arabia.”

Security services in Turkey have used pro-government media to leak details of Khashoggi’s case, adding to the pressure on the kingdom.

The three posed for photos, but said nothing together in front of reporters.

On a plane back home, Pompeo said Erdogan “made clear that the Saudis had cooperated with the investigation that the Turks are engaged in and they are going to share information.”

“If a country engages in activity that is unlawful it’s unacceptable,” Pompeo said. “No one is going to defend activity of that nature. We just need to simply say what happened.”

Pompeo met with Saudi King Salman and his son, the 33-year-old Crown Prince Mohammed bin Salman, on Tuesday. Before leaving Riyadh, Pompeo told reporters that the Saudi leaders “made no exceptions on who they would hold accountable.”

“They made a commitment to hold anyone connected to any wrongdoing that may be found accountable for that, whether they are a senior officer or official,” Pompeo said.

No major decisions are made outside of the ultraconservative kingdom’s ruling Al Saud family. Khashoggi had fled the country last year amid the rise of Prince Mohammed, whom he wrote critically about in the Post.

On Tuesday, a high-level Turkish official told the AP that police found “certain evidence” of Khashoggi’s slaying at the consulate, without elaborating. The official spoke on condition of anonymity because the investigation was ongoing.

President Donald Trump’s previous warnings over the case drew an angry response Sunday from Saudi Arabia and its state-linked media, including a suggestion that Riyadh could wield its oil production as a weapon. The U.S. president has been after King Salman and OPEC to boost production to drive down high oil prices, caused in part by the coming re-imposition of oil sanctions on Iran.

Prominent U.S. newspapers have reported, citing anonymous sources, that Saudi officials may soon acknowledge Khashoggi’s slaying at the consulate but blame it on a botched intelligence operation. That could, like Trump’s softening comments, seek to give the kingdom a way out of the global firestorm of criticism over Khashoggi’s fate.