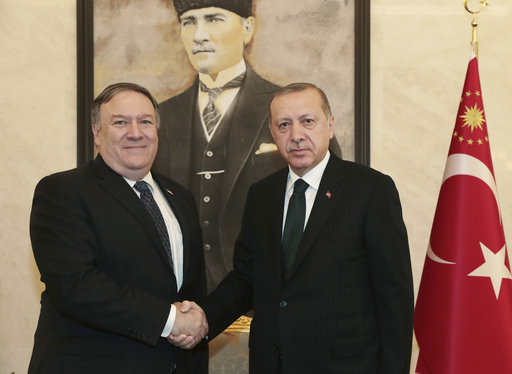 Erdogan received Pompeo at Ankara's Esenboga Airport in the morning, after the latter's prior visit to Saudi Arabia over the case of missing journalist Jamal Khashoggi, a Saudi Washington Post journalist who has been missing since he entered the Saudi consulate in Istanbul on Oct. 2.

Turkish Foreign Minister Mevlut Cavusoglu on Tuesday said Turkey may interrogate officials at the Saudi consulate in Istanbul if needed, underlining the importance of a transparent investigation.

During Pompeo's visit, top diplomats of both side would also discuss bilateral and regional issues including Syria, according to Turkish Foreign Ministry.

On Monday, Turkish investigation team conducted a nine-hour search in the Saudi consulate building in Istanbul, after Turkey and Saudi agreed to work together on the probe.