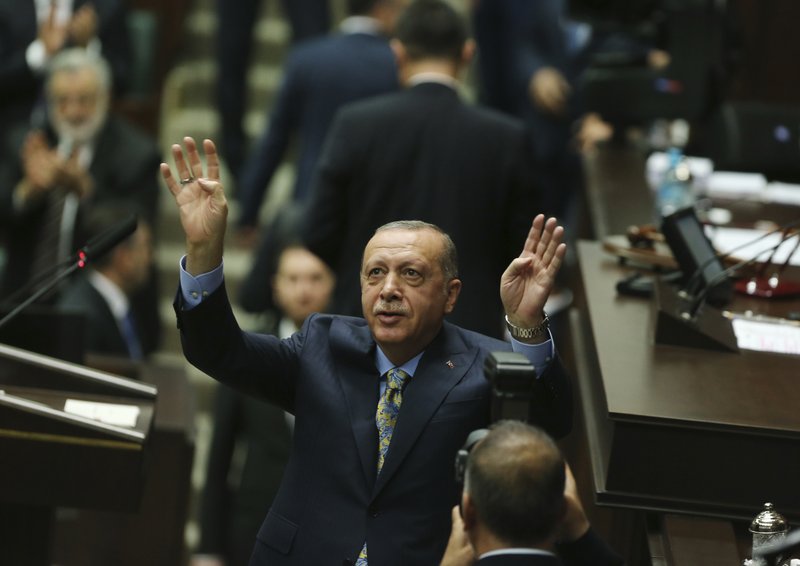 Turkish President Recep Tayyip Erdogan addressed parliament about the death of Saudi journalist Jamal Khashoggi. He urged Saudi Arabia to reveal who ordered this 'savage murder' and said the suspects should be tried in Turkey. (Photo: AP)

Saudi officials murdered journalist Jamal Khashoggi in their Istanbul consulate after plotting his death for days, Turkey’s president said Tuesday, contradicting Saudi Arabia’s explanation that the writer was accidentally killed. He demanded that the kingdom reveal the identities of all involved, regardless of rank.

President Recep Tayyip Erdogan also said he wants Saudi Arabia to allow 18 suspects that it detained for the Saudi’s killing to be tried in Turkish courts, setting up further complications with the Saudi government, which has said it is conducting its own investigation and will punish those involved. Saudi Arabia has described the suspects as rogue operators, even though officials linked to Saudi Arabia’s assertive Crown Prince Mohammed bin Salman have been implicated in the killing.

“To blame such an incident on a handful of security and intelligence members would not satisfy us or the international community,” Erdogan said in a speech to ruling party lawmakers in parliament.

“Saudi Arabia has taken an important step by admitting the murder. As of now we expect of them to openly bring to light those responsible — from the highest ranked to the lowest — and to bring them to justice,” said the Turkish president, who used the word “murder” 15 times in his speech.

CIA director Gina Haspel is in Turkey to review the case, according to a US official who was not authorized to discuss the trip and spoke only on condition of anonymity. US President Donald Trump has said he’s not satisfied with the explanations he’s heard from Saudi Arabia about the death of the Washington Post columnist and critic of the kingdom.

Erdogan’s speech was previously pitched as revealing the “naked truth” about Khashoggi’s slaying. Instead, much of what he said confirmed reports and leaks citing anonymous officials in the days since the journalist walked into the Saudi consulate in Istanbul.

Erdogan didn’t mention Prince Mohammed by name in his speech. However, he kept pressure on the kingdom with his demands for Turkish prosecution of the suspects as well as punishment for the plot’s masterminds.

“All evidence gathered shows that Jamal Khashoggi was the victim of a savage murder. To cover up such savagery would hurt the human conscience,” he said.

Erdogan said 15 Saudi officials arrived in the country shortly before Khashoggi’s death and that a man, apparently dressed in the writer’s clothes, acted as a possible decoy by walking out of the consulate on the day of the disappearance.

“Why did these 15 people all with links to the event gather in Istanbul on the day of the murder? We are seeking answers. Who did these people get their orders from to go there? We are seeking answers,” Erdogan said. “When the murder is so clear, why were so many inconsistent statements made? Why is the body of a person who has officially been accepted as killed still not around?”

International skepticism intensified after Saudi Arabia said on Saturday that Khashoggi died in a brawl. The case has shocked the world and raised suspicions that a Saudi hit squad planned the writer’s killing after he walked into the consulate on Oct. 2, and then attempted to cover it up.

At a Cabinet meeting Tuesday, King Salman again stressed that Saudi Arabia would hold those responsible for Khashoggi’s slaying “accountable,” according to the state-run Saudi Press Agency.

Before Erdogan’s announcement, top Turkish officials said Turkey would clarify exactly what happened to Khashoggi as pressure increased on Saudi Arabia, which is hosting a glitzy investment conference this week that many dignitaries have decided to skip because of the scandal.

“As we all know these are difficult days for us in the kingdom of Saudi Arabia,” Energy Minister Khalid Al-Falih told attendees seated in an ornate hall during the opening of the conference in Riyadh.

“Nobody in the kingdom can justify it or explain it. From the leadership on down, we’re very upset of what has happened,” Al-Falih said

Saudi Arabia said it arrested suspects and that several top intelligence officials were fired over Khashoggi’s killing, but critics alleged that the punishment was designed to absolve Prince Mohammed, the heir-apparent of the world’s top oil exporter, of any responsibility. Any major decision must be signed off by the highest powers within its ruling Al Saud family.

On Monday, leaked surveillance video showed a man strolling out of the diplomatic post hours after Khashoggi disappeared into the consulate, apparently wearing the columnist’s clothes as part of a macabre deception to sow confusion over his fate.

The new video broadcast by CNN, as well as a pro-government Turkish newspaper’s report that a member of Prince Mohammed’s entourage made four calls to the royal’s office from the consulate around the same time, put more pressure on the kingdom. Meanwhile, Turkish crime-scene investigators swarmed a garage Monday night in Istanbul where a Saudi consular vehicle had been parked.

Foreign Minister Adel al-Jubeir, in Indonesia, also pledged that mechanisms will be put in place so that “something like this can never happen again.”