ISTANBUL, Nov. 19 (Xinhua) - Turkish President Recep Tayyip Erdogan and his Russian counterpart Vladimir Putin on Monday joined a ceremony in Istanbul to mark the completion of the sea section of the TurkStream natural gas pipeline. 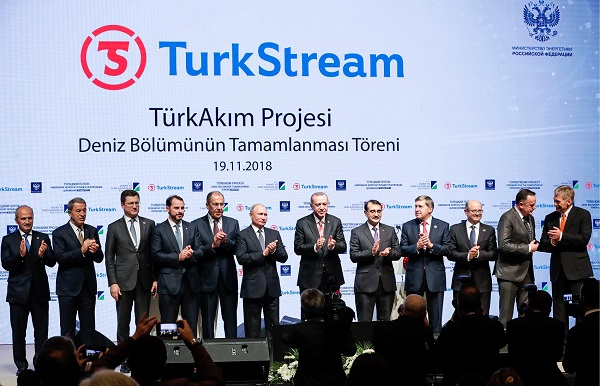 The pipeline, consisting of two separate lines with a length of 930 km each, enters the Black Sea near Anapa on the Russian coast and comes ashore in the Kiyikoy village in Kirklareli province of northwestern Turkey.

The gas transmission will take around 52 hours from Anapa to Kiyikoy, according to a press release.

"The TurkStream is a historical project in which we have spent a great effort together with our Russian friends," said Erdogan.

"Russia is a reliable partner for Turkey and an important natural gas provider that we can cooperate in the long run," he added, noting Turkey has bought 387 billion cubic meters of natural gas from Russia since 1987.

TurkStream is expected to carry a total of 31.5 billion cubic meters of Russian natural gas per year to Turkey and Europe, bypassing Ukraine. Russian state-owned energy giant Gazprom is planning to start the construction of the overland section of TurkStream in 2019.

"We plan to transfer at least half of the natural gas to Europe," Erdogan said, noting the entire project will be operational at the end of 2019.

For his part, Putin said the delivery of natural gas is not a simple process but requires high technology.

"It is also not possible to carry out such a project without political will and courage," the Russian leader stated, saying the project will make Turkey an important center of natural gas and enhance its position in the region.

The two presidents have started a closed-door meeting over regional issues.