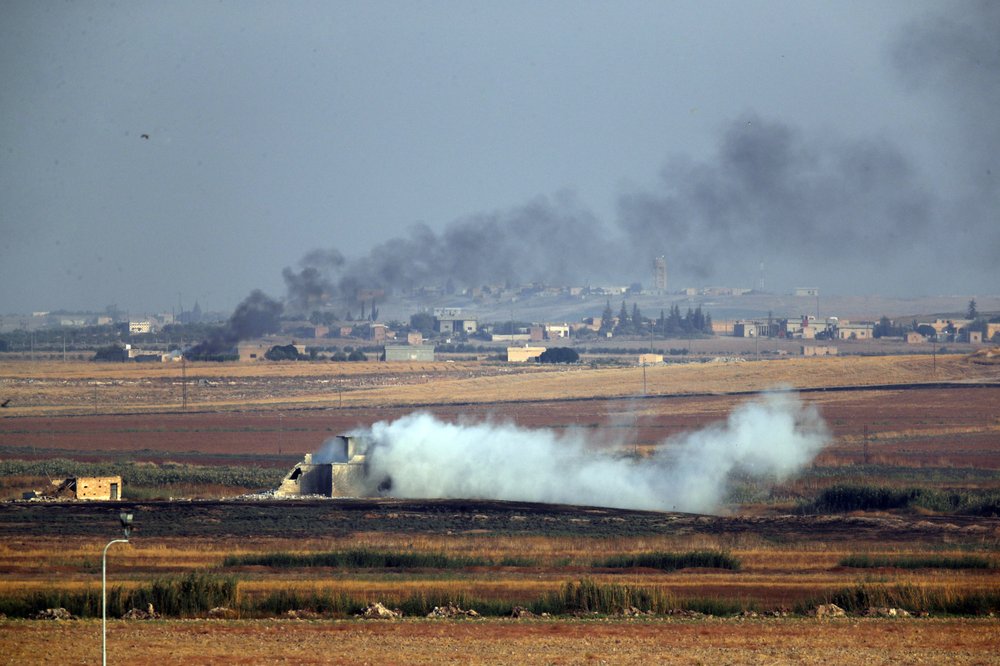 In this photo taken from the Turkish side of the border between Turkey and Syria, in Akcakale, Sanliurfa province, southeastern Turkey, smoke billows from targets inside Syria during bombardment by Turkish forces Wednesday, Oct. 9, 2019. (Photo: AP)

SANA said that three children and a woman were among the killed by Turkish artillery shelling on the city of Qamishli, and the towns of Ras al-Ayn, and al-Darbasiyah in the countryside of Hasakah, which is largely controlled by the Kurdish-led Syrian Democratic Forces (SDF) and its broader umbrella of the People's Protection Units (YPG).

This comes as the Turkish Defense Ministry announced on Wednesday evening the commencement of the ground incursion of areas controlled by the SDF in northern Syria, hours after starting its broader military assault with shelling and airstrikes.

The Turkish campaign started by shelling the positions of the SDF in Ras al-Ayn and later expanded to areas in Raqqa province in northern Syria.

Turkish President Recep Tayyip Erdogan said on Wednesday that his country has launched a military operation in northern Syria against the Kurdish forces that Ankara deems as terrorists and separatists.

Turkey launched the ground incursion operation with the help of the Turkey-backed rebels in northern Syria, which have recently joined force under the umbrella of the so-called "Syrian National Army."

The Syrian government slammed the Turkish military operation, saying that it runs counter to the international law of respecting the sovereignty of Syria.

Turkish officials have recently divulged Ankara's intention to unleash an assault against the Kurdish forces in northern Syria in order to eliminate the Kurdish forces, impose a safe zone near its southern border, and resettle millions of Syrian refugees.

Turkey sees the YPG and the SDF as separatists and terrorists, citing their links with the Kurdistan Workers' Party, which is listed as a terrorist organization by Turkey, the United States, and the European Union.

The US, which is backing the SDF, has withdrawn troops from the region where Turkey was planning to target.

The Turkish operation has drawn criticism from regional and international powers.