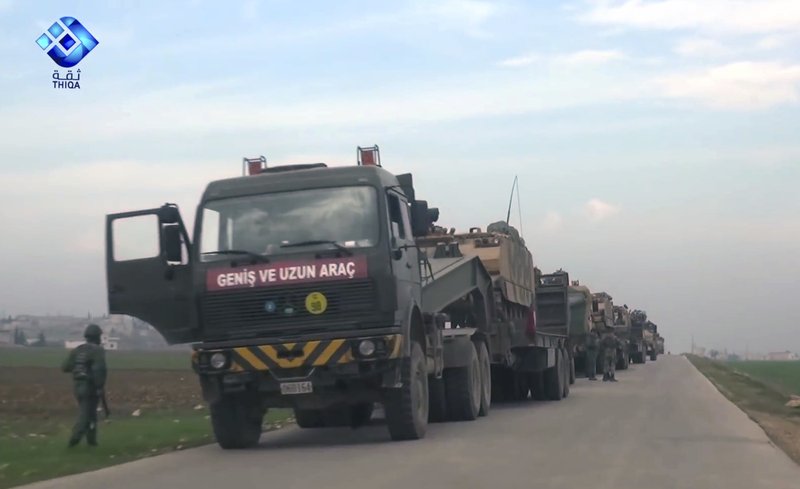 The Latest on developments in Syria (all times local):

Turkey’s military says a soldier has been killed in shelling in the Syrian Kurdish enclave of Afrin.

A military statement said the soldier died Monday in the Kuri Hill region.

At least 16 Turkish soldiers have been killed since Ankara launched an offensive last month aimed at driving Syrian Kurdish fighters out of the northern Syrian enclave along the border.

Turkey considers the Syrian Kurdish force to be an extension of the Kurdish insurgency in its own southeast.

Earlier Monday, a Turkish tank was hit by an anti-tank missile in the Kuchuk Darmik region, the military said. No one was wounded in that attack.

___5:40 p.m.Rebels under siege on the outskirts of Damascus are pounding the Syrian capital with rockets and mortar shells, a barrage that state media says has killed one person and wounded 13.

The SANA news agency said Monday that “armed groups” were firing into Damascus from the eastern Ghouta suburbs, one of the last remaining opposition-held pockets in the capital region.

Government forces pounded the suburbs with airstrikes on Monday. Syrian activists say at least 28 people have been killed.

The U.N. estimates 400,000 people are trapped under a government siege in eastern Ghouta. A top humanitarian official called the region the “epicenter of suffering” in Syria.

Turkey says it has detained 573 people for criticizing its offensive in northern Syria since the operation began earlier this month.

An Interior Ministry statement said Monday that 449 people have been detained so far for allegedly engaging in “terror propaganda” on social media, while a further 124 were detained for participating in protests against the military operation into the Syrian Kurdish-held enclave of Afrin.

Turkey launched its offensive on Jan. 20 to clear Afrin of Syrian Kurdish forces, whom Ankara views as terrorists because of their links to Kurdish insurgents in Turkey.

Turkish President Recep Tayyip Erdogan has accused opponents of the offensive of supporting terrorism, while authorities warned they would be prosecuted.

Those detained include several members of the Turkish Medical Association who warned against the operation’s human costs. Erdogan accused the group of being “terrorist lovers.”

RIA Novosti said mortar shells landed near the offices of the Syrian Orthodox Patriarchate of Antioch on Monday, killing two people inside and wounding three.

Russian volunteers were distributing aid collected by Russia’s Muslim and Christian communities outside the building and at another location.

The Russian Orthodox Church said none of its staff were hurt.

Turkey’s state-run news agency says a Turkish military convoy has been dispatched to establish an observation post in northwest Syria.

The Anadolu Agency says the convoy reached a rural area in the western countryside of the province of Aleppo to establish Turkey’s fourth post in Syria’s largest rebel stronghold.

Turkey began deploying forces in an observer role to northwestern Syria in October, as part of a “de-escalation” agreement with Iran and Russia to stabilize the lines of conflict in war-torn Syria.

The deployment comes amid heightened tensions between rebels and pro-government forces at their shared frontier, after the government retook a contested air base in January.

The Britain-based Syrian Observatory for Human Rights reported a convoy of dozens of armed vehicles crossed into rebel-held territory from Turkey early Monday.

A similar convoy was struck by a car bomb while transiting through rebel territory last Tuesday. It was not clear who was behind the attack, which killed a civilian who was part of the convoy.

Syrian activists say at least 23 civilians have been killed in intense government airstrikes on a rebel-held suburb near Damascus.

The Syrian Observatory for Human Rights says waves of airstrikes hit at least five neighborhoods in the Eastern Ghouta suburb, the only remaining rebel stronghold near the capital, Damascus.

The activist-run Ghouta Media Center also reported that 23 were killed. The Observatory says at least 70 have been wounded and that the number of casualties is likely to climb as rescuers operations are underway.

Among those killed was a rescue worker from the first-responders team known as White Helmets. The two groups say he died on duty in Arbeen, one of the neighborhoods hit by the airstrikes.

Syrian activists say two hospitals have been hit amid a wave of airstrikes on opposition-held areas in the northwest province of Idlib, the largest remaining rebel stronghold in Syria.

The bombardment comes after rebels shot down a Russian fighter jet on Saturday.

The activist-run Edlib Media Center and the Britain-based Syrian Observatory for Human Rights say one of the bombed hospitals was in the town of Kafranbel. They say it was hit on Monday morning.

Also, a spokesman for the Syrian American Medical Society says a hospitals it operates was struck three times on Sunday night.

The spokesman, Mohamad Katoub, says the hospital is in the town of Maaret al-Numan and is no longer operational.

A hospital supported by Doctors Without Borders was damaged in an airstrike last Tuesday.