Turkish, US military officials agree on plan for Syrian town 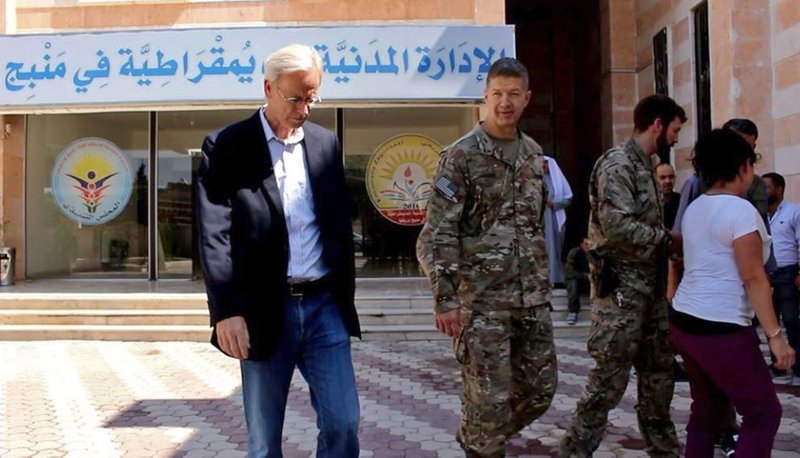 Turkey’s military said Thursday that Turkish and US officials meeting in Germany have reached an agreement on the Syrian town of Manbij, which has been a source of tension between the NATO allies.

A US-backed and Kurdish-led force captured Manbij from the Islamic State group in 2016. Turkey views the Kurdish fighters as terrorists because of their links to the Kurdish insurgency in southeastern Turkey, and has demanded they withdraw.

A military statement said Turkish and US military officials met at the US European Command headquarters in Stuttgart on Tuesday and Wednesday, and reached an agreement on a “Manbij Implementation Plan.” It said the plan would be discussed by senior officials from the two countries, but provided no details.

Turkey and the US have offered differing descriptions of their roadmap for Manbij, but the Kurdish forces are expected to retreat to the east of the Euphrates River, meeting a long-standing Turkish demand.

Turkey has repeatedly called on the US to stop backing the Syrian Kurdish People’s Protection Units, or YPG, which it sees as an extension of the Kurdistan Workers’ Party, or PKK. The PKK has waged an insurgency in Turkey for more than three decades.

The US-backed Syrian Democratic Forces, which are dominated by the YPG, played a key role in driving IS from much of northeastern Syria. Their advance prompted Turkey to intervene in 2016, sending troops and allied Syrian fighters into an area along the border.

An international human rights group said Turkey-backed Syrian opposition fighters have seized, looted and destroyed the property of Kurdish civilians in the northern Syrian region of Afrin, which was retaken from Kurdish fighters by force earlier this year.

Human Rights Watch said the Syrian forces have installed fighters and their families in residents’ homes and destroyed and looted civilian properties without compensating the owners.

Priyanka Motaparthy, acting emergencies director at Human Rights Watch, was quoted in the report as saying that “destroying or moving into the property of people who have had to flee the fighting is not what the Free Syrian Army fighters should be doing when they move into an area.”

HRW said Turkey and the Syrian fighters in Afrin should compensate displaced residents whose property they have seized, destroyed, or looted, and should not permanently deprive residents of their property.

Turkey launched an air and ground offensive in Afrin on Jan. 20, and captured most of it two months later.

In Geneva, meanwhile, UN Special Envoy for Syria Staffan de Mistura told reporters that a meeting will be held later this month among countries including the US, France, Saudi Arabia, Germany and Britain for the forming of a constitutional committee. He said the meeting will most likely be held on June 25.

The statement came a day after de Mistura said he will host senior officials from Iran, Russia and Turkey in Geneva next week to discuss efforts to create the constitutional committee, which could help one day bring peace to the war-devastated country.

De Mistura has recently focused his attention on the diplomatic track with the three powers to try to craft a way out of Syria’s seven-year war. The approach marks a departure from his months of repeatedly hosting delegations from the government and opposition groups for talks in Geneva that largely failed.