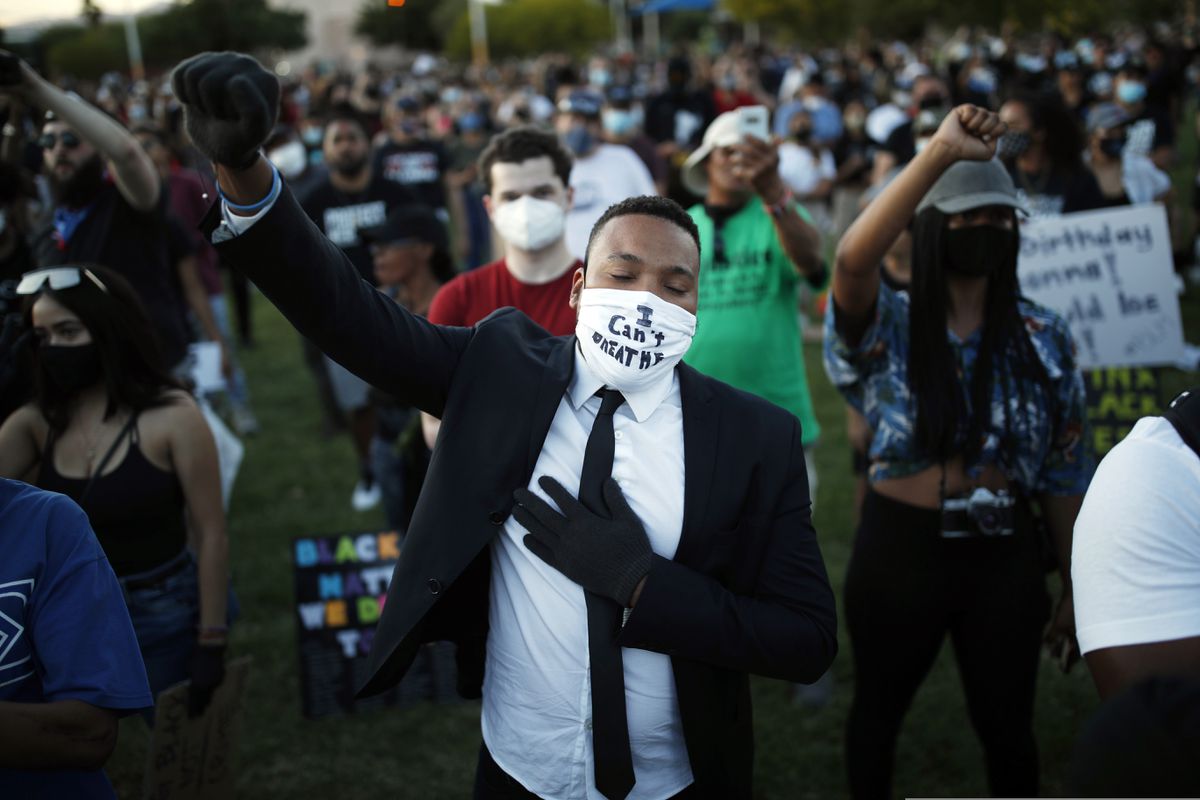 People raise their fists during a rally, Friday, June 5, 2020, in Las Vegas, against police brutality sparked by the death of George Floyd, a black man who died after being restrained by Minneapolis police officers on May 25. (File photo: AP)

Momentum for what many hope is a sustained movement aimed at tackling racial injustice and police reforms promised to grow Saturday as more protesters filled streets around the world and mourners prepared to gather in the U.S. for a second memorial service for George Floyd, who died a dozen days ago at the hands of police in Minneapolis.

Formal and impromptu memorials to Floyd over the last several days have stretched from Minneapolis to Paris, Rome and Johannesburg, South Africa. In North Carolina, where he was born, a public viewing and private service for family was planned Saturday. Services were scheduled to culminate in a private burial in the coming days in Texas, where he lived most of his life.

Floyd’s final journey was designed with intention, the Rev. Al Sharpton said. Having left Houston for Minneapolis in 2014 in search of a job and a new life, Floyd is retracing that path in death.

Sharpton has plans for a commemorative march on Washington in August on the anniversary of the day Martin Luther King Jr. gave his “I Have a Dream” speech in 1963. He said the event would be a way to engage voters ahead of November's general election and maintain momentum for a movement that has the power to “change the whole system of justice.”

“It’s going to be months, if not a year, before you even go to trial. So you can’t let this peter out," he told The Associated Press in a phone interview late Friday. "Otherwise you’ll end up in a year and people will go on to another story, and you will not have the public notice and pressure that you need.”

In Washington, authorities were preparing for what on Saturday was expected to be the largest demonstration against police brutality in the city so far. It comes as authorities have sought to reduce tensions by having National Guard troops not carry weapons.

While demonstrations in the U.S. have shifted to a calmer tenor, protesters stirred by Floyd's death are no less determined to turn an extraordinary outpouring of grief into change.

In Minneapolis, the city agreed to ban police chokeholds and require officers to intervene any time they see unauthorized force by another officer. The changes are part of a stipulation between the city and state officials who launched a civil rights investigation into Floyd’s death. The City Council was expected to approve the agreement, which will be enforceable in court.

Banning chokeholds is something Michigan activists want, too. They plan to lobby state lawmakers to take action, said Sam Riddle, political director of Michigan’s National Action Network, which has been organizing protests in and around Detroit.

'We get weary, but we are never worn out from seeking justice,” Riddle said in an email. “We will keep confronting systemic racism and injustice until perpetrators of the same change policies or we force them out and get policy changes that put people first."

Protests across the country had initially been marred by the setting of fires and smashing of windows, but Friday marked the third day of more subdued demonstrations.

In Washington, city workers and volunteers painted “Black Lives Matter” in enormous yellow letters on the street leading to the White House on Friday in a sign of local leaders’ embrace of the protest movement. The mural stretched across 16th Street for two blocks, ending just before the church where President Donald Trump staged a photo-op earlier this week after federal officers forcibly cleared a peaceful demonstration to make way for him.

Meanwhile, in a sign protesters’ voices were being heard, more symbols of slavery and the Confederacy came down. Mobile, Alabama, removed a statue of a Confederate naval officer after days of protests there, while Fredericksburg, Virginia, removed a 176-year-old slave auction block after several years of efforts by the NAACP.

Rashad Robinson, president of Color Of Change, said Floyd’s final words breathed new life into a movement that has been building for generations.

“These high awareness moments though have the ability move us forward or backwards as a nation,” Robinson said. "It’s up to us to channel the the energy of the moment into sustainable, collective pressure for justice. To that end, we are working to use the momentum we have gained to create lasting, systemic change that will keep us safe long-term.”

Organizers in Florida and Minneapolis were using sign-up sheets to collect the names of those who want to stay involved and were encouraging simple actions such as sending emails or making calls to local elected leaders to demand change.

“We are taking more of the strategy of: ‘How do we actually invest people’s energy beyond protesting?’” said Tifanny Burks, a community organizer in Florida. “We are thinking long term.”

Nakia Wallace, an organizer in Detroit, said people were beginning to understand the movement’s power.

“The world is watching,” she said, adding: “The main strategy is to get people to collectively come out and make demands until those demands are met.”

Joseph Rogers has been out marching in Richmond, Virginia, nearly every night for the past week. As a descendant of slaves, he said he's committed to a new racial justice movement that can spur change in his community and cities around the country. He said although the protests started as a reaction to the killing of Floyd, they are now about many more injustices.