Uganda's capital Kampala was rocked by two explosions on Tuesday that killed at least six people, including three suicide bombers, and injured 33 others. 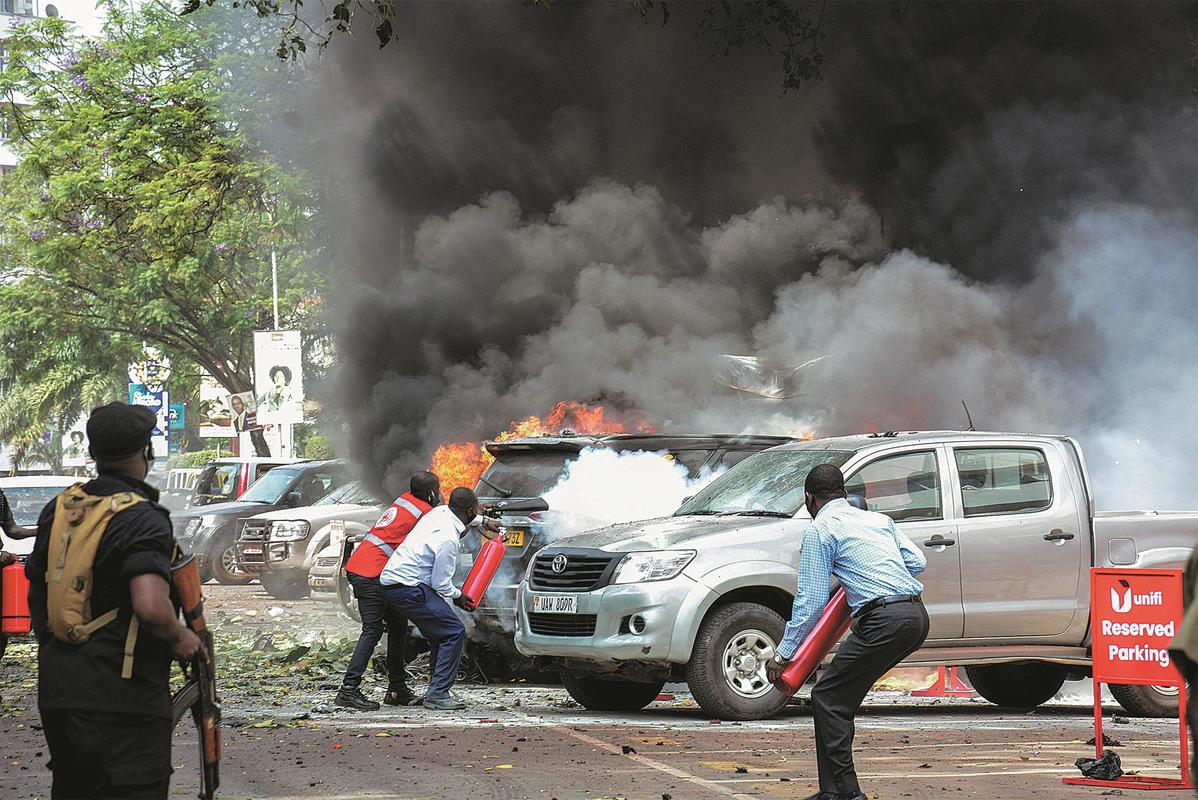 People rush to put out a fire engulfing vehicles after a bomb attack in Kampala on Tuesday. The blast, near the Ugandan parliament, was the second that day in the capital. IVAN KABUYE/AGENCE FRANCE-PRESSE

The attack, the latest in a spate of violence carried out by extremists in the country within a month, drew swift condemnation from the African Union.

The first bomb went off near a checkpoint at Uganda's Central Police Station. It was followed three minutes by a blast in the capital's Parliamentary Avenue.

"The AU stands in total solidarity with the people and government of Uganda following terrorist attacks in Kampala," Moussa Faki Mahamat, the chairperson of the African Union Commission, wrote on Twitter.

"Our sincere condolences to the families of the victims and wishes for a full recovery to the injured."

Police spokesperson Fred Enanga said footage from security cameras showed a man detonating a bomb in the first attack. He was carrying a backpack.

"He died instantly and the spillover effect caused additional injuries to police officers and other civilians who were within a radius of 30 meters," Enanga said.

After the second blast, two bombers blew themselves up when confronted.

Enanga said a fourth bomber was shot and injured; an improvised explosive device was found on him. A second such device was recovered from his home.

"We are pursuing other members of the terror groups," Enanga said.

He added: "We strongly condemn these senseless and heinous attacks within the city."

The police spokesman said the Allied Democratic Forces, an insurgent group operating in Uganda and the Democratic Republic of Congo, was responsible for the assaults that occurred days after a bomb attack on Oct 25 on a bus in central Uganda.

In a bloody month in the East African country, one person was killed and at least seven others wounded in a blast at a restaurant in a Kampala suburb on Oct 23.

"Many businesses unconsciously sell these items that are used to sell bombs, which calls for extra vigilance."

Enanga called on Ugandans to report suspicious activities, such as people buying large amounts of chemicals and other materials that can be used to make bombs.

He vowed that the police will pursue all terrorists to prevent extremism from again taking holding in the country.