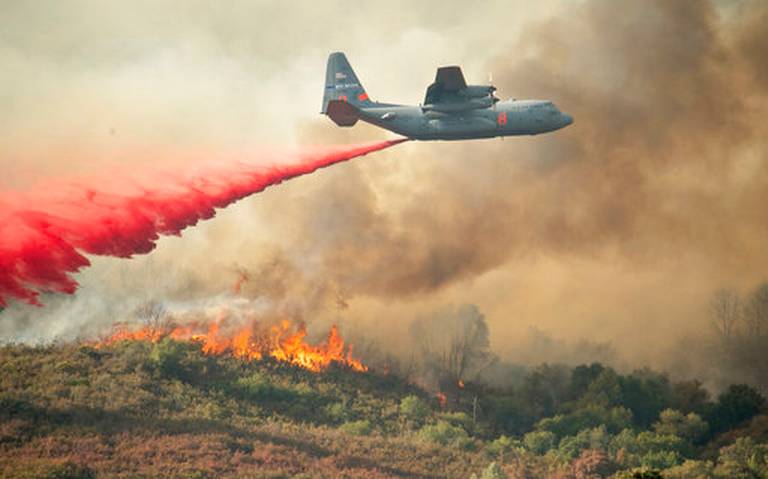 The fires burning a few miles apart and known as the Mendocino Complex ignited July 27 and encompass an area the size of Los Angeles. It's the second straight year that California has recorded the state's largest wildfire. 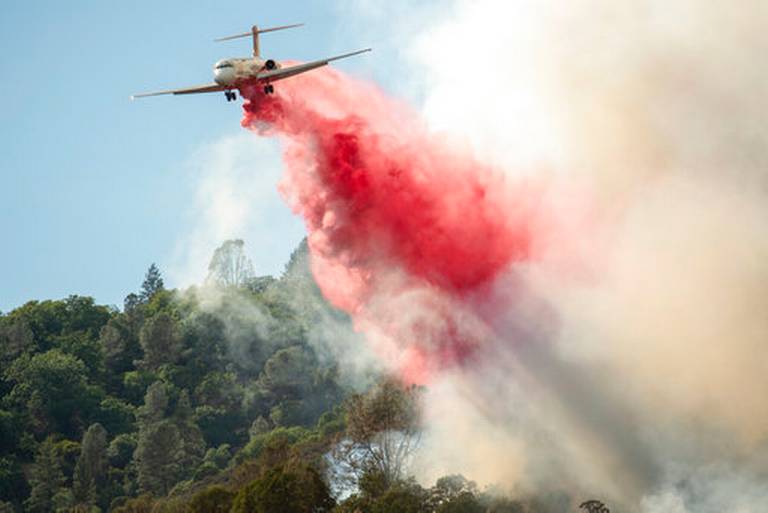 An air tanker drops fire retardant on a burning hillside in the Ranch Fire in Clearlake Oaks, Calif., Sunday, Aug. 5, 2018.

That surpasses a wildfire last year in Southern California that burned 281,893 acres (440.5 square miles or 1,140.8 kilometers). That one killed two people and destroyed more than 1,000 buildings.

The new fire has burned 75 homes. It is mostly burning in remote areas but has forced thousands of people to evacuate. 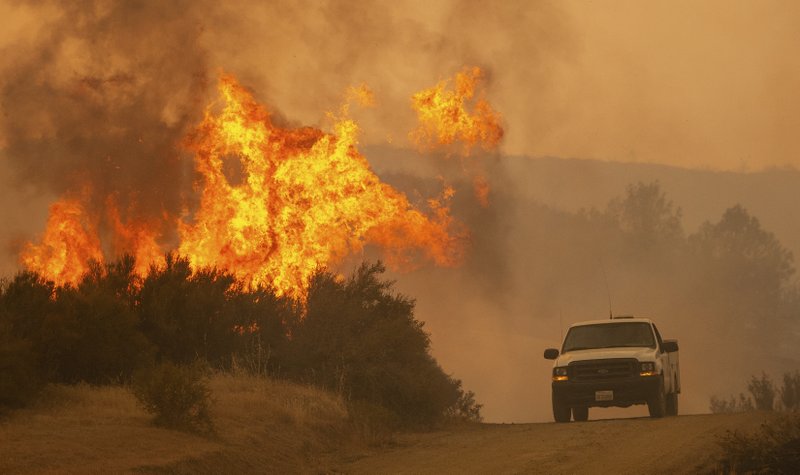 A truck passes flames Sunday at the Ranch Fire in Clearlake Oaks, Calif.

The blazes are likely to surpass the largest wildfire on record in the nation’s most populous state, which burned 440 square miles (1,140 square kilometers) in Southern California in December. It killed two people, including a firefighter, and destroyed more than 1,000 buildings before being fully contained on Jan. 12. 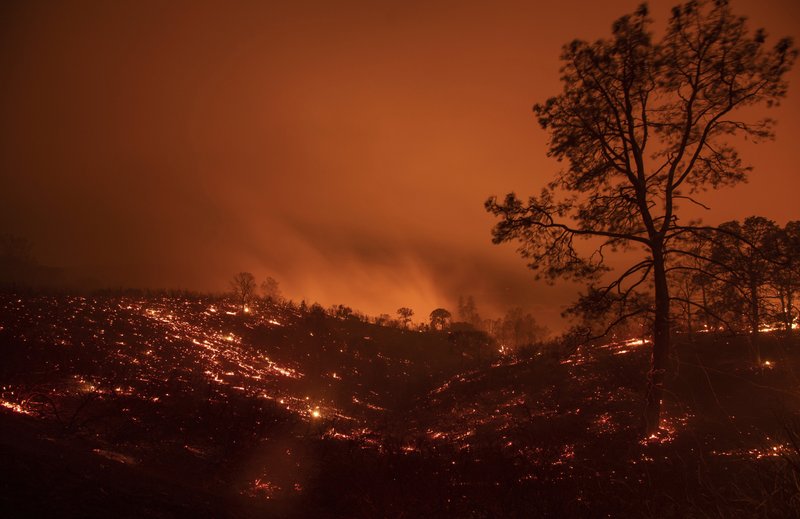 A hillside smolders after flames passed through during the Ranch Fire in Clearlake Oaks, Calif., on Sunday, Aug. 5, 2018. 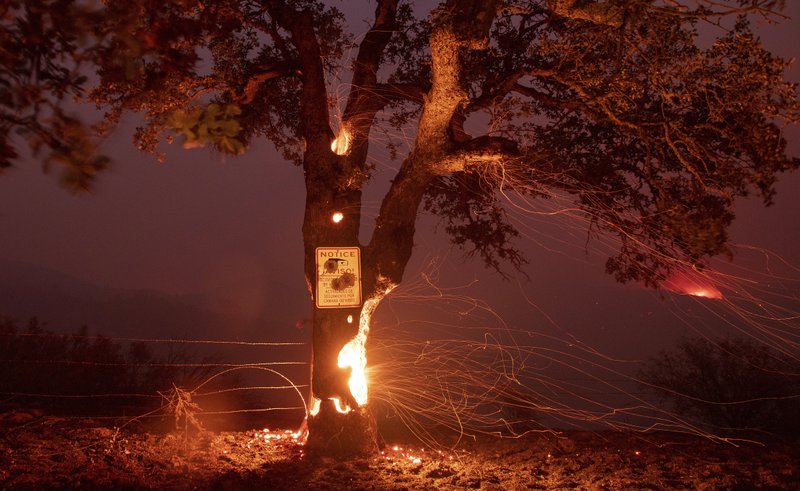 A tree burns from the inside during the Ranch Fire in Clearlake Oaks, Calif., on Sunday, Aug. 5, 2018. 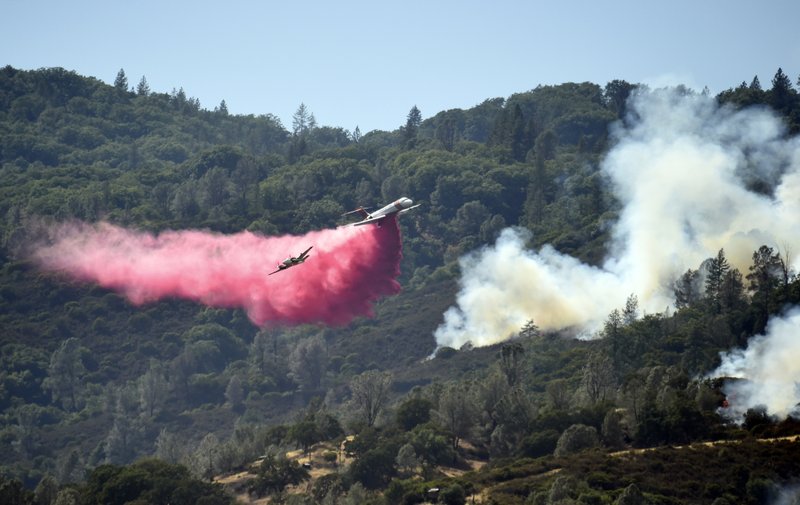 A spotter plane banks in front of an air tanker as it drops fire retardant on a burning hillside during the Ranch Fire in Clearlake Oaks, Calif., on Sunday, Aug. 5, 2018. 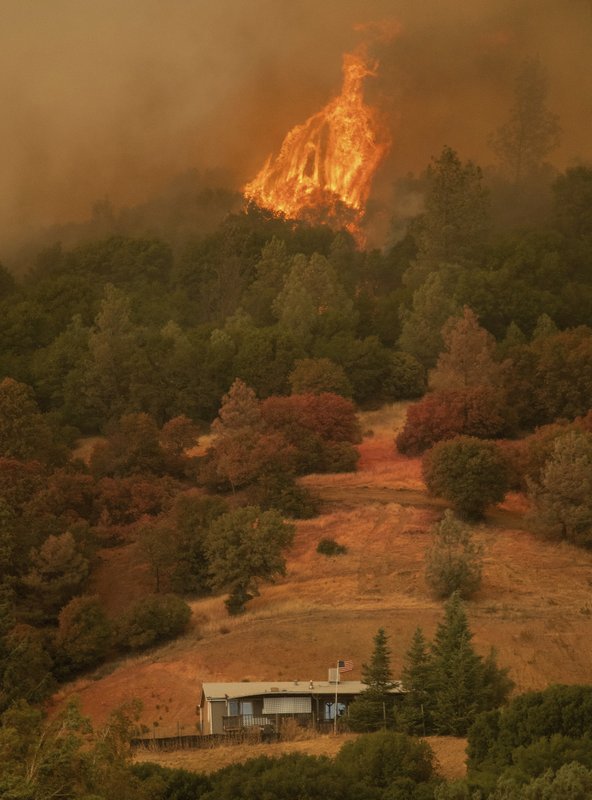 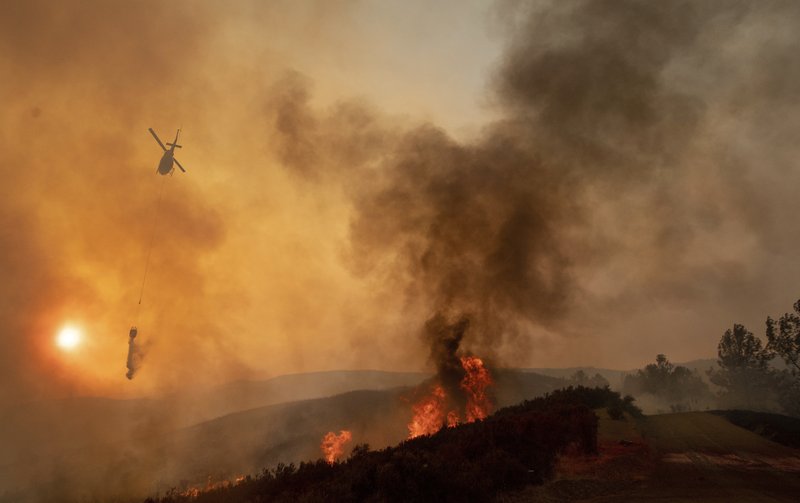 A helicopter drops water on a burning hillside during the Ranch Fire in Clearlake Oaks, Calif., Sunday, Aug. 5, 2018.

Hotter weather attributed to climate change is drying out vegetation, creating more intense fires that spread quickly from rural areas to city subdivisions, climate and fire experts say. But they also blame cities and towns that are expanding housing into previously undeveloped areas.

More than 14,000 firefighters are battling over a dozen major blazes throughout California, state Department of Forestry and Fire Protection spokesman Scott McLean said.

“I can remember a couple of years ago when we saw 10 to 12,000 firefighters in the states of California, Oregon and Washington and never the 14,000 we see now,” he said.

Crews did make progress over the weekend against one of the two blazes in the Mendocino Complex with help from water-dropping aircraft, Cal Fire operations chief Charlie Blankenheim said in a video on Facebook.

But the other one is growing after spreading into the Mendocino National Forest.

The complex of fires, which has burned 75 homes, has been less destructive to property than some of the other wildfires in the state because it is mostly raging in remote areas. But officials say the twin fires threaten 9,000 buildings and some new evacuations were ordered over the weekend as the flames spread.

Farther north, crews gained ground against a deadly blaze that has destroyed more than 1,000 homes in and around Redding. It was nearly halfway contained, Cal Fire said.

The wildfire about 225 miles (360 kilometers) north of San Francisco started more than two weeks ago by sparks from the steel wheel of a towed-trailer’s flat tire. It killed two firefighters and four residents and displaced more than 38,000 people.

Officials began allowing some residents to return to their neighborhoods. But tens of thousands of others were still evacuated.

The fires in Northern California have created such a haze of smoke in the Central Valley that Sacramento County health officials advised residents to avoid outdoor activities for the entire week.

Another blaze that erupted last week has damaged a historic Northern California resort in the Stanislaus National Forest. The nearly century-old Dardanelle Resort has sustained massive structural damage, though the details were unclear, the Sacramento Bee newspaper reported.

The rustic lodge 180 miles (290 kilometers) east of San Francisco is nestled in the Sierra Nevada mountains and offers cabin and motel rentals along with RV sites, a store and restaurant.

The US Forest Service reported that the fire crossed a highway Sunday evening, forcing crews to retreat from the fire’s edge.

The resort owners said in a Facebook post that “at this point it has been confirmed that there is ‘massive structural damage.’ We are heartbroken and struggling with this news.”

Cover image: A plume of smoke from a wildfire burning near the Holy Jim area looms in the distance Monday, Aug. 6, 2018, in Lake Forest, Calif. Authorities have evacuated cabins in two communities in the Santa Ana Mountains in Orange County because of a fast-moving wildfire.