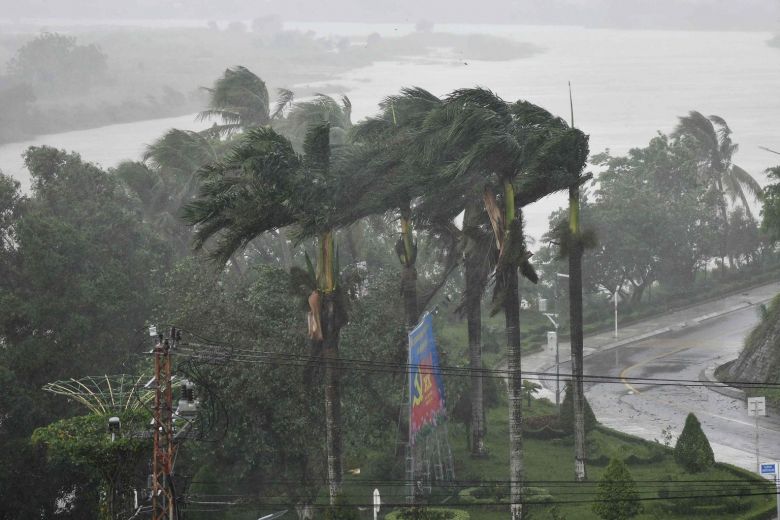 Two people were reported killed and 26 others missing as Typhoon Molave hit central Vietnam Wednesday, knocking down trees and tearing roofs off homes in some of the worst destruction seen in years.

Authorities relocated around 375,000 people to safety, cancelled hundreds of flights and closed schools and beaches ahead of the typhoon, which made landfall south of Danang packing winds of up to 145 kilometres per hour (85 miles per hour).

State media said at least two people were killed in Quang Ngai province while trying to protect their homes from the storm.

"The people of Vietnam are tough, yet this is among the worst destruction ever seen in many areas," said Vietnam Red Cross Society president Nguyen Thi Xuan Thu.

"The relentless storms and flooding are taking a devastating human toll, further destroying livelihoods and isolating millions of people."

Officials were also searching for 26 missing fishermen, with the storm -- Vietnam's fourth this month -- bringing waves up to six metres high as power was cut off across the region.

Navy and surveillance vessels were deployed to look for the crew members after their two boats disappeared after they attempted to dock, Deputy Prime Minister Trinh Dinh Dung said.

A fishing ban has been in place since Tuesday, while all airports in the area were closed until further notice.

The typhoon comes on the back of weeks of severe flooding and landslides that have claimed 130 lives and damaged or destroyed more than 310,000 homes, according to the International Federation of Red Cross and Red Crescent Societies (IFRC).

Close to 1.2 million people were in "severe danger" and in need of relief, the IFRC warned.

"These relentless storms are yet another example of the devastating impact of climate change," Red Cross spokesman Christopher Rassi said.

Vietnam is prone to natural disasters in the rainy season between June and November, with central coastal provinces commonly impacted, but the storms have notably worsened in recent years.