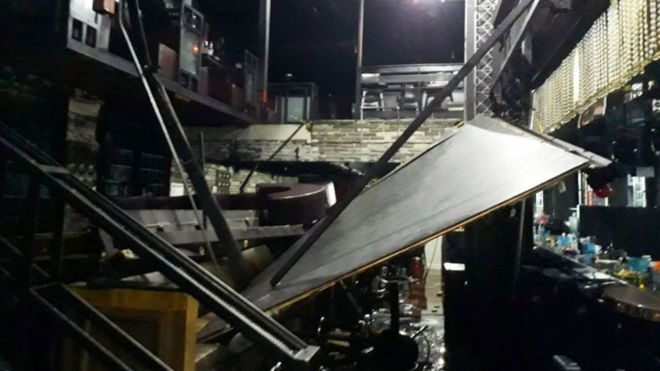 Two people died and many more were injured, including two American athletes at the world swim championships, after a balcony collapsed in a South Korean nightclub, local police said Saturday.

"An internal balcony collapsed at a club in Gwangju, killing two and injuring many, though the number of those injured could increase," said Song Gi-ju, a detective with the Gwangju Metropolitan Police Agency.

"An autopsy is planned for the two tomorrow. The two, who are locals, are not related to the swimming competition. Among the injured, two are athletes -- one an American diver, male -- and the other an American polo player, female."

A 38-year-old and a 27-year-old were rushed to hospital in grave condition after the inside balcony gave away at around 2:30am Saturday, but both died from their injuries, according to local media, reporting that at least 10 people sustained injuries in the accident.

"This is an awful tragedy," said Christopher Ramsey, CEO of USA Water Polo.

"Players from our men's and women's teams were celebrating the women's world championship victory when the collapse occurred at a public club.

"Our hearts go out to the victims of the crash and their families."

Ramsey added that all the American water polo players were "safe".

Pictures showed the mangled wreckage of the balcony that collapsed under the weight of party-goers and dropped around five metres (16 feet).