A knife-wielding attacker killed a 12-year-old schoolgirl and another man before stabbing himself to death in a rampage outside Tokyo Tuesday that also injured more than a dozen including several children. 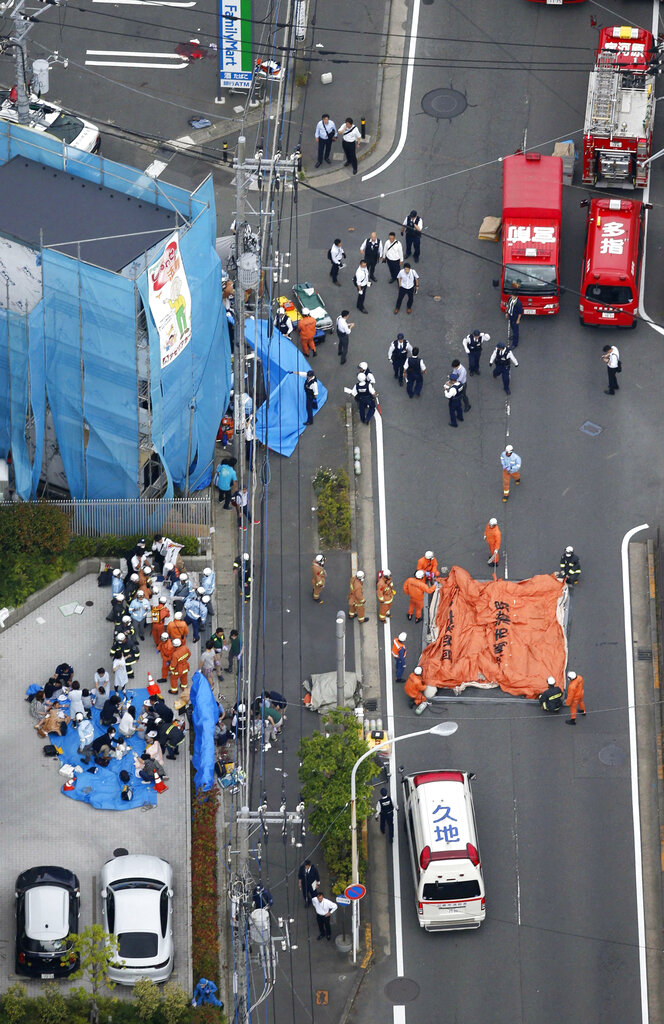 This aerial photo shows the scene of an attack in Kawasaki, near Tokyo Tuesday, May 28, 2019. (Photo: AP)

The mass stabbing in the town of Kawasaki, south of the Japanese capital, was a rare attack in a country with one of the lowest rates of violent crime in the developed world, and there was no immediate detail on the suspect's motive.

Kiyoshi Matsuda, deputy director of the Nippon Medical School Musashi Kosugi Hospital, told reporters that the 12-year-old schoolgirl and a 39-year-old man had succumbed to their injuries.

Local media reported that the suspected attacker, a man in his 50s, had also died of his wounds after turning the knife on himself. Emergency services said at least 16 others had been injured in the attack.

According to the Asahi Shimbun daily, a 57-year-old man nearby heard children scream and saw a middle-aged man clasping a knife near the bus stop, shouting "I will kill you".

A local man who identified himself as Matsumoto, 25, said he heard the screams just after he woke up and went outside.

"It's hard to describe what it was like, how it sounded. It wasn't girls having fun, it was a sound that was absolutely not normal," he told AFP.

"I saw a man lying on the street. I also saw a girl hunched over on the ground. There were also five or six girls, maybe they were the ones who screamed... There was blood all over them."

The attack occurred during the busy early morning commute as workers headed to their offices and children to school. Fire department officials said they received the first emergency calls shortly before 8:00 am local time (2300 GMT Monday).

The scene of the attack was still swarming with emergency personnel hours later, with three police vans parked around the spot to block it from view.

Emergency workers had also set up an orange medical tent to treat the wounded, and ambulances and fire engines were parked nearby.

A white school bus with blue stripes could be seen parked, however, with the name "Caritas Gakuen (school)" written on the side, said an AFP correspondent at the scene.

The bloodshed came as Donald Trump wrapped up a state visit to Japan, and the US president offered his "prayers and sympathy" to the victims as he met troops outside Tokyo.

Standing aboard a Japanese military ship, he said that "all Americans stand with the people of Japan and grieve for the victims and for their families".

A local resident, who declined to give his name, said children attending the Caritas school lined up for the bus at the site every day.

"If you live in this neighbourhood, everybody knows that these kids are there," the 66-year-old told AFP.

"I've been in this area for a long time, I cannot believe that somebody targeted this bus and targeted these small children."

An official at the St Marianna University School of Medicine told reporters that a "woman in her forties and three girls... suffered serious injuries."

"They will go through surgery for the injuries, mainly to their heads and necks. After that, they will be transferred to the ICU," said Takehito Otsubo, the hospital's assistant director.

Police earlier told AFP one suspect had been detained and an eyewitness told local media that the man had stabbed himself.

"I saw a man holding a knife... I couldn't see clearly, but he apparently stabbed himself in the neck," one eyewitness told NHK.

The broadcaster said two knives were spotted at the scene, but there was no immediate confirmation from officials.

"It is a very harrowing incident," government spokesman Yoshihide Suga told reporters, referring all further questions on the attack to police.

Violent crime is extremely rare in Japan, and children often travel to and from schools alone, but there have been a few high-profile attacks.

In 2018, a man was arrested in central Japan after stabbing one person to death and injuring two others aboard a bullet train, an attack that prompted new security measures on the famed rail service.

And in 2016, a man stabbed 19 people to death in a disability centre south of Tokyo in what he described as a mission to rid the world of people with mental illness.