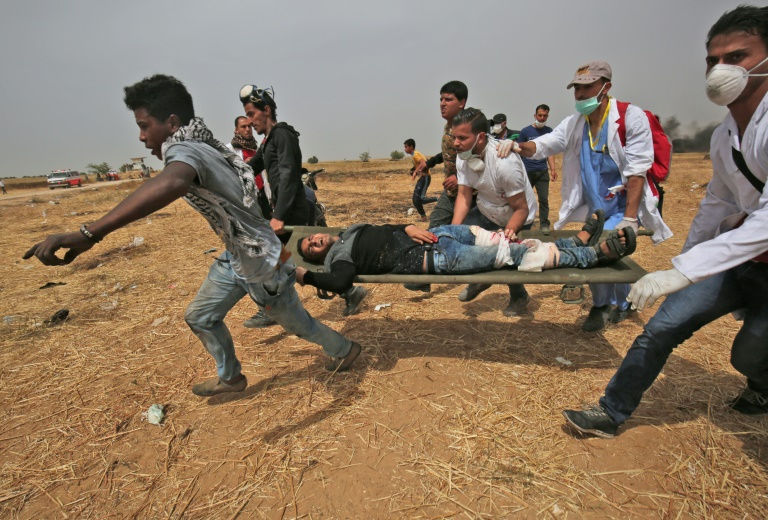 A wounded Palestinian protester is evacuated near the border fence with Israel in the southern Gaza Strip on April 20, 2018.(Photo: AFP)

Thousands protested along the Gaza Strip's border with Israel in a fourth straight Friday of mass demonstrations and clashes, with two Palestinians shot dead by Israeli forces.

Gazans also flew dozens of kites near the border fence, in some cases carrying Molotov cocktails and one with a swastika painted on it, in a new tactic that sparked at least two small fires in Israeli territory this week.

The latest deaths brought to 36 the toll of those killed by Israeli forces since March 30, with hundreds of others also wounded by gunfire, according to Gaza's health ministry.

More than 120 protesters were injured by various means on Friday, the ministry said.

Israel says it has only opened fire when necessary to guard its border and prevent violence, but no Israelis have been wounded and its open-fire rules have come under scrutiny.

With the protests seen by Israel as posing a challenge to its security forces, military aircraft dropped leaflets in the border area early Friday warning against approaching the fence.

Referring to the Islamist movement that runs the Gaza Strip, the leaflet said: "You are participating in violent riots. The Hamas terror organisation is taking advantage of you in order to carry out terror attacks."

It added: "Stay away from the fence and do not attempt to harm it; avoid using weapons and committing violent acts against Israeli security forces and Israeli citizens."

The number of protesters on Friday was lower than the previous three weeks, but still in the thousands.

Both Palestinians killed were shot east of Jabaliya in the north of the Gaza Strip, the health ministry said.

Among the thousands gathered to protest, at least hundreds were approaching the fence and throwing stones and burning tyres, an AFP correspondent said.

Israel's military said some 3,000 Palestinians were involved in "riots, attempting to approach the security infrastructures, burning tyres adjacent to it and attempting to fly kites with burning items attached".

"Several kites crossed into Israel and were extinguished when required."

It said in the statement that "troops are responding with riot dispersal means and are firing in accordance with the rules of engagement."

Defence Minister Avigdor Lieberman said while touring the Israeli side of the border on Friday: "The thing that the other side must understand is that there is a determined and skilled army here."

He added that "behind it stands a determined people that is backing up the army."

Tens of thousands have gathered on previous Fridays as part of the protests near the border. The protests are meant to last six weeks, but peak on Fridays.

A smaller number have approached the fence and thrown stones or rolled burning tyres toward Israeli soldiers on the other side.

Israel says firebombs and explosive devices have also been used.

Israel has pledged to stop damage to the fence, infiltrations and attacks, and alleges there have been attempts at all three.

It accuses Hamas, with whom it has fought three wars since 2008, of using the protests as cover to carry out violence.

Palestinians say protesters are being shot while posing no threat to soldiers.

The European Union and UN chief Antonio Guterres have called for an independent investigation into the deaths, but Israel has rejected it.

The protests are calling for Palestinian refugees to be allowed to return to their former lands now inside Israel.

More than 700,000 Palestinians were expelled or fled during the 1948 war surrounding the creation of Israel.

Protest organisers officially labelled the latest protest in support of "martyrs and prisoners," but on social media some Palestinians dubbed it the "Friday of Kites."

Gazans pinned notes to some of the kites telling Israelis "there is no place for you in Palestine."