A train carrying South Korean engineers and officials crossed into the North on Friday to begin a landmark joint survey to reconnect railway tracks between the two Koreas. 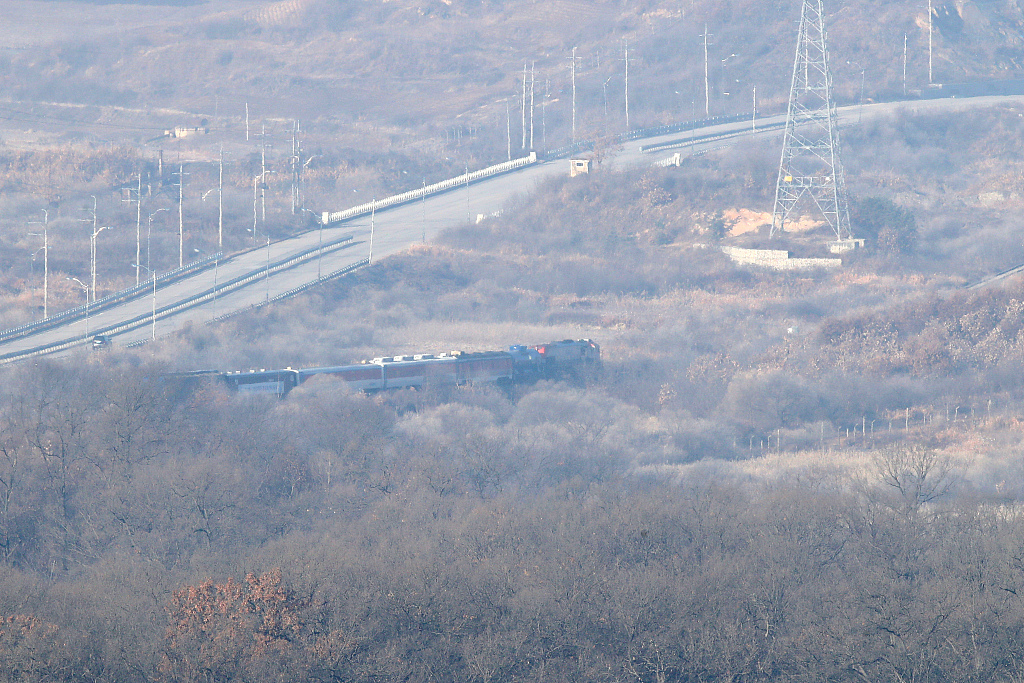 Linking up the railway systems was one of the agreements made earlier this year in a key meeting between North Korean leader Kim Jong Un and the South's President Moon Jae-in.

It marked the first time in a decade that a train from the South entered North Korea.

TV footage on Friday showed a red, white and blue train -- displaying a banner reading "Iron Horse is now running toward the era of peace and prosperity" -- pull away from the South's Dorasan station, the nearest terminal from the western part of the inter-Korean border.

"This signals the start of co-prosperity of the North and the South by reconnecting railways," Transport Minister Kim Hyun-mee said.

She added the railway reconnection would help expand the country's "economic territory" to Eurasia by land, as the division of the Korean peninsula has left South Korea geopolitically cut off from the continent for many decades.

The six-carriage train is transporting 28 South Koreans including railway engineers and other personnel, and carrying 55 tonnes of fuel and an electricity generator.

There is a passenger coach, a sleeping coach, an office coach and a wagon loaded with water for showers and laundry.

When it arrives at Panmun Station -- the first North Korean terminal across the border -- the six carriages will be linked up to a North Korean train, and the South Korean locomotive will return home.

The South Koreans and their counterparts will live in the train, inspecting two railway lines for a total of 18 days -- one linking the North's southernmost Kaesong City to Sinuiju City near the Chinese border, and the other connecting Mount Kumgang near the inter-Korean border to Tumen River bordering Russia in the east.

They will travel some 2,600 kilometres (1,600 miles) on railway tracks together, the transport ministry said.

Before the division of the Korean peninsula in 1948, there were two railway lines linking the North to the South -- one in the west and the other in the east.

As a gesture towards reconciliation, the two Koreas reconnected the western line in 2007 and limited numbers of freight trains transported materials and goods to and from the Seoul-invested Kaesong industrial zone in the North for about a year.

But the line has since then been put out of service due to heightened tension over the North's nuclear development programme.

The current railway project has also faced delays over concerns it could violate UN sanctions imposed on the North over its nuclear and missile programmes.

But the UN Security Council granted an exemption for the joint study last week, although it is unclear whether others will be given as the project progresses.

Seoul said the survey was purely aimed at gathering information on the current state of the North's rail system and assured that actual restoration works would come only after consents from the UN.

The South's Unification Ministry has earmarked some 63.4 billion won ($56.6 million) for next year on the assumption that it will take five years to repair and improve the two railway routes in the North.

The North's railway tracks are in such disrepair that trains reportedly operate between 20-45 km per hour.

The study comes as differences emerge between Seoul and Washington, which stations 28,500 troops in the South as part of their decades-old alliance.

The South's dovish President Moon has long favoured engagement with the nuclear-armed North and has dangled large investment and joint cross-border projects as incentives for steps towards denuclearisation.