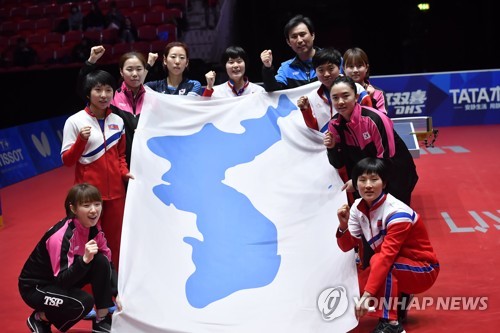 In this EPA photo from May 4, 2018, members of the unified Korean women's table tennis team hold up the Korean Unification Flag after losing to Japan in the semifinals of the World Team Table Tennis Championships at Halmstad Arena in Halmstad, Sweden. (Yonhap)

The two Koreas will form joint table tennis teams for the 2018 Korea Open next week, a report said Sunday, the latest sign of thawing ties between the neighbours.

The two countries will field joint teams in the men's and women's doubles as well as the mixed doubles in the tournament to be held in the South's city of Daejeon from Tuesday to Sunday, Yonhap news agency said.

It cited an unnamed official at the Korea Table Tennis Association.

If confirmed, it will be the third time that table tennis players from the two Koreas form a joint team following the 1991 world championships in Japan and this year's championships in Sweden.

The Korea Table Tennis Association could not be immediately reached for comment.