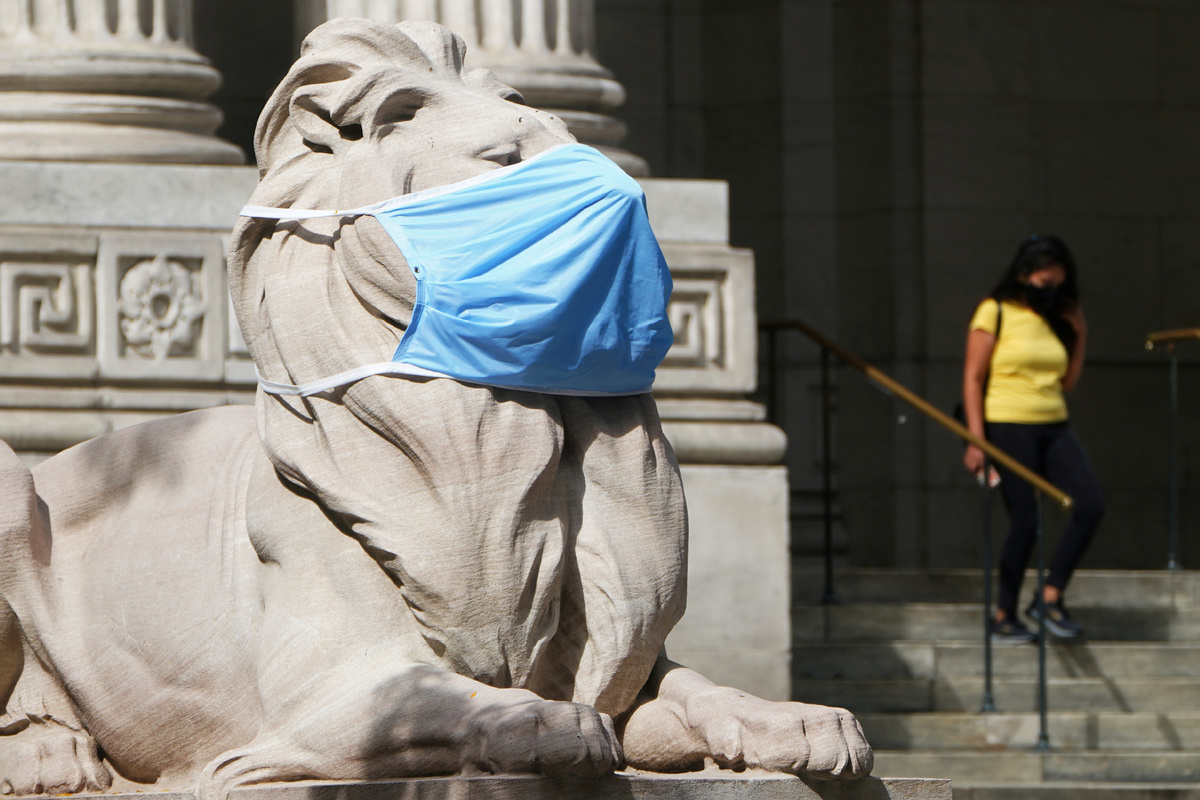 A lion statue that sits outside the New York Public Library building wears a mask in the Manhattan borough of New York City, New York, US, September 28, 2020. (Photo: Agencies)

New York City has recorded its highest increase in novel coronavirus cases since June, as the outbreak sweeps through neighborhoods outside of Manhattan, especially in Brooklyn and Queens, prompting concern among health officials who had worked hard to get the virus under control.

The outbreaks have occurred in locations where the positivity rate has ranged from 1.78 percent to 6.75 percent.

The Department of Health said cases are growing at an alarming rate in at least eight neighborhoods in Brooklyn and Queens, outpacing the citywide average by 3.3 times over the past two weeks. There were 1,000 new infections on Friday alone.

Brooklyn is a major contributor in the rising number of cases statewide, Governor Andrew Cuomo said Monday. Orange and Rockland counties, north of the city, also are areas of concern, he said.

Queens and Brooklyn have large Orthodox Jewish communities, and they have accounted for 25 percent of the state's new daily cases while representing 2.9 percent of New York's population. Hospitalizations for confirmed coronavirus cases have gone up mainly in both areas.

In the Williamsburg section of Brooklyn, health officials are observing a faster increase in cases compared with other parts of the city, even though the test positivity rate is at 1.84 percent.

"We have specific ZIP codes in Brooklyn that we are going to look at because it's very targeted,'' Cuomo said Monday. "The key with these clusters is to jump on them quickly, attack them from all sides."

He said 200 rapid-testing machines would be made available immediately to those areas.

"The public schools, private schools that are in those ZIP codes, I strongly encourage to request a rapid-testing machine and have them start testing their students," he said.

New York City was once the epicenter of the virus, with as many as 800 deaths a day earlier this year. But amid a stringent mask-wearing mandate by the governor, along with social distancing measures and widespread testing, the virus was bought under control.

The rate of hospitalizations and cases fell dramatically over summer. But amid the progress, the governor had warned about the possibility of a second wave of the virus as the city reopened further.

The city's public schools are set to reopen with in-person learning this week. New York City has the largest public school district in the country, with 1.1 million students.

The city Health Department said the schools could stay open only if the coronavirus positivity rate stays below 3 percent. Cuomo has repeatedly warned that the start of indoor dining in restaurants next month at 25 percent capacity could lead to a new wave of infections.

Nationwide, more than 7.1 million people have been infected with the novel coronavirus, and more than 204,000 have died, according to Johns Hopkins University.