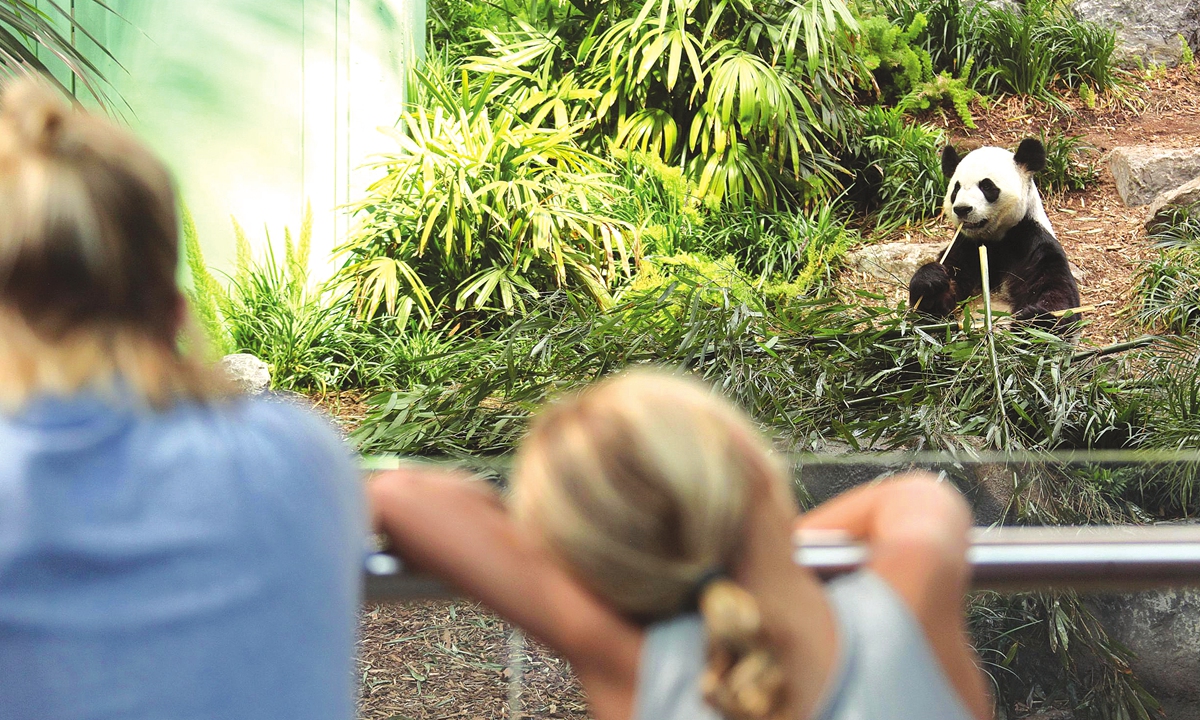 Visitors watch a giant panda in the Calgary Zoo in Canada. Photo: VCG

The Chengdu Research Base of Giant Panda Breeding told the Global Times on Monday that they are actively working to bring two giant pandas in the Calgary Zoo in Canada back home as they are facing a food shortage.

The Calgary Zoo confirmed in an email that the two giant pandas are facing a food shortage due to the coronavirus outbreak.

"The single supplier we have been using in British Columbia will run out of fresh bamboo in late September," an employee at the Calgary Zoo told the Global Times on Sunday, adding that the zoo was "deeply concerned" for the pandas' welfare since it has not yet been able to attain the travel permits necessary to ship them back due to import laws that have changed due to COVID-19.

Zhang Zhihe, head of the research base in Chengdu, told the Xinhua News Agency in May that the base has been working on the return of the pandas, including handling transportation procedures to ensure the safety of the pandas in transit and preparing food for them for when they arrive home.

"Don't worry about it at all, they'll get the best care when they come back," Zhang said.

The situation has lead to concerns about the health of the two pandas. The two pandas, Er Shun, a female, and Da Mao, a male, require 40 kilograms of fresh bamboo daily.

Prior to the pandemic, the zoo relied on fresh bamboo imported from China to feed the two pandas.

Diao Kunpeng, a panda expert and director of Beijing Qingye Ecology, told the Global Times that there are ways to solve the current food supply problem, but they would be costly.

"To ensure the supply of fresh bamboo, the zoo could use preservation technology but the cost is very high. It also can look for bamboo from other regions where air travel to Canada is open," Diao said.

Chinese panda experts said that pandas are picky about the types of bamboo they will eat as well as its level of freshness. They can eat more than 50 kinds of bamboo, but prefer scattered bamboo to tufted bamboo.

The Canadian zoo employee told the Global Times that once the pandas are returned to Chengdu, they will not come back to Canada. The pandas were originally scheduled to be sent back in 2023, according to a report by China Central Television (CCTV).

Though COVID-19 testing is compulsory for travelers and some animals entering China, testing will not be needed for the pandas.

"There is no research that suggests giant pandas are vulnerable to COVID-19 the way other animals are," the Calgary Zoo said.

"They don't need to take a test when they return to China."

Diao also confirmed that there is no evidence that giant pandas are vulnerable to coronavirus, but added that "carrying out nucleic acid tests on these two pandas and isolating them for a while after they come back will be safer. All pandas at the Chengdu panda base have undergone nucleic acid testing."

Back in May, the Calgary Zoo urged the Canadian and Chinese governments to expedite the necessary permits to allow the pandas return to China, sparking public concern.

The two pandas arrived in Canada in 2013 and gave birth to two cubs at the Toronto Zoo.