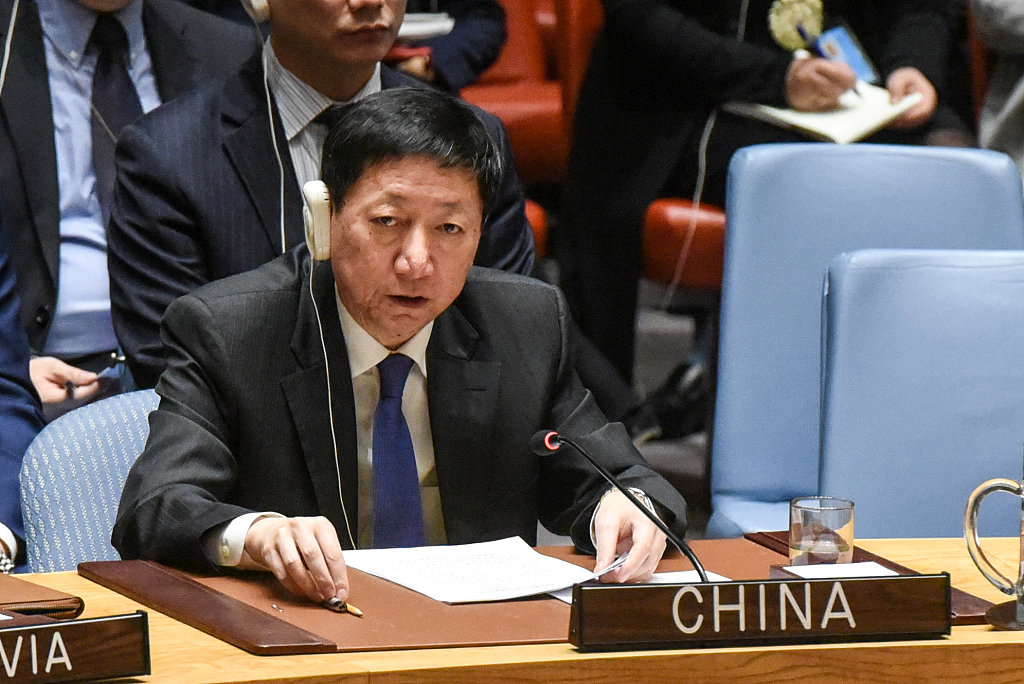 UNITED NATIONS, March 26 (Xinhua) -- A Chinese UN envoy said Tuesday China wishes to stress once again that a two-state solution is the fundamental solution to resolve the Palestinian-Israeli conflict, and any new initiative should contribute to the realization of the two-state solution.

At present, the international consensus on taking forward the Middle East peace process is faced with challenges, while the efforts to facilitate Palestinian-Israeli peace talks have shown no sign of progress, said Wu Haitao, China's deputy permanent representative to the United Nations.

In the meantime, the conflict and confrontation in the Gaza Strip is escalating, and the construction of settlements in the West Bank has continued, said the Chinese envoy, adding that the incendiary rhetoric and violent acts of the parties concerned have been frequent.

"The development of the situation is extremely worrying," he said.

"We call on the Israelis and Palestinians to keep in mind the big picture of regional security, peace and stability, maintain calm and exercise restraint, move in the same direction, halt military actions, and effectively facilitate the ease of tension," he said.

The Security Council and other stakeholders that have influence on the Middle East must remain united, and work hard to create necessary conditions for the stabilization of the Palestinian-Israeli situation and the resumption of dialogue, he added.

The question of Palestine is at the core of the Middle East issue that bears on the long-term stability and development of the region, said Wu, noting China's insistence on a two-state solution as the fundamental solution to the Palestinian-Israeli conflict.

The international community needs to build on the relevant UN resolutions, the principle of "land for peace," and the Arab Peace Initiative, and scale up efforts to facilitate the resumption of talks to achieve a comprehensive, just and lasting solution to the Palestinian issue, he said.

Wu said that any new initiative should contribute to the realization of the two-state solutions, and Security Council resolution 2334 should be effectively implemented.

The final status of Jerusalem is complex and sensitive, with the settlement of the Palestinian issue having an important bearing on regional peace and tranquility, he said.

Wu said that recent conflict in the Al-Aqsa mosque is worrying. "All parties should act with caution and uphold a principle of respecting diverse history, upholding fairness and justice, implementing international consensus, and achieving peaceful coexistence," he said.

Regarding Golan Heights, Wu said that it is internationally recognized as an occupied territory, and the UN Security Council has adopted several resolutions calling on the withdrawal of Israel from there.

"China opposes any unilateral action to alter the facts and does not wish to see further escalation of regional tension," he said.

US President Donald Trump on Monday signed a proclamation recognizing the Israeli sovereignty over Syria's Golan Heights which Israel occupied in 1967 and annexed in 1981.

Five UN Security Council members from the European Union -- Belgium, Britain, France, Germany, and Poland -- issued a joint statement on Tuesday morning, saying that they do not recognize Israel's sovereignty over the occupied Golan Heights.

"Annexation of territory by force is prohibited under international law. Any declaration of a unilateral border change goes against the foundation of the rules-based international order and the UN Charter," said the statement.