TOKYO, Sept. 9 (Xinhua) -- Typhoon Faxai made landfall near Tokyo early Monday morning causing major disruption to transportation networks with train services being suspended and flights being halted as the capital and surrounded areas were lashed by torrential rain and battered by gusty winds. 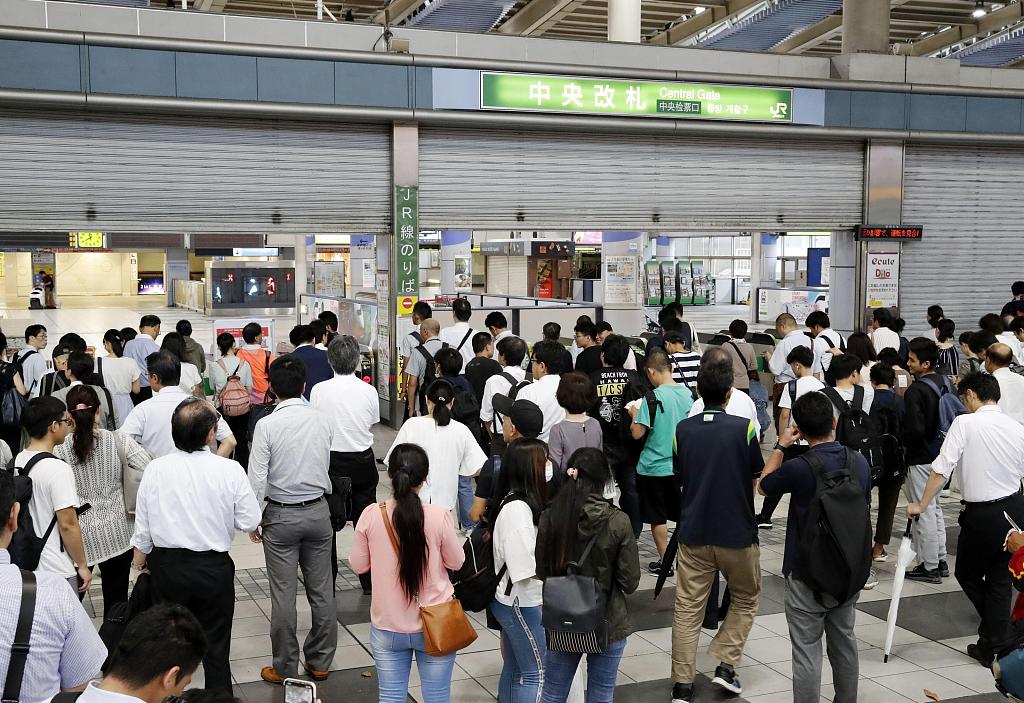 People wait at ticket gates in Shinagawa Station on Sept. 9, 2019, in the wake of Typhoon Faxai that landed near Tokyo, prompting East Japan Railway Co. to suspend all lines in the Tokyo metropolitan area. (Photo: VCG)

According to Japan's Meteorological Agency (JMA), Typhoon Faxai made landfall near Chiba City, east of Tokyo, at around 5:00 a.m. on Monday (2000 GMT Sunday), prompting East Japan Railway Co. to suspend all lines in the greater Tokyo area.

East Japan Railway Co. said it hopes to resume its services by 10:00 a.m. (0100 GMT) local time, though hundreds of thousands of Monday morning commuters have already been affected.

Central Japan Railway Co. resumed its bullet train services at around 7:40 a.m. (2240 GMT Sunday) after debris was removed from tracks. Preempting the severity of the storm, the operator had reduced its services between Tokyo and Shin-Osaka a day earlier.

Around 138 flights to and from Tokyo area airports on Monday were cancelled, including 49 Japan Airlines flights and 41 operated by All Nippon Airways, the carriers said. The other cancellations were made by smaller, budget carriers.

Local authorities have said that a number of people have been injured as a result of the powerful typhoon, with more than a dozen people hurt in Tateyama, Chiba Prefecture, and surrounding areas and 10 people injured in Chiba City. Two people were also hurt in neighboring Kanagawa Prefecture.

The JMA said Faxai, the season's 15th typhoon, was traveling in northeasterly trajectory at 25 km per hour near the city of Narita.

Its atmospheric pressure was 960 hectopascals at its center and winds of up to 216 kph have been clocked, the weather agency said, adding that it will likely pass through the Kanto region in eastern Japan and mover over the Pacific Ocean off northeastern Japan.

More than 440 mm of rainfall was logged in the city of Izu in Shizuoka Prefecture, with 109.0 mm falling in a one hour period early this morning.

As the typhoon moves northeast to the Tohoku region, the JMA said it forecasts 150 mm of rainfall In the 24 hours through 6:00 a.m. local time on Tuesday (2100 GMT Monday).