TOKYO, Oct. 10 (Xinhua) -- A powerful typhoon expected to hit Japan this weekend is likely to cause major disruption to transportation networks in eastern and western Japan, with a number of flights and trains services likely to be cancelled or suspended, their operators said Thursday. 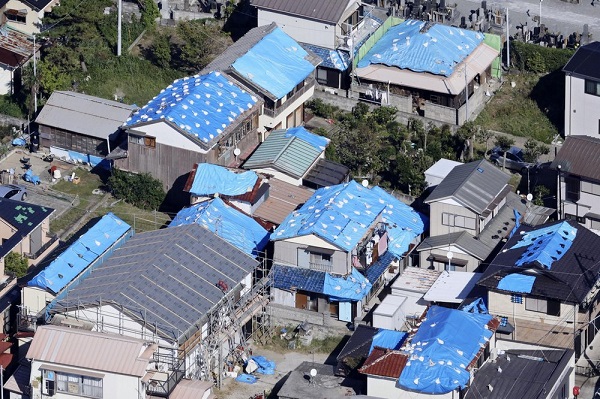 This Oct. 9, 2019, photo shows the sheet-covered roofs of the houses damaged by typhoon Faxai in Kyonan, near Tokyo. (Photo: AP)

With the weather agency here saying it expects Typhoon Hagibis, the 19th typhoon of the season, to make landfall over the weekend, Shinkansen bullet train services in eastern and northeastern Japan may be suspended on Saturday and Sunday, East Japan Railway Co. said.

Central Japan Railway Co., meanwhile, said its services between Tokyo and Shin-Osaka stations may be halted.

Many railway companies in Tokyo have also said they may halt or reduce their services over the weekend and will announce more details of amended schedules on Friday.

With the expected arrival of Hagibis, which along with strong gusts and torrential downpours, is forecast to cause wave surges in Pacific coastal regions over the weekend, domestic flights will also likely be disrupted.

All Nippon Airways has said that all its domestic flights using Tokyo's Haneda and Narita airports will be cancelled on Saturday, with at least 370 flights being affected, while Japan Airlines has suspended six flights over the weekend between Haneda, Osaka, and Chubu.

Japan Airlines has indicated, however, that many more flights out of Haneda, Narita, and Chubu airports may be cancelled.

According to the Japan Meteorological Agency (JMA), Hagibis is currently moving in a north-northwesterly direction and is situated around 390 kilometers southwest of Chichijima Island, the largest of the Pacific Ogasawara Islands.

The typhoon, the expected arrival of which has already led to the Rugby World Cup currently underway in Japan to, in an unprecedented move, cancel some of its games, is packing winds of up to 270 kph and, with an atmospheric pressure of 915 hectopascals at its center, is moving at a speed of 20 km per hour.

People living along the typhoon's expected path have been warned by the JMA to prepare for "extreme" weather conditions.