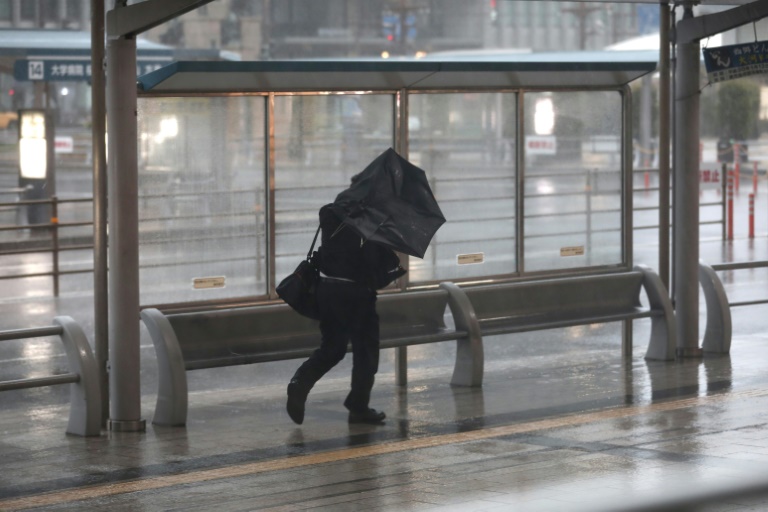 The Japanese weather agency has warned of record winds

The storm made landfall at Tanabe city, south of the western city of Osaka, around 8pm (1100 GMT), according to Japan's Meteorological Agency.

Trami, with maximum gusts of 216 kilometres (134 miles) per hour, was expected to pass over most of the archipelago, weakening slightly but causing extreme weather into Monday, forecasters said.

In total, 75 people have sustained minor injuries -- mainly cuts from shattered glass -- and one woman was reported missing in the Miyazaki region, which was drenched by record rainfall and suffered localised flooding.

According to local media, the woman in her 60s was swept away by gusts in a gutter while working with her husband in their ricefield.

Nationwide, authorities have issued non-compulsory evacuation advisories to 1.5 million residents, according to public broadcaster NHK, and officials urged people across the country to stay indoors.

Nearly 500,000 households in the western region of Kyushu and Okinawa have lost power, local utilities said.

Violent gusts and heavy rain made it impossible to venture outside, said Yuji Ueno, an official in the town of Shirahama in Wakayama prefecture near Tanabe city.

"From around 2pm, we saw incredible winds and rain. I stepped outside the city hall in the afternoon, and the rain was swirling in very strong wind. Enormous wind."

"It was difficult to stay standing. It was very scary," Ueno told AFP.

As the typhoon barrelled east, rail authorities took the highly unusual step of cancelling evening train services in Tokyo, one of the world's busiest networks, urging passengers to shelter indoors when the storm hits.

The typhoon is not expected to hit the capital head-on but strong winds and heavy rain are still feared from late Sunday. Some businesses were already putting up shutters and hunkering down.

Trami is the latest in a string of extreme natural events in Japan, which has suffered typhoons, flooding, earthquakes and heatwaves in recent months, claiming scores of lives and causing extensive damage.

Classed as a "strong" typhoon, Trami pounded Kagoshima on the western tip of Japan early Sunday, causing minor injuries -- such as cuts from broken windows and people knocked over by gusts. 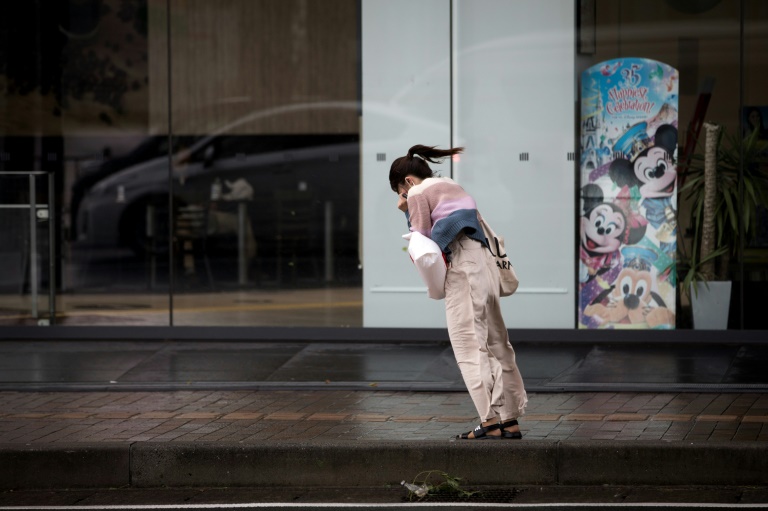 People struggled to stay upright in the wind

Osaka lay close to the path of the storm and its Kansai Airport, which is situated on reclaimed land offshore and suffered extensive damage in a storm earlier in September, closed two runways.

Officials piled up sandbags to avoid a repeat of flooding seen during the previous storm.

Speaking to AFP from a hotel near the airport, British businessman Richard Swart said: "It's actually quite warm outside, very windy and with very heavy rain."

"The airport is closed. There are very few people around and all the shops are shut. It's really deserted," added Swart, 56, from Durham in northern England.

Even from the safety of the hotel, he said he could hear the wind "howling" outside.

The Japanese meteorological agency warned the typhoon would bring strong winds and downpours, which could trigger landslides and floods as well as lightning strikes and tornados across the nation.

Cities in the expected path of the typhoon were already taking precautions.

East Japan Railway stopped all train services in and around Tokyo at 8pm, shortly before the typhoon was to draw near the Japanese capital.

Some western regions are still recovering from Typhoon Jebi in early September, the most powerful typhoon to strike the country in a quarter of a century. It claimed 11 lives and shut down Kansai Airport.

Deadly record rainfall hit western Japan earlier this year and the country sweltered through one of the hottest summers on record.

Also in September a magnitude-6.6 earthquake rocked the northern island of Hokkaido, sparking landslides and leaving more than 40 people dead.