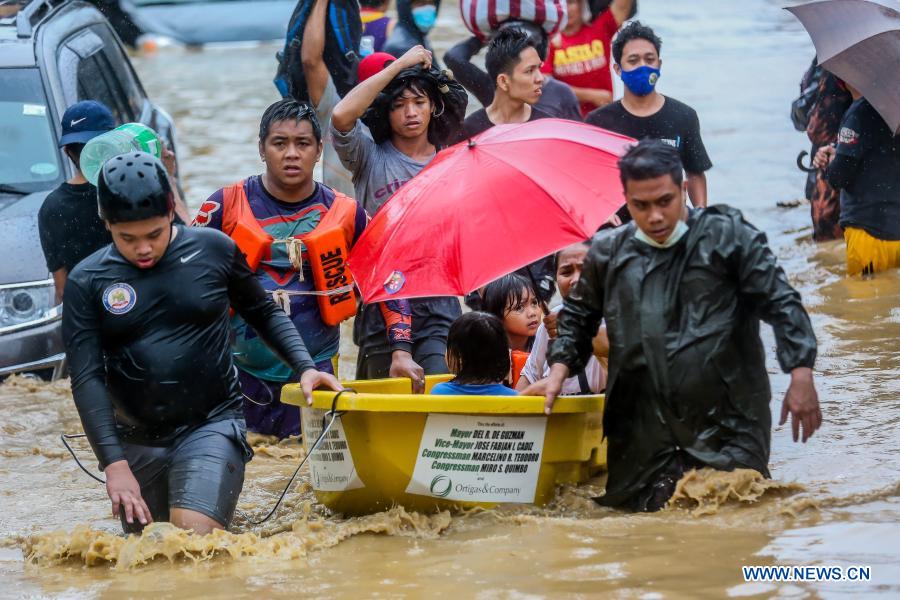 Rescuers of the Philippine National Police (PNP) evacuate residents from the flood brought by typhoon Vamco in Manila, the Philippines, on Nov. 12, 2020. (Photo: Xinhua)

The Philippine National Police said 43 were injured and 20 were still missing from the typhoon that tore through the country from Wednesday to Thursday.

Typhoon Vamco, the 21st cyclone to hit the country this year, made landfall on Wednesday night. It unleashed fierce winds and intense rains, triggering flash floods that left thousands of homes in the capital of Manila and other regions submerged.

It struck while the Philippines is still reeling from the onslaught of Typhoon Goni, the most powerful typhoon in the world this year, which lashed the country early this month.

Among the casualties, five people died and six others went missing in a landslide in Banaue town in Ifugao province in the northern Philippines on Thursday.

The Department of Public Works and Highways (DPWH) in the Cordillera Administrative Region said the victims were on their way to inspect a rescue operation in Viewpoint, a village in Banaue when the landslide hit at around 5 p.m. local time on Thursday.

The DPWH said the landslide occurred "amid the torrential rains and massive destruction" brought by the typhoon.

Rescuers dug up the bodies of the five victims on Friday. Among the victims were two engineers overseeing a road project in the area, the DPWH added.