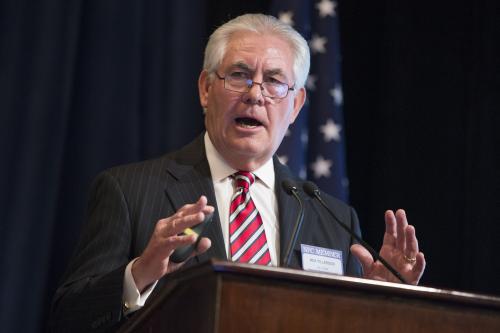 U.S. Secretary of State Rex Tillerson asked Russia to ease violence in eastern Ukraine over a phone call with Russian Foreign Minister Sergei Lavrov on Tuesday, the U.S. State Department said on Wednesday.
During their phone talk, Tillerson underscored the U.S. concern with the rising violence in eastern Ukraine and asked Russia to lessen the violence, said U.S. State Department Spokesperson Heather Nauert in a statement.
Disputes over the eastern Ukraine issue added tensions to the U.S.-Russia ties which have remained strained amid the ongoing probe into Russian interference in the 2016 U.S. presidential election.
Washington announced on Friday that it has decided to sell advanced weapons to Ukraine to help update its defense capabilities. The move infuriated Russia, which said the U.S. decision will lead to "new bloodshed."

The arsenal sale is reportedly to include Javelin anti-tank missiles, which Kiev has long desired.
Tillerson also asked Russia to return its representatives to the Joint Center for Control and Coordination of the Ceasefire (JCCC), according to the statement.
The JCCC, consisting of Russian and Ukrainian officers, was set up in September 2014 under an agreement between Russia and Ukraine to assist the implementation of the Minsk agreements for a settlement in Ukraine.
Earlier this month, the Russian Foreign Ministry said the Russian military will abandon the JCCC due to Kiev's "obstruction" of its activities.
Ukraine launched a military operation in its southeastern Donbas region in April 2014, after local residents refused to recognize the new pro-West Ukrainian authorities and sought independence.
Armed conflicts have been plaguing Donbas since then and have claimed more than 10,000 lives.
In Tuesday's phone call, Tillerson and Lavrov also discussed the situation on the Korean Peninsula, with both sides agreeing to continue to work toward a diplomatic solution to the denuclearization of the peninsula, said the U.S. State Department statement.
Tensions have been mounting in the region following one nuclear test and multiple ballistic missile launches conducted by Pyongyang earlier this year.