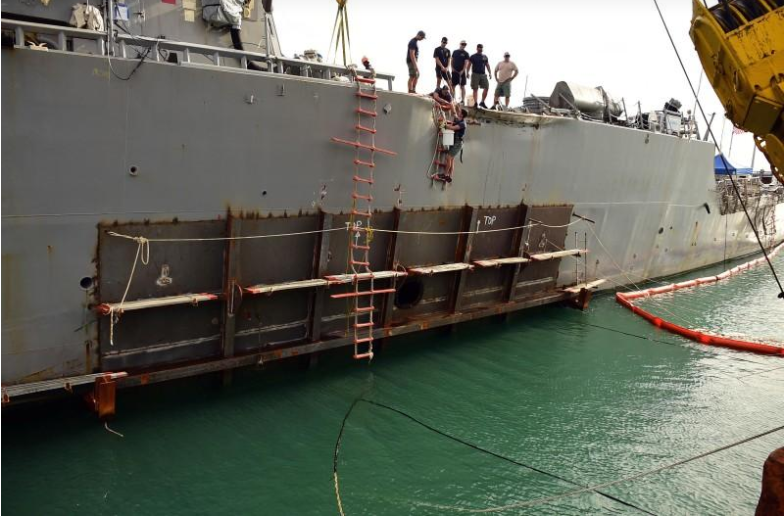 A temporary patch welded to the area damaged by a collision aboard USS John S. McCain (DDG 56) is pictured at Changi Naval Base in Singapore September 21, 2017. Photo: Reuters

The U.S. Navy announced a series of systemic reforms on Thursday aimed at restoring basic naval skills and alertness at sea after a review of deadly ship collisions in the Asia-Pacific showed sailors were under-trained and over-worked.

Seventeen sailors were killed this year in two collisions with commercial vessels involving guided-missile destroyers, the Fitzgerald in June off Japan and then the John S. McCain in August as it approached Singapore.

“What happened was a gradual erosion of the margins of safety,” Admiral John Richardson, who as the chief of naval operations is the Navy’s top uniformed officer, told a news briefing, as he unveiled the results of the broad Navy review.

Rising pressure to meet demands for more and more Navy operations, particularly in the Asia-Pacific, led those in command to rationalize declining standards that ranged from basic seamanship to operational safety, Richardson said.

The Navy’s review called for reforms that will cost between $400 and $500 million over the next five to six years, including periodic, standardized assessments of seamanship and bolstering training of navigation fundamentals.

It also involved ensuring back-to-basics measures like ensuring sailors get enough sleep. The Navy said fatigue was a contributing factor in the Fitzgerald and John S. McCain collisions.

Senator Roger Wicker, the chairman of the Senate Seapower Subcommittee, said the Navy needed more ships to meet the demands for operations at sea. Boosting the size of the Navy is a key objective of Republican President Donald Trump.

“We are asking too few ships to do too many things,” said Wicker, a Republican.

Representative Mac Thornberry, who heads the House Armed Services Committee, also said the sailors’ deaths were “entirely avoidable” and added the Navy was being asked “to do too much with too few resources.”

“The Navy is committed to addressing these issues, but they cannot fix them on their own. Congress has a role to play as well,” Thornberry said.

“I am ready to support the Navy’s request for any additional training, manpower, or equipment they need to prevent these tragedies in the future.”

During the summer, there was speculation that cyber warfare might have been to blame for the repeated mishaps, which stunned the Pentagon. The Navy, during its investigations, ruled out the possibility that hacking was to blame.

“These ships in the 7th Fleet did not master the fundamentals,” Richardson said.