BEIJING, Aug. 26 -- A foreign ministry spokesperson on Monday urged the United States to not misjudge the situation and immediately stop its wrong actions. 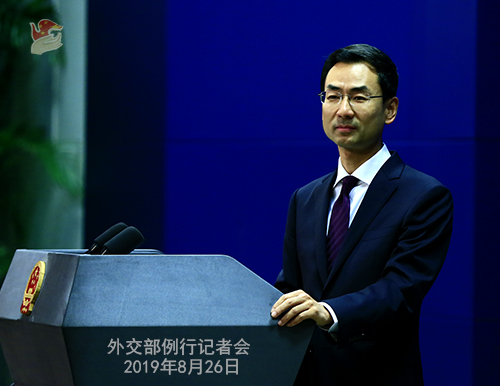 Spokesperson Geng Shuang made the call in response to a query about China's countermeasures to the U.S. announcement on Aug. 24 of a decision to levy an additional duty on some 550 billion U.S. dollars worth of Chinese imports.

"We strongly urge the United States not to miscalculate the situation and immediately cease its wrong actions. If the United States implements its plan of raising tariffs, China will definitely continue to take measures and safeguard its own legitimate rights," said Geng.

The United States' moves severely violated the consensus reached by the heads of state of China and the United States in Osaka, Japan, trampled on the multilateral trading rules, undermined the interests of both countries, threatened the security of the global value and supply chains and impeded world trade and economic growth, Geng said.

"It is an act solely intended to injure others, but it will only end up ruining themselves, and it is not constructive at all," he said.

When responding to a question about President Trump's tweets asking U.S. companies to "find alternatives to China," Geng said they run counter to the market economy and free competition rules, as well as the trend of economic globalization.

"It will surely be questioned and opposed by all stakeholders, including U.S. companies," he said.

He called on the United States to heed opinions from different fields, seriously consider the pros and cons and not to act on impulse.