A workshop has been held in the United Arab Emirates with participants holding heated discussions on a book about Chinese President Xi Jinping's governance philosophy. 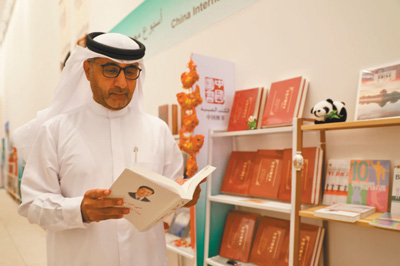 Chinese President Xi Jinping's book "The Governance of China," which outlines the leader's political ideas and vision for China, has been exhibited in Abu Dhabi, capital of the United Arab Emirates, ahead of his visit to the country. [Photo: Xinhua]

Chinese President Xi Jinping's book "The Governance of China," which outlines the leader's political ideas and vision for China, has been exhibited in Abu Dhabi, capital of the United Arab Emirates, ahead of his visit to the country.

More than 200 representatives from political, academic, publishing and press circles attended the event and shared their ideas after reading the book.

"The UAE is a major Belt and Road partner of China. We should try to promote Sino-Arab cultural communication, including in publication, news media, TV and film, as well as people-to-people exchanges. This will help the national renewal of the two sides and their co-operation."

Many Arab participants at the event say the book will help the people in the UAE and other countries to better understand the Chinese leader's thoughts and the historical achievements made by China.

"It's really important to have the addition of the Arabic language. This will enrich the experience with all the Arabic speakers, not only in the UAE, but the region itself. For us, that is important as well. Choosing the UAE, prior to the president's visit is something that we are privileged to have. The importance as well lays between the content of the book itself and how we share the same values,"

Some publishers and readers say that the book, which highlights Xi's global vision, will provide a strong reference point for Arab countries. Egyptian publisher Hussein Ismail is one of them.

"Many people in Egypt, in my country, they asked me how can they get this Arabic version of the book, and some Arab and Egyptian newspapers and media talked about it. Many people are paying attention to China and they want to know the thoughts of President Xi in different areas, in politics, in economics, in social affairs, in different issues. So I think many people are willing to have an idea to read this book,"

Hemmat Lashin, chairman of the China Today reader's club in the UAE, says the book impresses her a lot, because many profound ideas are explained in plain language, which strikes a chord with the ordinary people.

"It's very, very interesting in many cases and I love the part when he talked about the family, about the lady. And he always mention [things] like the good society starts from the family. The book is a very good reference to reflect because it reflects the vision of Xi Jinping about his idea in everything, even the relation between China and the Arab countries, the relation between China and the global [community]. So we are learning a lot from this book."

President Xi Jinping will pay state visits to the UAE, Senegal, Rwanda and South Africa from July 19 to 24, attend the 10th BRICS summit from July 25 to 27 in Johannesburg, and visit Mauritius during a stopover.