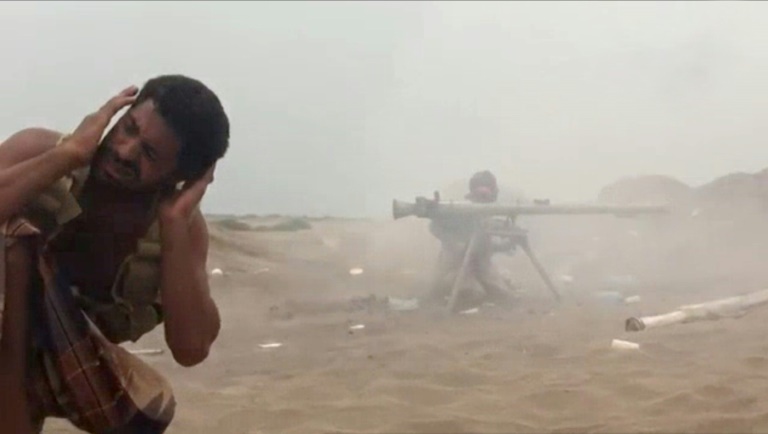 An image grab from AFPTV video shows a pro-government Yemen fighter bracing as another fires a recoilless gun in Yemen's Hodeida province on June 16, 2018 (Photo: AFP)

The UAE, a key player in the coalition battling Huthi rebels in Yemen, on Monday warned the insurgents to withdraw unconditionally from the flashpoint port city of Hodeida, after UN peace efforts fizzled.

"There can be no conditions in any offers to withdraw," the United Arab Emirates' minister of state for foreign affairs, Anwar Gargash, told a press conference in Dubai.

"If the rebels wanted to set conditions, they should have thought of that a year ago... Now is not the time to negotiate."

Huthi rebels have controlled Hodeida, a key entry point for desperately needed aid, since 2014, when they drove the government out of the capital Sanaa and seized large swathes of the country.

Neighbouring Saudi Arabia and its allies -- chief among them US-trained UAE troops -- intervened in the conflict on the government's side in March 2015, sparking what the United Nations has called the world's worst humanitarian crisis.

The alliance last week launched a major operation to drive the rebels out of Hodeida, triggering fears of a fresh humanitarian crisis in a country already on the brink of famine.

Gargash's statement came hours before the UN's top Yemen envoy, Martin Griffiths, was due to brief the Security Council on his efforts to end the crisis over Hodeida, whose port handles over 70 percent of Yemen's imports.

Griffiths, who has been in Sanaa since last week, was to brief the Security Council, meeting behind closed doors at 3:00 pm (1900 GMT), diplomats in New York said.

Gargash said the Saudi and UAE-led offensive aimed "to help the UN envoy in his last chance to convince the Huthis to withdraw unconditionally from the city and avoid any confrontation".

Griffiths held two days of talks with the Huthis over the weekend in Sanaa, but the rebels rejected a ceasefire under current conditions.

The head of their unofficial government, Abdulaziz Saleh bin Habtoor, accused Saudi-led forces of "escalating their attacks on the western coast when they felt there were serious moves towards a solution".

The rebels, on their Al-Masirah television, reported at least 10 air strikes Monday in different areas of Yemen, including the west coast, although there was no independent confirmation.

The Saudi alliance imposed a near-total blockade on Hodeida port earlier this year, alleging Iran was using it as a major conduit for illicit arms deliveries to the Huthis.

Gargash said on Monday that his country and its allies aimed to "avoid civilian casualties", adding that the operation was "going very well".

Civilians deaths have not yet been confirmed in Hodeida.

Four UAE troops have died in the operation, according to state media, while medical and military sources say at least 164 mostly rebel fighters have died.

Gargash said the Arab coalition had kept the Hodeida-Sanaa road "open for the Huthi militias to withdraw".

The UAE minister denied reports that French troops had been helping the coalition to take Hodeida, but said France had offered to remove mines when it becomes necessary.

The Saudi and Emirati-backed assault has displaced thousands of families as loyalist forces battle towards the Red Sea port city.

Rights groups, including the International Committee of the Red Cross, have been forced to suspend operations in the area.

Since 2015, the war for control of the Arab world's poorest country has killed around 10,000 people and triggered what the UN says is the world's largest single humanitarian crisis.

Some 22 million people are now in need of aid in Yemen, with 8.4 million on the brink of starvation.