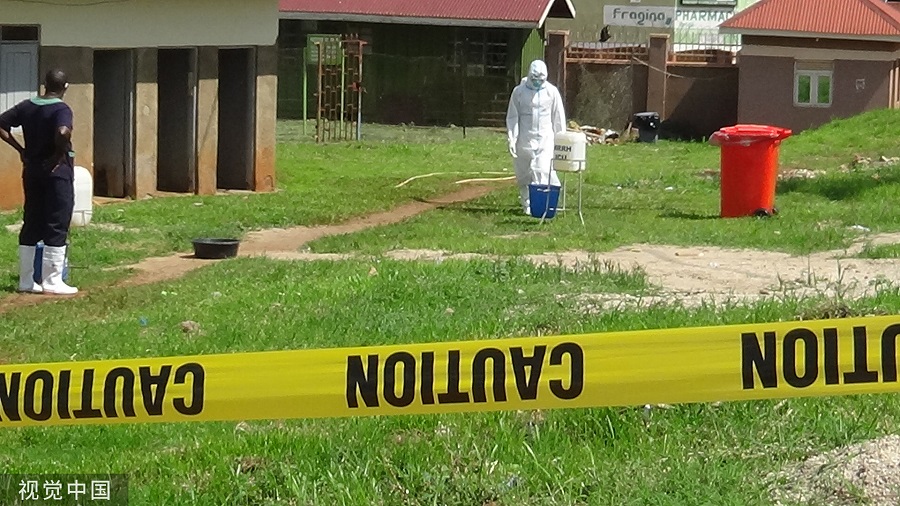 Health measures are taken at Mubende Regional Referral Hospital after an outbreak of Ebola in the country in Mubende, Uganda on September 20, 2022. (Photo: CFP)

The ministry said in a tweet late on Saturday there are 29 active cases on admission and 19 deaths, all suspected to have died of Ebola.

Minister of Health Ruth Aceng convened a meeting in Mubende district, the epicenter of the outbreak, earlier on Saturday in a bid to strengthen the response measure.

Uganda announced the outbreak of the deadly disease on Sept. 20 after a 24-year old male tested positive for the disease died on Sept. 19.

Uganda has had over five Ebola outbreaks in the last two decades, mostly along its western regions close to the Democratic Republic of Congo, according to the ministry.

The Ebola virus is highly contagious and causes a range of symptoms including fever, vomiting, diarrhea, generalized pain or malaise and in many cases internal and external bleeding.

Mortality rates of Ebola fever, according to World Health Organization, are extremely high, with the human case fatality rate ranging from 50 percent to 89 percent, depending on viral sub-type.