Uganda strives to save Lake Victoria to provide clean water 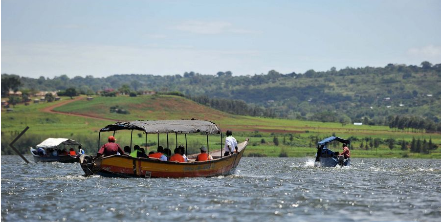 Tourists take boats at the north shore of Lake Victoria in Jinja of Uganda, where is the source of the River Nile, Oct. 24, 2009. (File Photo: Xinhua)

Over 40 km east of Uganda's capital Kampala, a massive water treatment plant on the shores of Lake Victoria is being constructed.

Besides the treatment plant, more than 1 million trees are being planted and the fishermen at the Katosi landing site have been relocated to cut human activities' impact on the natural vegetation on the shoreline.

These are part of ongoing efforts to clean up Lake Victoria, the world's second largest fresh water body.

Over 40 million people, according to the World Bank, derive their livelihood from the lake, shared by Uganda, Tanzania and Kenya.

Aerial views on the lake show green water which, according to environmental experts, is algae caused by unfiltered waste effluents into the lake.

Wetlands on the shoreline, which are supposed to filter the water before it gets into the lake, are being destroyed due to increased human activity.

This pollution, according to Uganda's state-run National Water and Sewerage Corporation (NWSC), has pushed up the cost of treating water by about 100 percent.

According to the NWSC, the corporation used to spend an average 500 million shillings (about 135,135 U.S. dollars) a month to treat water, but the figure has now shot up to close to 1 billion shillings (270,270 dollars) per month.

The demand for clean piped water in the capital Kampala and the surrounding districts of Mukono and Wakiso has more than tripled due to fast urban development and improved economic growth in the last two decades.

According to the NWSC, the Kampala metropolitan area consumes over 250 million liters of water daily but the water agency can only supply 232 million liters per day.

A parliamentary committee on natural resources, which visited the construction site late last year, said the project followed a high degree of environmental conservation and that they are optimistic the project will make Lake Victoria one of the least-polluted water sources.

"The conservation plants and the works we have seen on the ground are very impressive," said Keefa Kiwanuka, chairperson of the parliamentary committee.

Kiwanuka and other members on the committee urged the public to heed government's call to stop destroying wetlands that act as filter-beds for Lake Victoria.

NWSC corporate affairs manager Samuel Apedel said the corporation has also revamped and upgraded its Bugolobi sewerage treatment plant in the capital Kampala. He said the move is part of the utility's wider plan to keep Lake Victoria waters clean.

The facility will also divert and first treat the sewage flowing from Nakivubo channel before releasing it into the lake, Apedel added.

Scientists and environmental experts warn that livelihoods of fishing communities could be adversely affected if pollution of the lake goes on unabated.

They say increased pollution of the waters threatens aquatic life and could wipe out some fish species in the lake.