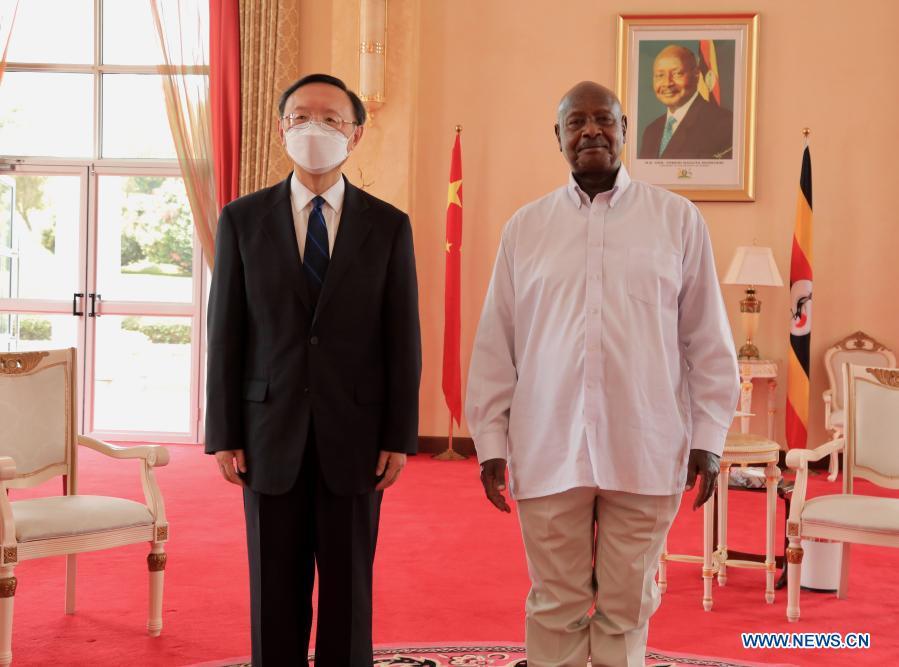 Ugandan President Yoweri Museveni (R) meets with Yang Jiechi, a member of the Political Bureau of the Communist Party of China (CPC) Central Committee and director of the Office of the Foreign Affairs Commission of the CPC Central Committee, in Entebbe, Uganda, Feb. 21, 2021. (Photo by Hajarah Nalwadda/Xinhua)

Yang, a member of the Political Bureau of the Communist Party of China (CPC) Central Committee and director of the Office of the Foreign Affairs Commission of the CPC Central Committee, conveyed Chinese President Xi Jinping's cordial greetings to Museveni and congratulated him on winning re-election in the presidential election.

Yang said that with the personal care and promotion of the two heads of state, China-Uganda relations have developed smoothly. China supports Uganda in pursuing a development path suited to its national conditions and stands ready to work with Uganda to further deepen political mutual trust, enhance the complementarity of development strategies, expand practical cooperation within the framework of jointly building the Belt and Road Initiative and implementing the outcomes of the Beijing Summit of the Forum on China-Africa Cooperation, and push the bilateral comprehensive cooperative partnership to a new height.

China is ready to continue cooperation with Uganda in fighting the epidemic and jointly promote the building of a community of common health for mankind, said Yang.

Yang said that China and Uganda have always supported each other on issues involving each other's core interests and major concerns, and opposed interference in other countries' internal affairs in the name of human rights and democracy. China is willing to work with Uganda to firmly safeguard the international system with the United Nations as the core and the international order based on international law.

Museveni asked Yang to convey his sincere greetings to Chinese President Xi Jinping, thanked China for its selfless help in infrastructure construction, agriculture and anti-epidemic efforts for a long time, and appreciated the important positive role of China's experience in developing Africa's economy and improving people's livelihood on the continent.

He said that Uganda attaches great importance to the traditional friendship between Uganda and China, welcomes China's expansion of investment in the country, expects more products to enter into the Chinese market, and is willing to work with China to build the Belt and Road Initiative with high quality, so as to promote greater development of the comprehensive cooperative partnership between Uganda and China.

Museveni stressed that Uganda abides by the one-China principle, opposes foreign interference in China's internal affairs, and is willing to strengthen coordination and cooperation with China in international and regional affairs.