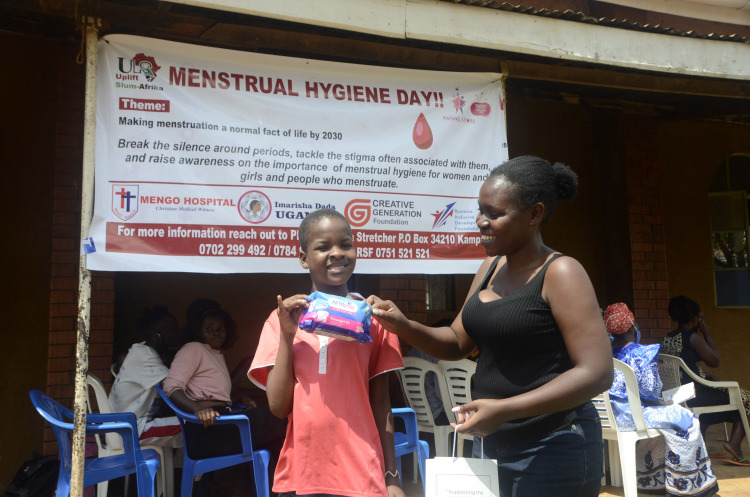 A woman hands over reusable sanitary pads to a teenage girl during an event to mark the Menstrual Hygiene Day in Kampala, Uganda, on May 28, 2022. (Photo: /Xinhua)

KAMPALA, May 30 (Xinhua) -- In many poverty-stricken areas in Uganda, teenage girls skip classes during the menstrual cycle because they cannot afford sanitary pads.

The absenteeism results in poor performance which affects their self-esteem and eventually makes them drop out of school, according to the ministry of education.

In Kalerwe, a slum area on the outskirts of the capital Kampala, Joanna Atukunda, 29, is determined to change the narrative.

Atukunda told Xinhua that step by step, girls from poor families would be able to stay in school because they have pads.

As the world commemorated Menstrual Hygiene Day on May 28, Atukunda distributed free reusable sanitary pads in the area, reaching over 100 teenage girls.

Atukunda and her team also raised awareness about the importance of good menstrual hygiene management.

"I lost both my parents when I was five years old. My guardians, who helped me to get proper education, used to reside near slum areas in the western Ugandan district of Mbarara. By the time I was 12 years old I would see how young girls in my neighborhood slums faced difficulty whenever they were in their menstrual period," Atukunda said.

After finishing her university degree specializing in gender and women health four years ago, Atukunda embarked on her passion of equipping adolescents in slum areas with knowledge on sexual reproductive health rights and quality education.

She said girls in slum areas end up getting pregnant as they get money from men to buy sanitary pads.

Harriet Namazzi, a teenager in Katanga, another slum in Kampala, told Xinhua that she stays with her mother who cannot afford to look after a family of four children. Namazzi said sometimes she engages in petty work to earn money which she gives to her mother.

Eseza Nakayemba, a community mobilizer, said with the help of people like Atukunda, they carry out outreaches sensitizing youths especially teenagers about managing menstrual hygiene among others.

Joyce Moriku Kaducu, minister of state for education, said recently that the ministry was continuing to raise awareness on cultural taboos and how to end the stigma surrounding menstruation.

She was speaking ahead of the Menstrual Hygiene Day commemorated under the theme "Making menstruation a normal fact of life by 2030".

The minister appealed to the media and cultural leaders to influence a shift in attitudes and perceptions around menstruation.