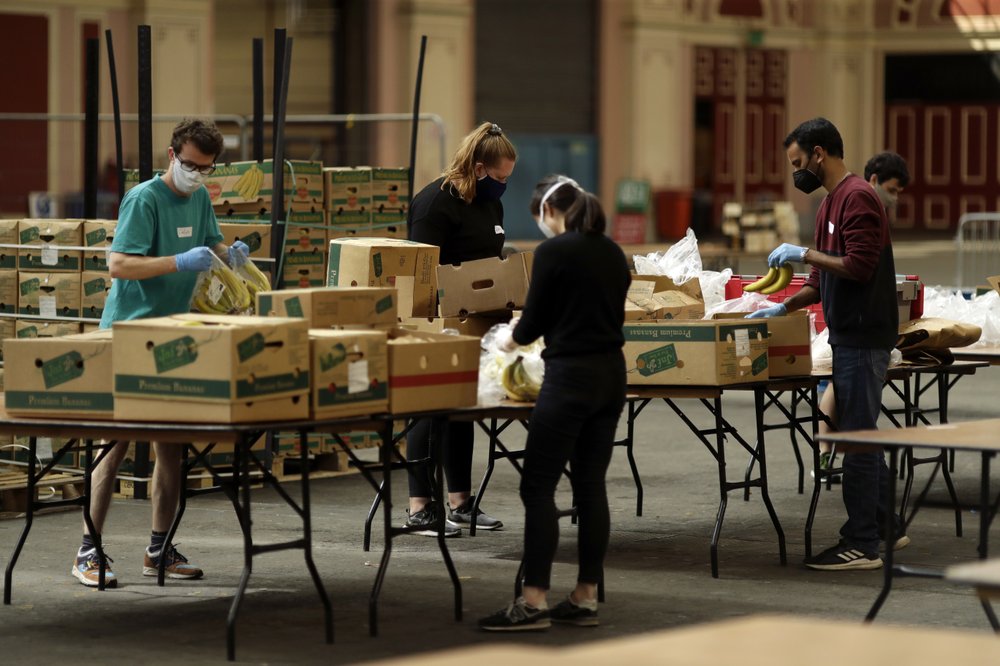 Volunteers for the Edible London food project remove the plastic packaging and check the quality of donated bananas to be put in food packs and delivered to residents who need it in the Haringey Council area, at a hub setup as a result of coronavirus inside the Alexandra Palace venue, in north London, Tuesday, April 21, 2020. (Photo: AP)

LONDON, April 22 (Xinhua) -- Health Secretary Matt Hancock said Wednesday that Britain is "at the peak" of the COVID-19 outbreak while the rules of social distancing "is making a difference".

The remarks came as the Department of Health and Social Care announced that another 759 people who tested positive for COVID-19 have died in hospitals in Britain as of Tuesday afternoon, bringing the total number of novel coronavirus-related deaths to 18,100.

As of Wednesday morning, 133,495 people have tested positive for the disease, marking a daily increase of 4,451, said the department.

Hancock told lawmakers that until the five tests listed by the government for exiting the lockdown are met, the social distancing measures in place will not be adjusted.

Those tests include: the NHS (National Health Service) can continue to cope; the daily death rate falls sustainably and consistently; the rate of infection is decreasing; the operational challenges have been met; and there is no risk of a second peak.

"(As) we bring the number of new cases down, so we will introduce contact tracing at large scale," said Hancock.

At Wednesday's Downing Street coronavirus briefing, British Foreign Secretary Dominic Raab reaffirmed that the dates for lifting the lockdown "are not something I recognise".

"It would be a mistake to take our eye off the ball now," said Raab, also first secretary of state, who is deputizing for recovering Prime Minister Boris Johnson.

Chief Medical Officer for England Chris Whitty said in the long run the exit from lockdown will be either a vaccine or highly effective drugs to cure the disease, adding that the probability of having either of those by the end of the year is "incredibly small".

"We'll have to rely on social measures -- it's going to take a long time... we have to accept we are going to be with it (the disease) globally for the foreseeable future," he said.

Meanwhile, Chief of the Defence Staff General Nick Carter said the military is working with the government and the NHS to create a "very sophisticated" system to ramp up testing across the country.

Part of this will involve a move to "upscale" mobile testing units, which he compares to pop-up libraries. He says the system must "match demand to supply in the right way".

The Department of Health and Social Care announced Wednesday that the rapid creation of three new Lighthouse Labs in Milton Keynes, Glasgow and Alderley Park in Cheshire is increasing the country's capacity to test for the virus, with each site scaling up to test tens of thousands of patient samples each day.

The new mega-labs are staffed by an army of highly qualified staff and volunteers from industry and academia, drawn from across the country.

The government has previously pledged to achieve 100,000 coronavirus tests a day by the end of this month.

"Every day across the country we are increasing our coronavirus testing capacity. Just a few weeks ago we launched the first Lighthouse Lab in Milton Keynes, and now it is part of the biggest network of diagnostic labs in British history," said Britain's National Testing Coordinator John Newton.