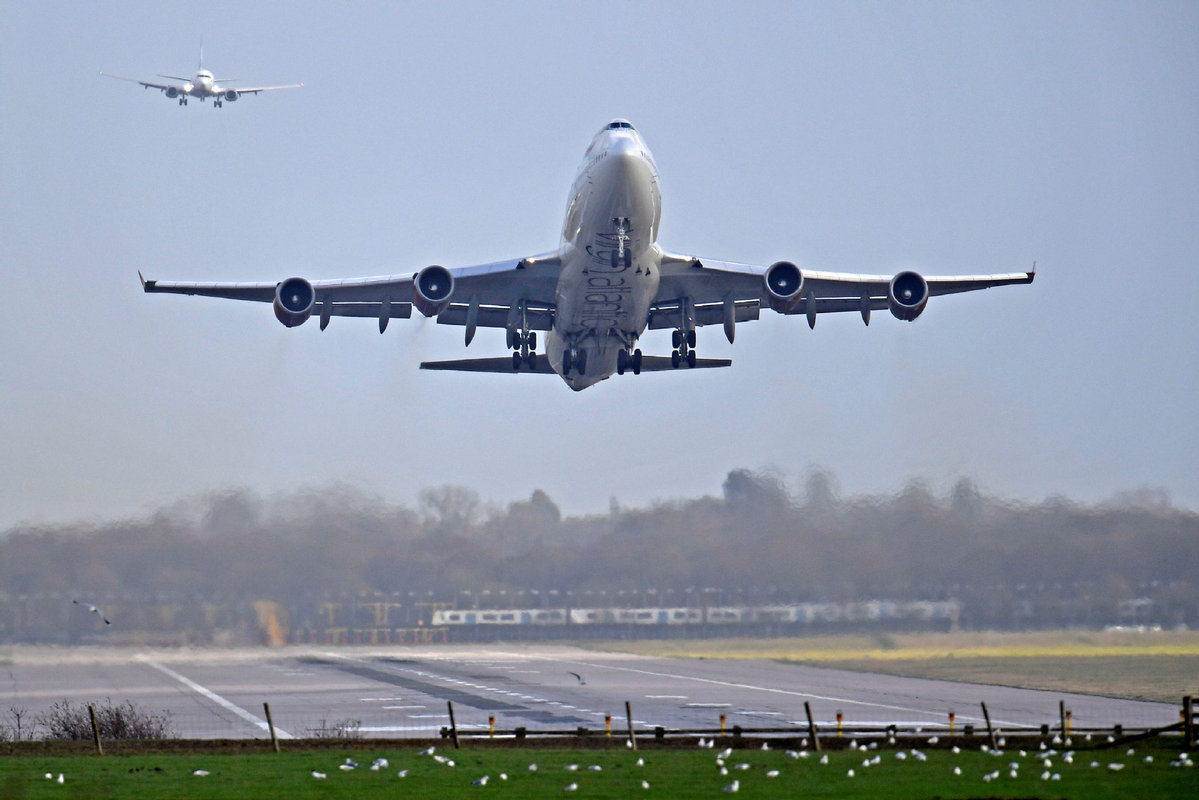 An airplane takes off at Gatwick Airport, in Britain. (Photo: Agencies)

Karen Dee, the chief executive of the Airport Operators Association, urged the British government to set out plans for how airports will survive financially during the crisis.

"Airports are currently keeping their infrastructure open to support vital and critical services, such as post, freight, emergency services, military and coastguard flights, as well as to help keep the lights in the UK on through supporting flights to offshore oil, gas and wind operations," she told The Guardian newspaper.

"Airports are doing so while running on empty -- there is only so long they can run on fumes before having to close temporarily to preserve their business for the future," she said.

"Government needs to help cover airports' operational costs by, for example, urgently providing relief from regulatory, policing, air traffic and business rates costs in the current and the coming tax year," she added.

Heathrow Airport lost its status as Europe's busiest airport as it recorded a loss of 1.5 billion pounds (about $2.04 billion) in the first nine months of 2020 due to COVID-19.

Passenger numbers between July and September 2020 were down by more than 84 percent compared with the same period in 2019, leading the west London hub to be overtaken by Paris Charles de Gaulle as the busiest in Europe.

Tim Alderslade, the chief executive of Airlines UK, which represents all UK registered airlines, said that if by Easter the restrictions are not lifted, the industry will be "in a really difficult place".

Easter is a Christian holiday which falls on April 4 this year.

"Easter is a date that we have got in mind as to when we can start to have an aviation sector again because if we don't start to bring in revenue to the sector, we are going to be in a really difficult place indeed because we have now had pretty much 12 months without any revenue coming in, which is just not sustainable and airlines are effectively staying in business by taking on billions of pounds of debt, which will need to be paid back," Alderslade said.

British Prime Minister Boris Johnson announced Friday that Britain will close all travel corridors to the country from 0400 GMT on Monday in a bid to keep out new coronavirus variants.

The new measure means that travellers entering the country must have proof of a negative COVID-19 test in previous 72 hours.

Anyone arriving in Britain must quarantine for 10 days or they have the choice of doing an extra test on day five to shorten the isolation, Johnson said.

Another 55,761 people in Britain have tested positive for COVID-19, bringing the total number of coronavirus cases in the country to 3,316,019, according to official figures released Friday.

Another 1,280 have died within 28 days of a positive test. The total number of coronavirus-related deaths in Britain now stands at 87,295, the data showed.

To bring life back to normal, countries such as Britain, China, Germany, Russia and the United States have been racing against time to develop coronavirus vaccines.