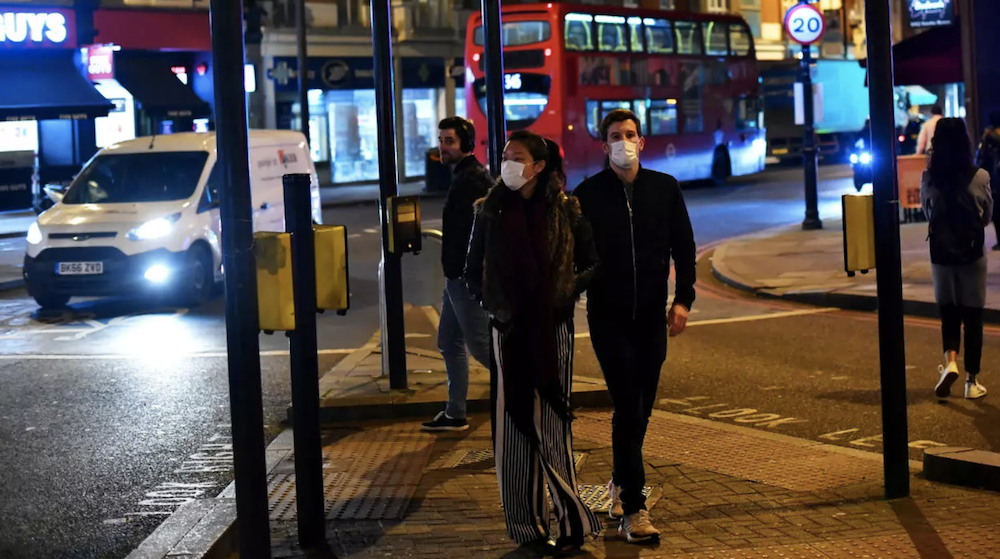 A couple wearing face masks walk down Clapham High Street, as the number of coronavirus cases grow around the world, in London, Britain March 16, 2020. (Photo: AFP)

Britain on Tuesday ramped up its response to the escalating coronavirus outbreak after the government imposed unprecedented peacetime measures prompted by scientific advice that infections and deaths would spiral without drastic action.

More firms sent staff to work from home and public transport emptied after the government called for an end to "non-essential" social contact and unnecessary travel as confirmed COVID-19 cases climbed to more than 1,500 and deaths rose to 55.

More stringent restrictions are expected in the coming days, including forcing people with serious health conditions to stay at home for three months to ease pressure on health services.

The government was due later Tuesday to set out details of emergency laws in parliament, where members of the public have now been banned from attending debates, meeting lawmakers or visiting.

Prime Minister Boris Johnson had faced criticism for his approach to the pandemic, which involved holding off on imposing the strict measures seen in other countries to combat the spread of COVID-19.

But he stepped up the response after scientists warned hundreds of thousands of people could die in Britain and the United States if there was only a focus on delaying and slowing infections.

It would require "a combination of social distancing of the entire population, home isolation of cases and household quarantine of their family members".

"This type of intensive intervention package... will need to be maintained until a vaccine becomes available (potentially 18 months or more)," the report's authors said.

They predicted transmission would "quickly rebound if interventions are relaxed".

The lead author of the study, epidemiologist Neil Ferguson, is advising the British government's Scientific Advisory Group for Emergencies, which is helping coordinate its COVID-19 response.

He said he had also shared the projections with US President Donald Trump's administration last week and sent it an early copy of the report over the weekend.

In Britain, that includes people household isolation if a family member has COVID-19 symptoms, staying away from pubs, clubs, restaurants and theatres and a recommendation against mass gatherings, including sporting events.

Johnson's announcement sparked concern about the impact on business, especially in the hospitality industry, amid fears of an extensive economic fall-out from the outbreak.

The British Beer and Pub Association warned thousands of jobs would be lost and pubs would go to the wall without government intervention.

The Creative Industries Federation and Creative England also said the arts faced a "crippling blow" as people stayed away.

Johnson has maintained throughout the government, which has promised a £30-billion package of support for individuals and businesses affected, is being guided by the latest science.

Imperial's report drew on new data from Italy to model how the virus would have an impact in Britain and the United States in an uncontrolled social environment.

It predicted 81 percent of Britons and Americans would become infected, with 510,000 deaths in the UK and 2.2 million in the US, peaking after three months.

If the two countries continued the kind of mitigation policies recently introduced, deaths would only be halved and healthcare system still heavily overburdened, the report said.

It predicted the only feasible way to avoid mass fatalities was by urgently lowering case numbers through suppression tactics.

"It's not possible to do anything other than adopt the strategy announced yesterday," Ferguson told the BBC on Tuesday.

He said their mortality rate modelling had "been increasingly clear it's not the reasonable worst-case but the most likely scenario".

Tim Colbourn, of University College London's Institute for Global Health, called the study "an excellent piece of work from some of the world's best infectious disease modellers".

"The results are sobering though," he added, noting there were "very tough times ahead".

"This has never been tried anywhere ever –- can it work?"