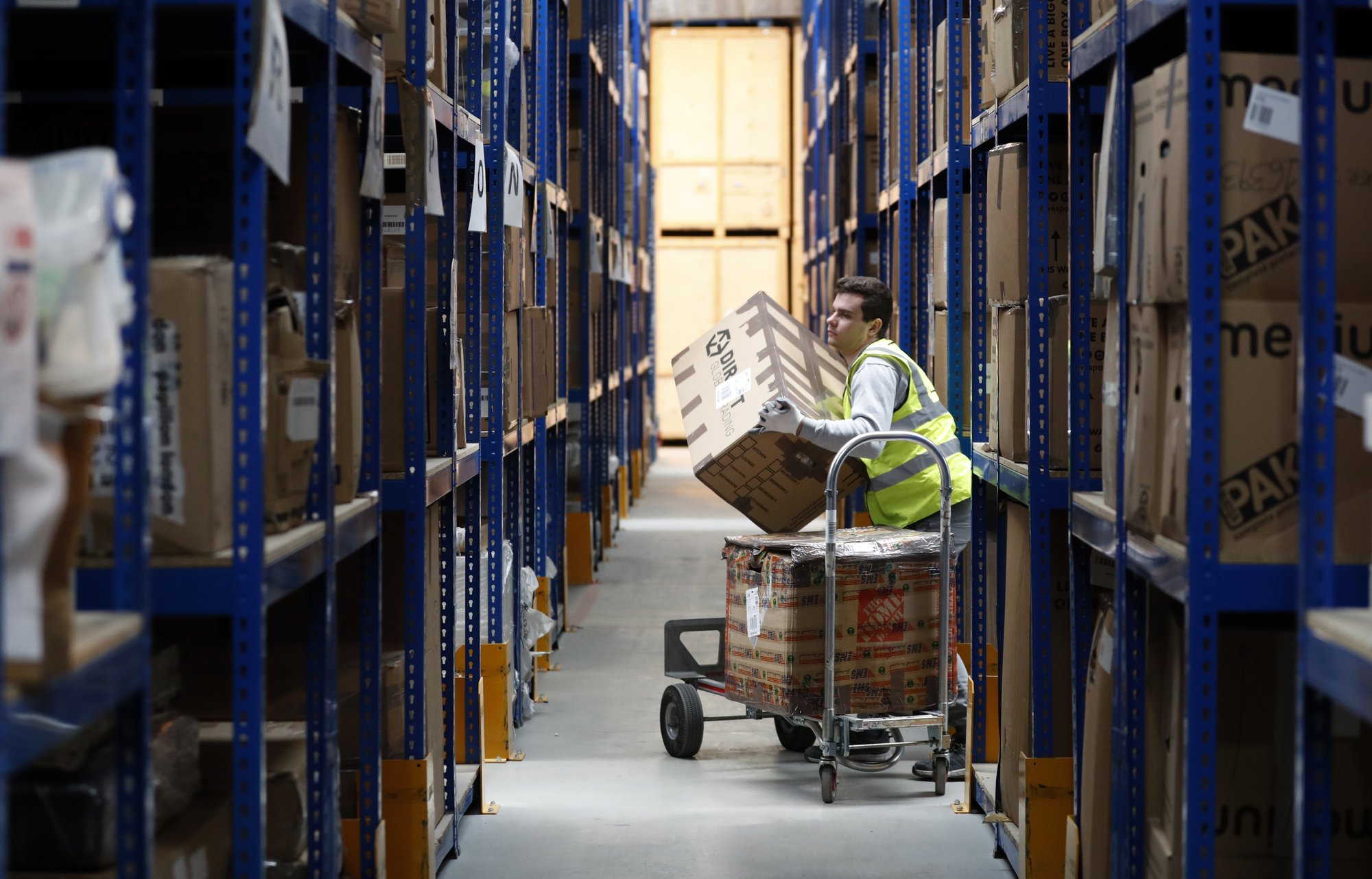 Lovespace warehouse worker Pawel Mazur unloads boxes from a trolley to place them into their allocated zones at the warehouse in Dunstable, England Monday, Jan. 14, 2019. (Photo: AP)

Brexit has British business owners on edge — and that is great news for Lovespace, a storage and warehousing company outside London.

Lovespace, which collects boxes from customers, stores them and then returns the goods when needed, says revenue from businesses doubled over the past year and inquiries quadrupled as enterprises large and small began stockpiling inventory because of concerns they will be cut off from suppliers if Britain leaves the European Union without an agreement on future trading relations.

“People are working out how to store stuff — how to get things to their own customers as the year progresses,” CEO Steve Folwell said as workers moved boxes around the company’s 20,000 square-foot (1,860 square-meter) warehouse in Dunstable, about 35 miles (55 kilometers) northwest of London. “There’s uncertainty because of Brexit and there’s a lack of trust in the political process at the moment.”

The risk of a no-deal Brexit is increasing amid widespread opposition to the divorce agreement Prime Minister Theresa May negotiated with the EU. While May says her deal is the only way to ensure that trade continues to flow smoothly after Britain leaves the bloc on March 29, UK lawmakers overwhelmingly rejected the agreement late Tuesday because opponents fear it will leave the country tied to the EU for years to come.

Without an agreement on future relations, 40 years of free trade between Britain and the EU would be replaced by tariffs, border inspections and other non-tariff barriers, with potentially devastating impacts on the British economy. The government’s own contingency plans raise the specter of lengthy border delays that could cause shortages of food and medicine, and the Bank of England predicts gross domestic product could shrink by as much as 8 percent this year.

“Businesses would face new costs and tariffs,” said Carolyn Fairbairn, director-general of the Confederation of British Industries, which represents 190,000 businesses. “Our ports would be disrupted, separating firms from the parts they need to supply their customers.”

Among those taking precautions is Richard Ellison, the founder of Wanderlust Wine, who imports wines from small producers off the beaten track. Worried that supplies to his customers could be interrupted, he’s stocked up in advance to brace for disruption at the border and the potential for an increase in paperwork.

“Everything will have to be checked at the border,” he said, explaining his precautions. “We bought quite a lot in advance — an extra pallet or two to tide us over.”

Companies ranging from supermarket giant Tesco, which imports food from continental suppliers, to carmakers like Ford, who rely on European parts to feed British production lines, have been lobbying politicians for clarity about future trading relations ever since UK voters backed leaving the EU in a June 2016 referendum. Now they are taking action to ensure they can continue to operate in the event no deal is reached.

A survey of UK manufacturers found that stockpiles of both finished goods and raw materials rose at near-record rates in December as businesses prepared for a possible disruption in supplies, according to the Chartered Institute of Procurement & Supply.

More than 60 percent of UK manufacturers are preparing to stockpile goods and 29 percent have already begun to do so, according to a November survey of 242 companies by EEF, the manufacturers’ organization. Some are even erecting new buildings to increase storage capacity.

Charlie Pool, CEO of Stowga, which loosely describes itself as the Airbnb of British warehousing, said customers looking for storage space searched the company’s site 10,000 times in December, up from an average of 3,000 a month. Businesses are sometimes even paying deposits to secure their bookings, which isn’t standard practice, Pool said, comparing it to paying for a hotel before arrival.

“The data we have is proving that stockpiling for Brexit is definitely a thing,” he said. “It’s happening now.”

That is driving up the cost of storage space. The average price to store a pallet of goods jumped to 2.10 pounds ($2.71) a week last month from 1.85 pounds in September. Pool said he wouldn’t be surprised if exceeded 3 pounds should a no-deal Brexit become a reality. That would still be relatively cheap compared with the cost of not getting products to the end consumers, he said.

The dangers of Brexit to business are evident even for storage companies like Lovespace. Despite the boom in revenue, a potential investor pulled back last year because of the uncertainty caused by Britain’s exit from the EU.

The investor said “it seems awfully complex to me,” Folwell said. “People are looking at the UK as a bit of a basket case at the moment.”