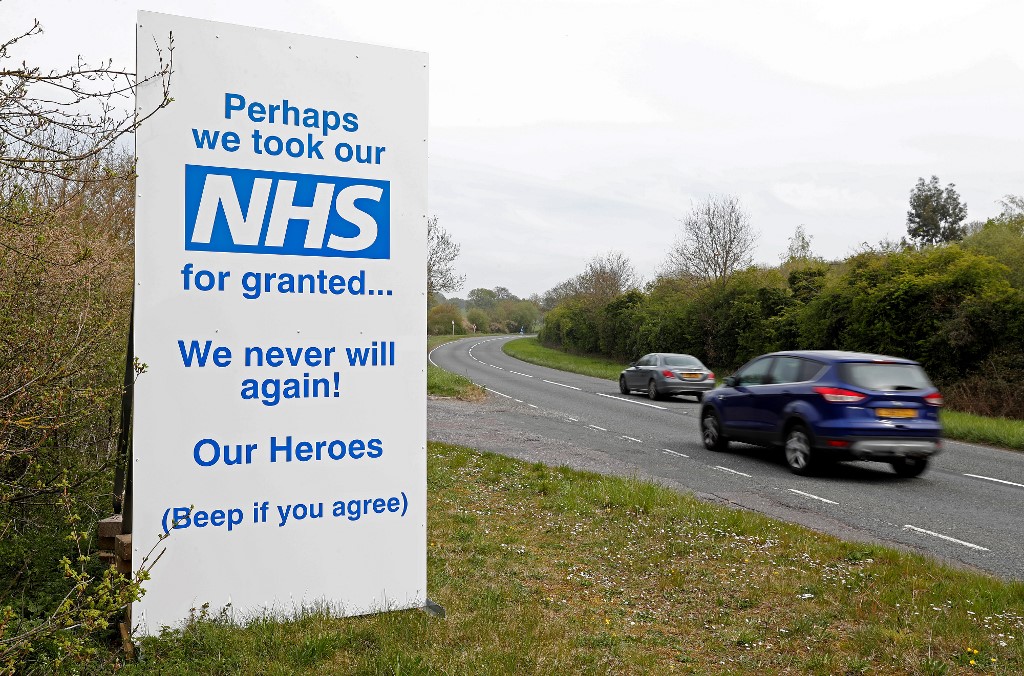 Cars pass a sign on the side of the A30 road in Old Basing, near Basingstoke, west of London on April 16, 2020, reading "Perhaps we took our NHS for Granted...." as life in Britain continues during the nationwide lockdown to combat the novel coronavirus pandemic. (Photo: AFP)

Another 847 people who tested positive for COVID-19 have died in hospitals in Britain as of Thursday afternoon, bringing the total number of coronavirus-related deaths to 14,576, the Department of Health and Social Care said Friday.

As of Friday morning, 108,692 people have tested positive for the virus, marking a daily increase of 5,599, said the department.

During Friday's Downing Street press briefing, the government's Chief Scientific Adviser Patrick Vallance noted that the number of new cases reported in hospitals has become flat over the last few days, and "we would expect this to start decreasing in terms of total number of cases".

Meanwhile, in a bid to accelerate vaccine research, the government launched a taskforce, which will be led by Vallance and Deputy Chief Medical Officer for England Jonathan Van-Tam.

The aim of the move is to "make sure a vaccine is made available to the public as quickly as possible", said Secretary of State for Business, Energy and Industrial Strategy Alok Sharma, who unveiled the taskforce during the press conference.

The taskforce comprises representatives from government, industry, academia and regulators, according to Sharma.

Earlier Friday, the government announced that 21 new coronavirus research projects from the University of Oxford, Imperial College London and Public Health England, among others, will benefit from funding worth around 14 million pounds (about 17.5 million U.S. dollars).

Saying that there are over 100 vaccine projects around the world, Sharma frankly told reporters that most vaccine trials do not work, adding that the vaccine can come from anywhere and "we just need to back lots of horses at the moment."

The British government on Thursday extended the current lockdown measures for "at least three weeks" in a bid to contain the spread of the virus.

Asserting that relaxing lockdown measures would lead to a resurgence of the virus, Dominic Raab, the foreign secretary and first secretary of state, said the government has decided relaxing the measures would make the economic impact worse, not better.