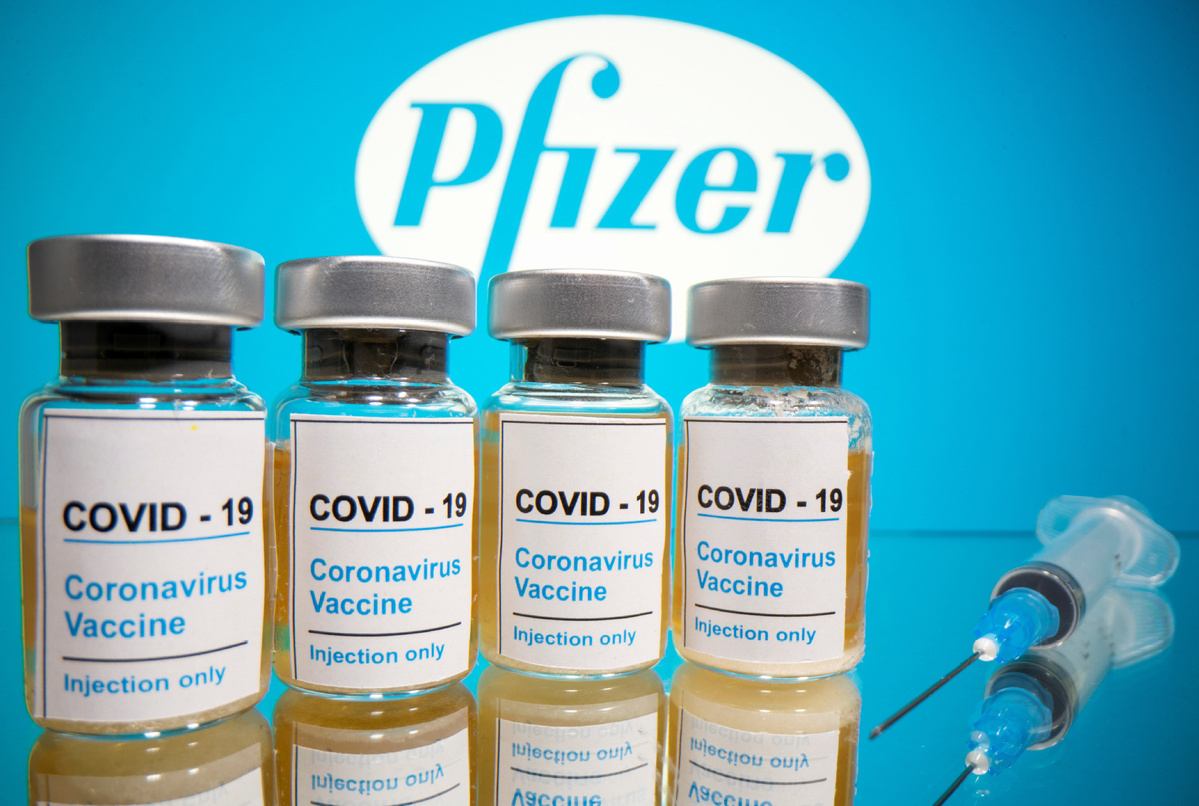 Vials with a sticker reading, "COVID-19 / Coronavirus vaccine / Injection only" and a medical syringe are seen in front of a displayed Pfizer logo in this illustration taken Oct 31, 2020. (Photo: Agencies)

The United Kingdom has defended the decision to green-light use of the COVID-19 vaccine from Pfizer, after health authorities in Europe and the United States questioned the UK's approval process.

The UK is the first nation in the world to authorize use of the vaccine, which will become available to health workers and the elderly next week.

"We are the first to approve it because we've been really, really organized about this from the word go," Van Tam told the BBC. "Our regulator has just been superb in this space and taken unprecedented steps to see data early, and that's why we are where we are."

On Thursday, Anthony Fauci, director of the US National Institute of Allergy and Infectious Diseases, said the MHRA had not approached the approval process "as carefully" as the US Food and Drug Administration.

"If you go quickly and you do it superficially, people are not going to want to get vaccinated," Fauci told Fox News.

His comments echo those of Jens Spahn, Germany's health minister, who said on Wednesday that it is better to have "safe and effective vaccines" than to be the first country to reach approval.

"Nothing is more important than confidence with respect to vaccines," Spahn said.

The European Medicines Agency, or EMA, also questioned the speed at which the UK arrived at its decision, and said that its longer approval procedure was more appropriate, according to a statement provided to the Agence France-Presse news agency.

Van Tam suggested that other drug regulators were attempting to exculpate their own slower progress.

"If you're a regulator that is slightly further behind what do you say to justify your position that you are further behind－ones such as those you have heard," he said. "I don't expect other regulators, particularly the US regulator, to be very far behind."

European officials had voiced their opinions after some UK leaders, including Health Secretary Matt Hancock and Leader of the House of Commons Jacob Rees-Mogg, suggested that Brexit made it easier to reach a decision on the vaccine as the UK did not have to wait on European regulators.

This claim was contradicted by MHRA Chief Executive June Raine, who said that EU law empowers member states to approve medicines without EMA authorization in the case of emergency use.

Pfizer itself welcomed the decision by the MHRA to approve its vaccine, and on Thursday the company confirmed that the state health service would be the sole recipient of the first batch of treatments, following concerns that private healthcare providers would deplete NHS stock.

"COVID-19 has impacted the most vulnerable in our society, so equity has to be central to the deployment of a vaccine in the UK," Pfizer UK Country Manager Ben Osborn said on Twitter. "It's why the NHS are best placed to deliver the Joint Committee on Vaccination and Immunization guidance on vaccines across our four nations."