WORLD UK 'delaying Brexit trade decision' until after US polls

UK 'delaying Brexit trade decision' until after US polls 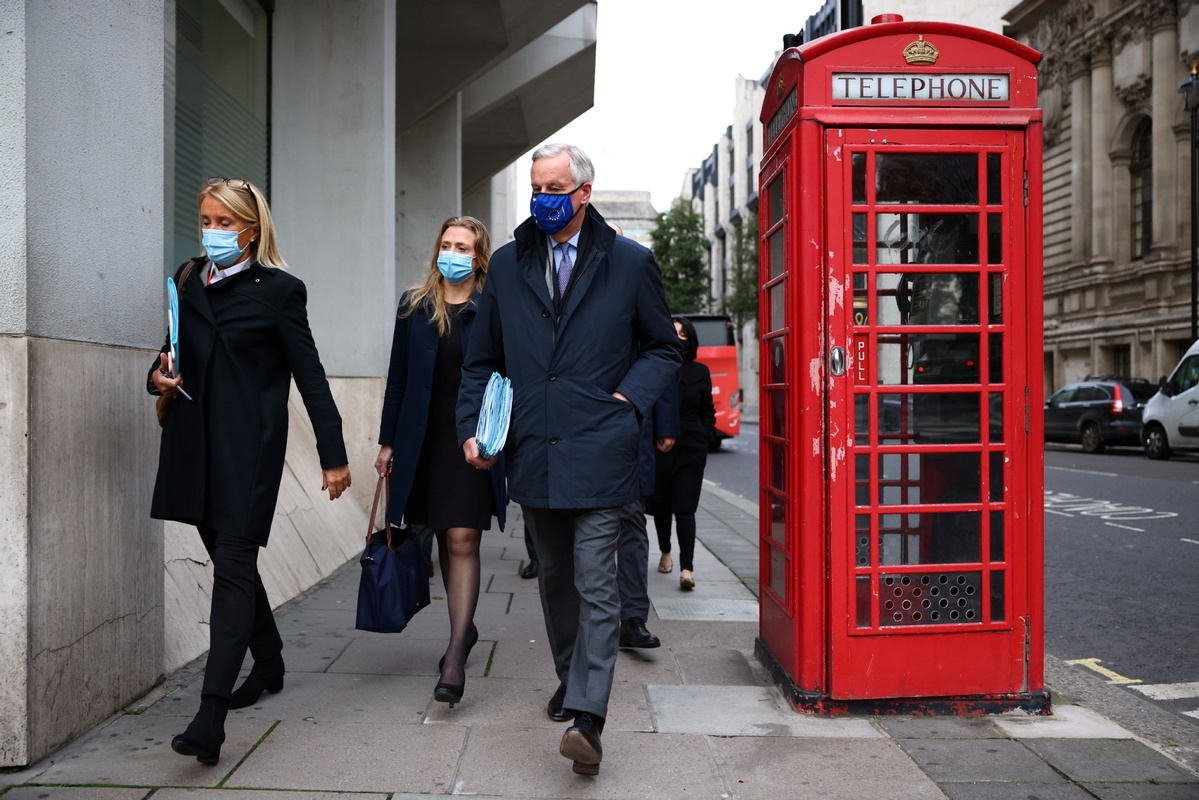 The EU's chief Brexit negotiator, Michel Barnier, arrives at the 1VS conference centre in London, UK on Saturday. (Photo: Agencies)

A former United Kingdom ambassador to the European Union has told Britain's Observer newspaper that some senior EU politicians and officials believe Prime Minister Boris Johnson is stalling for time in trade talks with the bloc.

Ivan Rogers, who was London's top diplomat in Brussels between 2013 and 2017, said they believe Johnson wants to know whether Donald Trump will return to the United States' Oval Office before making up his mind on whether Britain could cope with a so-called no-deal Brexit, in which the nation's departure from the bloc is not accompanied by a comprehensive free-trade deal.

"Several very senior sources in capitals have told me they believe Johnson will await clarity on the presidential election result before finally deciding whether to jump to 'no-deal' with the EU, or to conclude that this is just too risky with (Democratic Party challenger Joe) Biden heading for the White House," the Observer quoted Rogers as saying.

The former ambassador said Johnson would think "history was going his way" if Trump wins on Nov 3 and he continues to have a right-wing ally in the White House who will be likely to strike a quick and substantial post-Brexit US/UK free-trade deal.

Rogers said Biden would be more likely to focus on rebuilding relations with the EU if he emerges as winner.

"I don't think either Biden or his core team are anti-British, but I think they are unimpressed by both Johnson and his top team," Rogers said.

The Guardian newspaper said Kim Darroch, a former UK ambassador to the US, believes Biden would favor a US/EU trade deal over one with the UK.

"Whoever wins in November, the bedrock of the relationship-defense, security, and intelligence collaboration-will remain as strong as ever. But if it's Biden, there are likely to be some issues. The Democrats don't like or support Brexit. They may prioritize trade deals with the Pacific region or the EU over a UK/US deal."

The UK and EU are seeking a free-trade deal in talks that began soon after the nation left the bloc in January. They are currently trading as if the UK is still a member, but that arrangement-a so-called transitional period-ends on Dec 31. If a new trade deal is not in place by then, they will revert to trading under the terms of the World Trade Organization, something UK business groups have warned will lead to long lines at the border and new tariff s.

On Sunday, EU television manufacturers warned they could miss out on the benefits of a free-trade deal and face losing thousands of jobs if the wrong deal is stuck.

Digital Europe, an association that represents technology companies, has written to the European Commission to warn that 3.7 million TVs exported to the UK annually worth 931 million euros ($1.1 billion) could be classified as non-EU imports because of rules Brussels is insisting upon in trade talks.

Those rules detail what percentage of a product can come from outside the bloc and the companies say their assembly of TVs largely comprised of components made outside the bloc means they will be clobbered with new taxes.

"The EU-UK negotiations … are hugely significant for the future of Europe's digital and tech sectors," Digital Europe said in a letter to the EU chief negotiator, Michel Barnier.

And David Wells, chief executive of transit lobbyist Logistics UK, has also weighed in on how the UK and EU should trade in future. He said in a letter to the Sunday Times that a no-deal Brexit would mean import costs for some everyday items would rise by almost a third and that a deal must be found.

The BBC reported that a government spokesperson said in response to the letter: "The prime minister has been clear that a negotiated outcome at the end of the transition period remains our preference."