Britain is taking another small step out of lockdown as it looks nervously at a new virus surge inundating its European neighbors.

With U.K. coronavirus vaccination rates outstripping those of European Union nations, Prime Minister Boris Johnson is easing the stark “stay at home” message that has curtailed everyday life — and kept the virus in check — for almost three months. 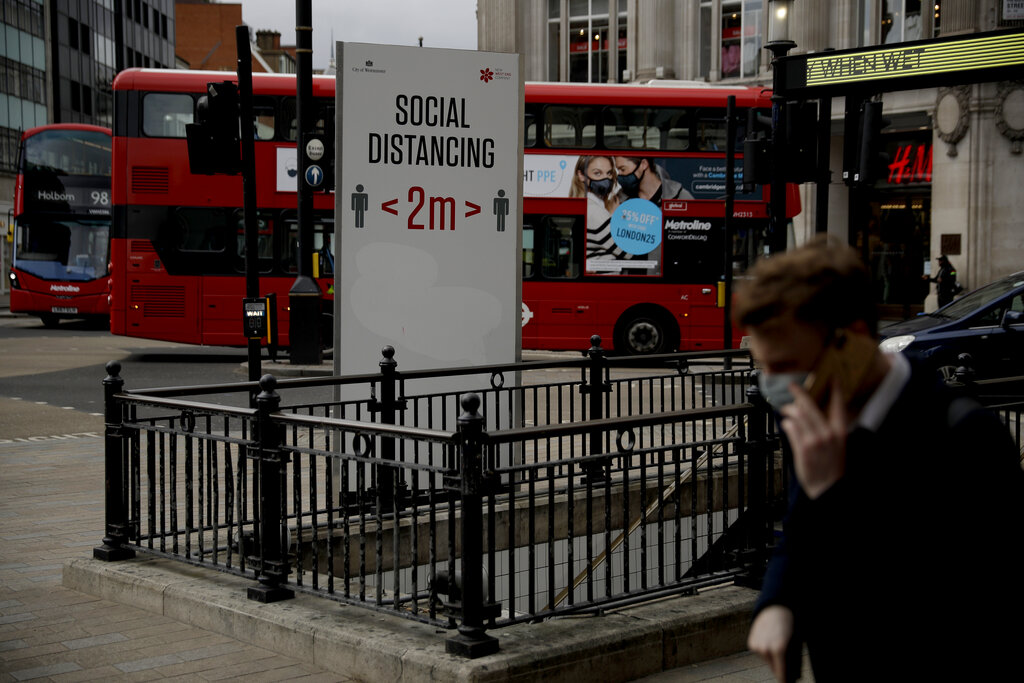 A large social distancing sign is displayed next to an entrance down into Oxford Circus underground train station, in central London, during England's third coronavirus lockdown, Friday, March 26, 2021. (Photo: AP)

From Monday, it will be replaced in England with a message to stay local. People will be allowed to meet in groups of six outdoors and can resume outdoor sports such as basketball, tennis and golf.

The other parts of the U.K. — Scotland, Wales and Northern Ireland — are taking broadly similar steps. In Wales, thousands of people poured onto beaches and beauty spots on Saturday, after the authorities lifted travel restrictions that have been in place since December.

Stephen Powis, medical director of the National Health Service in England, urged people to continue to follow the rules and limit contact with others, saying the easing “does not mean job done.”

“We’ve made enormous progress that we need to build on and not squander the gains we’ve made,” he wrote in the Sunday Telegraph newspaper.

The stringent restrictions in business and social life imposed during three lockdowns in the past year have had broad public support, though they have alarmed some lawmakers in Johnson’s Conservative Party, who argue that the economic, democratic and human costs outweigh the benefits.

Most nonessential businesses remain closed, along with pubs, restaurants, gyms, cinemas, theaters, museums and sports stadiums. Millions of workers have been furloughed, with the government paying the bulk of their wages.

While many European nations are seeing a new surge in the pandemic, Britain is counting on a rapid mass-vaccination program to help it end lockdown. Nearly 30 million people, accounting for 56% of all adults, have received a first dose of vaccine so far.

Britain aims to give everyone over 18 a first jab by July, with second shots delivered within 12 weeks of the first.

Health officials say the program will slow down in April because of a squeeze on supplies, in part because of a delayed order from India. The EU has also threatened to block shipments of vaccines from factories in the bloc unless drugmakers — notably Anglo-Swedish firm AstraZeneca — send more shots to EU nations.

Some European politicians, under fire for their slow vaccine programs, say Britain has failed to export any vaccine doses to the continent, while millions have gone the other way. Britain disputes that characterization, saying vaccines have complex supply chains and some ingredients in Europe’s shots are made in the U.K.

British Culture Secretary Oliver Dowden said the government was confident it would hit its vaccination targets. He said the first doses of a vaccine made by U.S. firm Moderna would arrive in Britain in April, joining jabs made by AstraZeneca and Pfizer-BioNTech.

“We’re confident we’ll be able to deliver it and we are confident that it won’t require mixing the vaccines,” Dowden told the BBC.

Under the government’s “road map” to lifting lockdown, shops, hairdressers and outdoor dining in England are to reopen on April 12, followed by indoor venues on May 17. Remaining restrictions are to end June 21, if the country isn't facing a new virus surge.

Anthony Harnden, deputy chair of Britain’s Joint Committee on Vaccination and Immunization, said it was vital that people who had received a vaccine shot remained cautious.

“It’s really important that people who are vaccinated can remember that they aren’t completely protected,” he told the BBC.

“They’re protected against severe disease, hospitalization and death, but they might not be protected against infection after one dose, it takes three or four weeks for the vaccine effects to kick in, and they could potentially still transmit.”