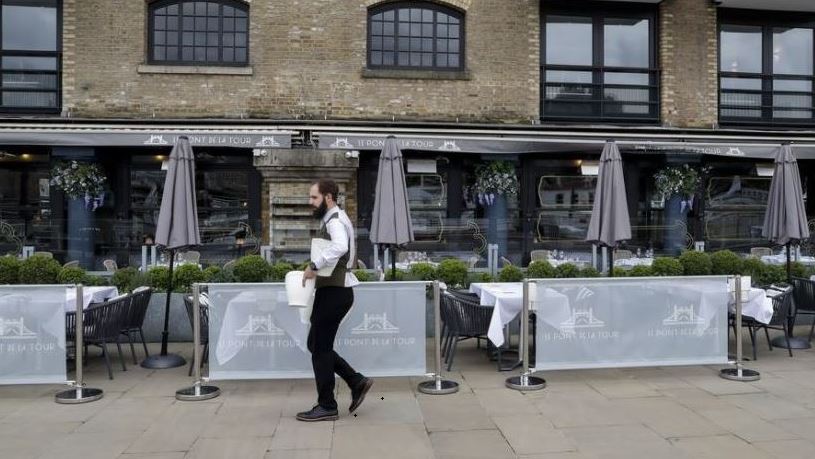 The headline seasonally adjusted flash composite output index stood at 55.3 in August, down from 59.2 in July, the slowest expansion of output since the private sector returned to growth in March, said the report published by IHS Markit, a London-based global information provider, and the Chartered Institute of Procurement & Supply (CIPS), a British-based global procurement and supply organization.

"Although the purchasing managers' index (PMI) indicates that the economy continues to expand at a pace slightly above the pre-pandemic average, there are clear signs of the recovery losing momentum in the third quarter after a buoyant second quarter," said Chris Williamson, chief business economist at IHS Markit.

Williamson said he believes that despite the lift of COVID-19 restrictions, "rising virus case numbers are deterring many forms of spending, notably by consumers, and have hit growth via worsening staff and supply shortages."

"An abnormally large slowdown in overall activity in August offers a stark warning to the UK economy that the accelerated levels of growth we've seen earlier this summer are not sustainable," said Duncan Brock, group director at CIPS.

"It was the slowest output expansion for six months, and the worst shortages of staff and materials on record are mostly to blame," Brock added.

In terms of the specific sectors, Britain's purchasing managers' index (PMI) for the manufacturing sector registered 60.1 in August, down from 60.4 in July and the lowest since March, the data showed.

Despite a slowdown in output growth during August, service providers signaled a robust and accelerated rise in employment numbers, said the report.

"The latest increase in staffing levels was the strongest since this index began in July 1996. Survey respondents typically commented on the need to boost workforce numbers in response to higher order books and depleted business capacity," said the report.

In addition, the survey showed a rebound in business sentiment to its highest since May, which ended a four-month sequence of falling confidence.

However, "it's likely that cautious consumers will continue to remain an obstacle for UK businesses until full confidence returns," he warned.

England lifted almost all its remaining COVID-19 restrictions since July 19. More than 87 percent of people aged 16 and over in Britain have had their first dose of vaccine and more than 76 percent have received both doses, the latest figures showed.